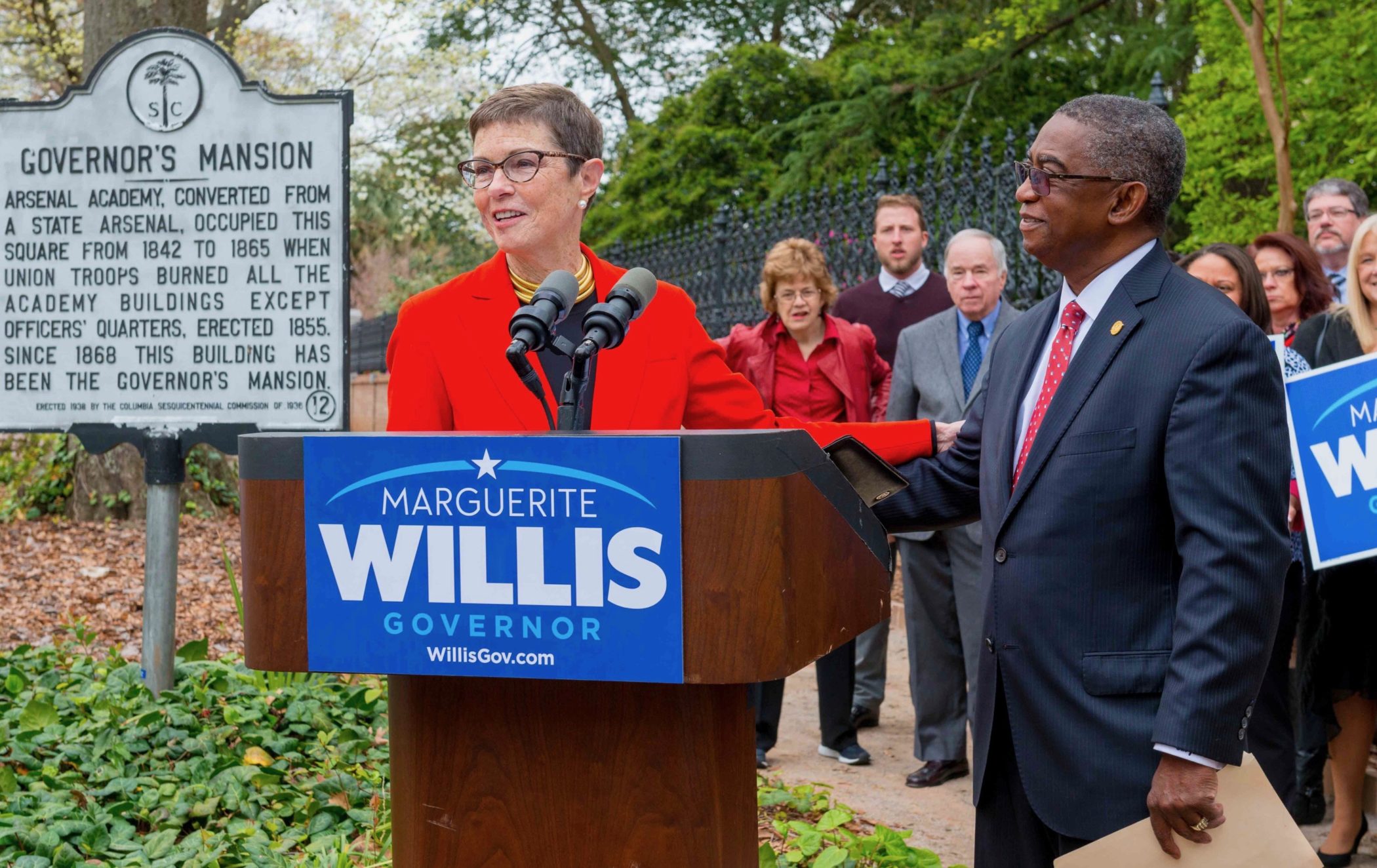 The race for governor of South Carolina took a bizarre turn this week when the most liberal candidate in the field defended the sanctity of marriage.

Isn’t that the job of the Bible thumpers?  We thought so …

Nonetheless, Marguerite Willis – a Florence, S.C. attorney who is one of three Democratic candidates for governor – said in a debate this week that one of the criteria voters should use in selecting the state’s next chief executive is whether they had “cheated on their wife.”

In a race with six male candidates, that’s a curious reference to make.  Unless of course Willis – who is married to former Florence, S.C. mayor Frank Willis – is invoking the progressive definition of the institution.  You know, opposed to the social conservative definition.

Anyway, Willis and fellow progressive Phil Noble – a Charleston, S.C. businessman – trained their fire for most of the debate on James Smith, the Afghan War veteran and former House majority leader whom many believe is the Democrats only hope of winning this election.

Among the issues discussed?  Smith’s alleged pro-Second Amendment voting record – which Noble repeatedly hammered him over.

“Until we have leaders who will stand up and challenge the NRA , we’ll never have safe schools and streets,” Noble said.  “That’s why I’m amazed. Amazed when I learned that James Smith was three times endorsed by the NRA because he supported their policies.”

But it was Willis’ remark on marriage that set tongues-a-wagging across the Palmetto political universe … prompting us to reach out to her in the hopes of getting some insight into the comment.

According to her, the “cheat on your wife” remark she offered up during the debate wasn’t directed at any candidate in particular – but was instead a reference to her own life.  Specifically, Willis told us she was talking about her first marriage – in which her former husband not only committed infidelity but also financial fraud, forging her name on checks and other documents.

“He cheated on me in spectacular fashion,” she said.

Willis said her past experiences – which she has invoked often on the campaign trail – have led her to embark on another campaign, one that promotes financial literacy and independence among young women.

“I turned that experience into basically a mission of mine – to talk to women about financial independence and how important it is to have your own separate money,” she said.

Of course infidelity still rubs her the wrong way, she told us.

“We’ve gotten to a point in politics where we tolerate this stuff,” she added.  “I’m a woman of faith.  We put our hand on the Bible when we take office.  You take an oath you should keep it.  We put these people up on a pedestal.  We put them on the steps of the state capital or the Congress up in Washington, D.C.  I just think we should be able to look up to our leaders – to respect them.”

Again, though, Willis made it clear she was not referencing any of her opponents – Democratic or “Republican.”

To be clear: We don’t care if a candidate for elected office has been faithful to their spouse (gay, straight or plural).

That’s between them and their significant other.  Period.

Unless tax dollars are involved – or unless a crime is being committed (or covered up) – you won’t see us peeping into people’s private lives.

(For a case that may fit both criteria, click here).

As for candidates for elected office, we care about three things: How much money they plan on spending, what they plan to spend it on and where they intend to raise it.

On that count, all three of the Democratic candidates for governor (and several of the GOP candidates) are unacceptable to us … but then again, that’s just our “litmus test.”

Got something you’d like to say in response to one of our stories? Please feel free to submit your own guest column or letter to the editor via-email HERE. Got a tip for us? CLICK HERE. Got a technical question or a glitch to report? CLICK HERE. Want to support what we’re doing? SUBSCRIBE HERE.
Banner: Willis For Governor