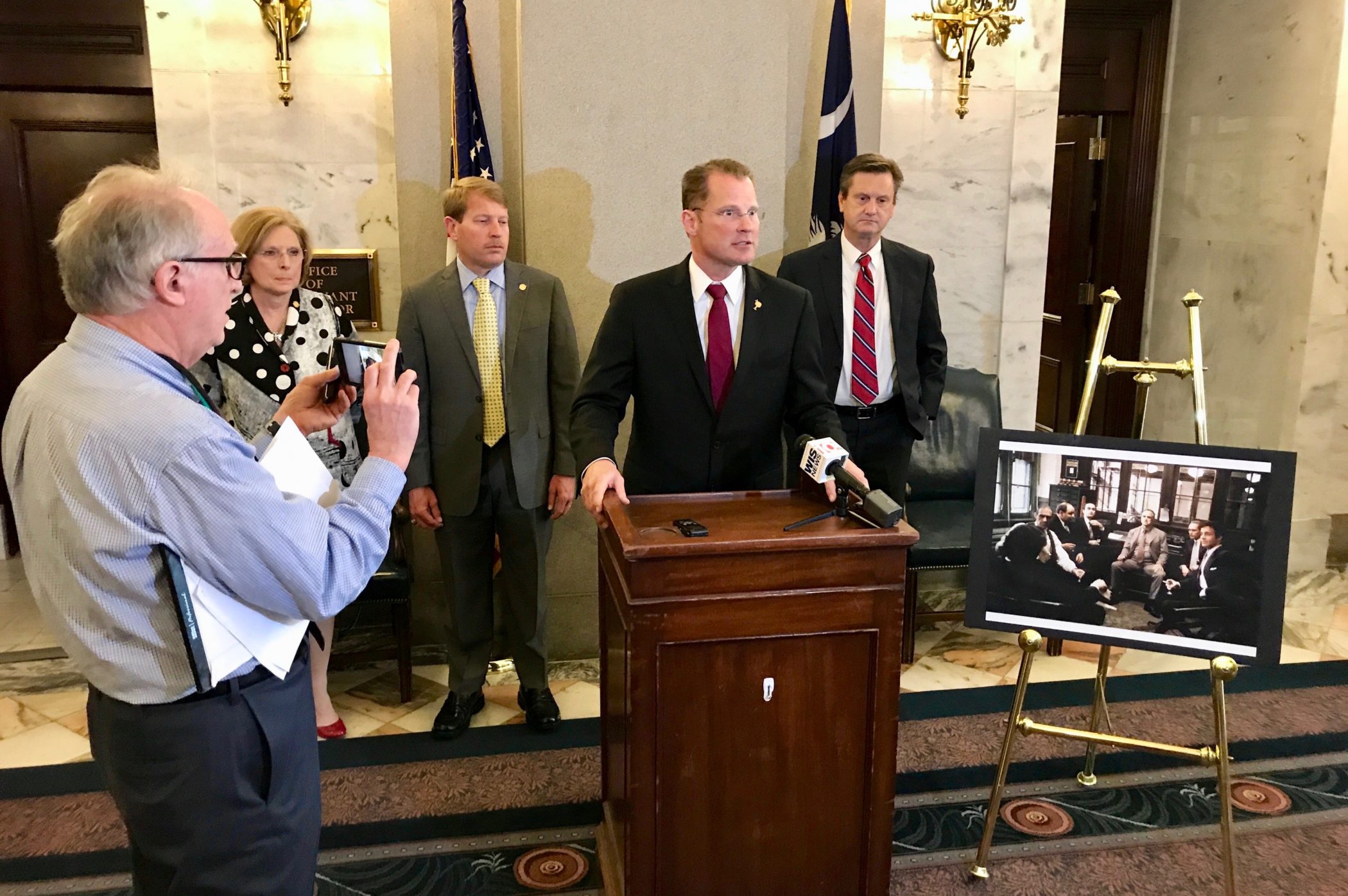 South Carolina lieutenant governor Kevin Bryant is promoting his anti-racketeering legislation this week – a series of proposals this news site exclusively reported on two weeks ago.

Bryant held an event on Wednesday at his office in the S.C. State House – flanked by state senators Tom Davis, Katrina Shealy and Shane Martin.  The purpose of the gathering?  To unveil a pair of bills Bryant says will help end the culture of corruption in Palmetto politics.

Bryant said two bills – S. 1189 and H. 5319 – “will eliminate the open range now enjoyed by lobbyists, consultants and those elected officials who view Columbia as their personal ATM.”

“The simple fact is that there has been a very organized effort for at least two decades to use the powers of elected office for personal gain,” Bryant said. “Everyone knows what happened, but the special prosecutor is having extreme difficulty prosecuting the bad actors.  That’s because the law fails to explicitly outlaw these organized and intentional efforts.”

He has specifically referred to the elder Quinn as “the Godfather,” echoing allegations made by S.C. first circuit solicitor David Pascoe over the course of the investigation.  In fact, Bryant has taken to carrying a screen grab from the legendary 1972 mob epic The Godfather along with him on campaign stops. 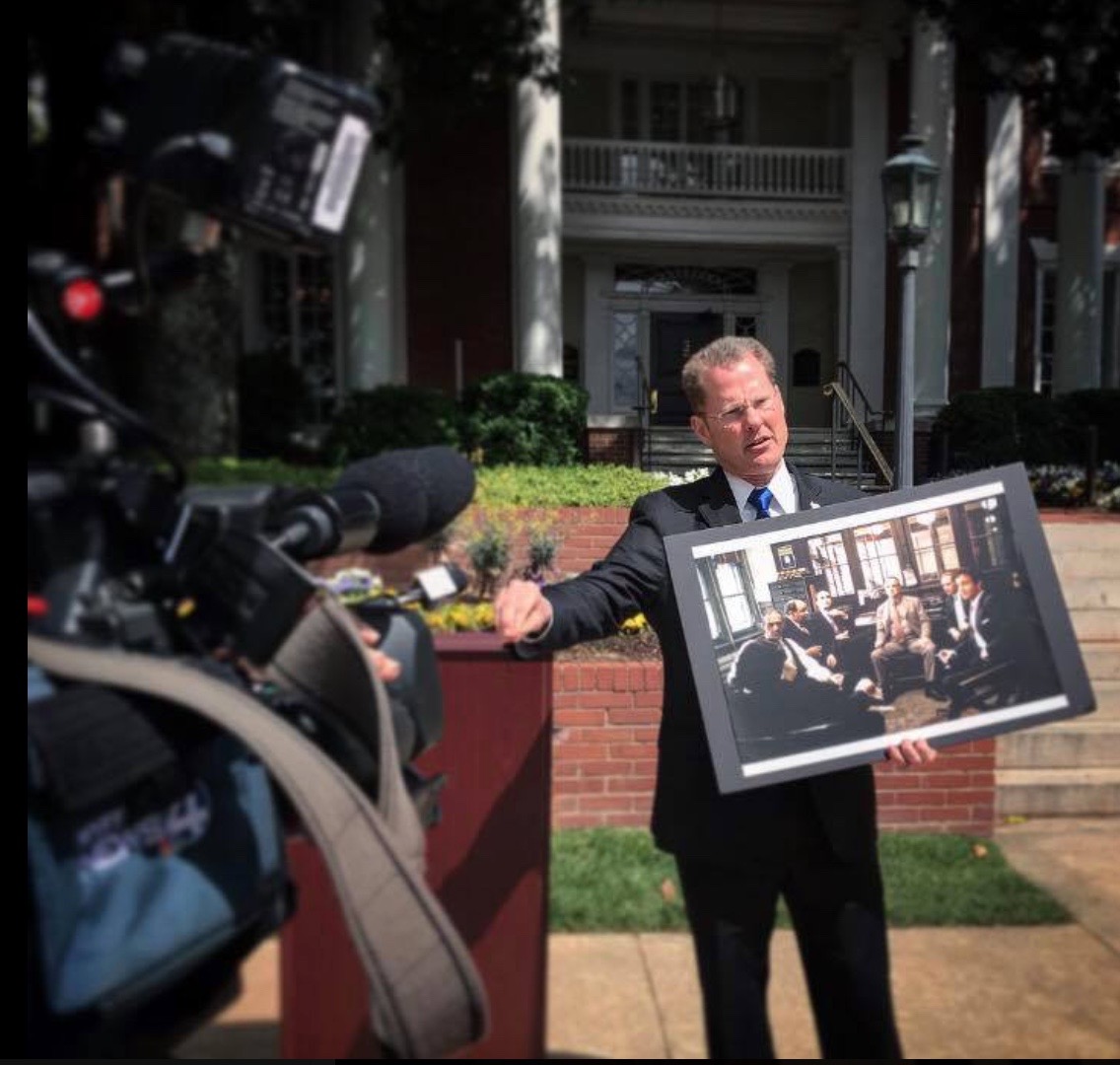 According to Bryant the Quinns’ empire – a.k.a. the “Quinndom” – began to unravel in 2013 when it was first referenced in the pages of an investigative report prepared by the S.C. State Law Enforcement Division (SLED).

“The Godfather got paid millions of dollars by some of the state’s biggest companies and state agencies to manipulate government on their behalf and for his personal gain,” Bryant said last month. “The family business never was a real secret in Columbia, but when SLED finally got a chance to inspect their records, they found evidence of not just an organization, but of organized crime.”

Bryant also accused the Quinns of participating in “mob-like activity.”

The younger Quinn has punched back … hard.

“None of what Mr. Bryant says is true and he knows it,” Quinn told us.  “All charges against my father were dropped.  And I pled only to a misdemeanor reporting violation.  We are exploring our legal options to hold Mr. Bryant accountable for these lies.”

As we noted in our coverage last month, Bryant is a bit of a conflicted messenger on this front.  Last fall, Democrats called for an ethics investigation of him after it was revealed his pharmacy collected $15.7 million in Medicaid payments and roughly $3.8 million from the South Carolina state health plan over the previous decade.

Trav Robertson – chairman of the S.C. Democratic Party (SCDP) – assailed Bryant at the time for his hypocrisy.

Bryant said he was within the letter of the law because he voted against Medicaid funding (i.e. against his own personal financial interests) – but the law doesn’t appear to specify whether that matters.

“It’s the fact he voted at all,” one lawmaker told us.

Quinn has also blasted Bryant on the Medicaid issue.

“Mr. Bryant’s opinion on ethics in government should hardly be trusted,” he told us. “He’s profited from the State to the tune of $16 million dollars since becoming a state senator.  This is largely from Medicaid and the state health plan.  All the time not recusing himself on the Health and Human Services budget votes.  Perhaps senate ethics or SLED should investigate him for these violations. I may file a complaint myself.”

According to our sources, an ethics compliant has been filed against Bryant – but Quinn has not said yet whether he was the one who filed it.

Quinn did step up his criticism of Bryant this week in response to the latter’s press conference – arguing that it was Bryant (not him) who failed to follow ethics laws.

“While Mr. Bryant was voting on agency budgets and then illegally receiving money from the agency, I recused myself in writing forty-nine times,” Quinn told us.

Bryant is obviously seeking to capitalize on the proximity between the Quinns and incumbent “Republican” governor Henry McMaster – one of his opponents in next month’s GOP gubernatorial primary election.  McMaster was affiliated with the Quinns for decades prior to unceremoniously jettisoning them last spring.

Of course Davis – one of the lawmakers who joined Bryant at his press conference – made it clear to us that his comments “were not specific to Quinn but in regard to the business-as-usual influence peddling that goes on routinely at the State House.”

He also said his decision to sponsor legislation related to Bryant’s anti-racketeering push was not “Quinn-specific.”

“In recent years there has been an alarming rise in the number of revolving-door lobbyists – a phrase I use to refer to politicians and public officials who cash in on their government experience in order to become influence peddlers in Columbia,” Davis told us.  “Simply put, these revolving-door lobbyists have privileged access to former employers that others simply do not have, and they are hired by those seeking governmental favor simply because of their ability to get a foot in the door.  This bill would lock that revolving door, not just for one year as now proscribed, but forever.”