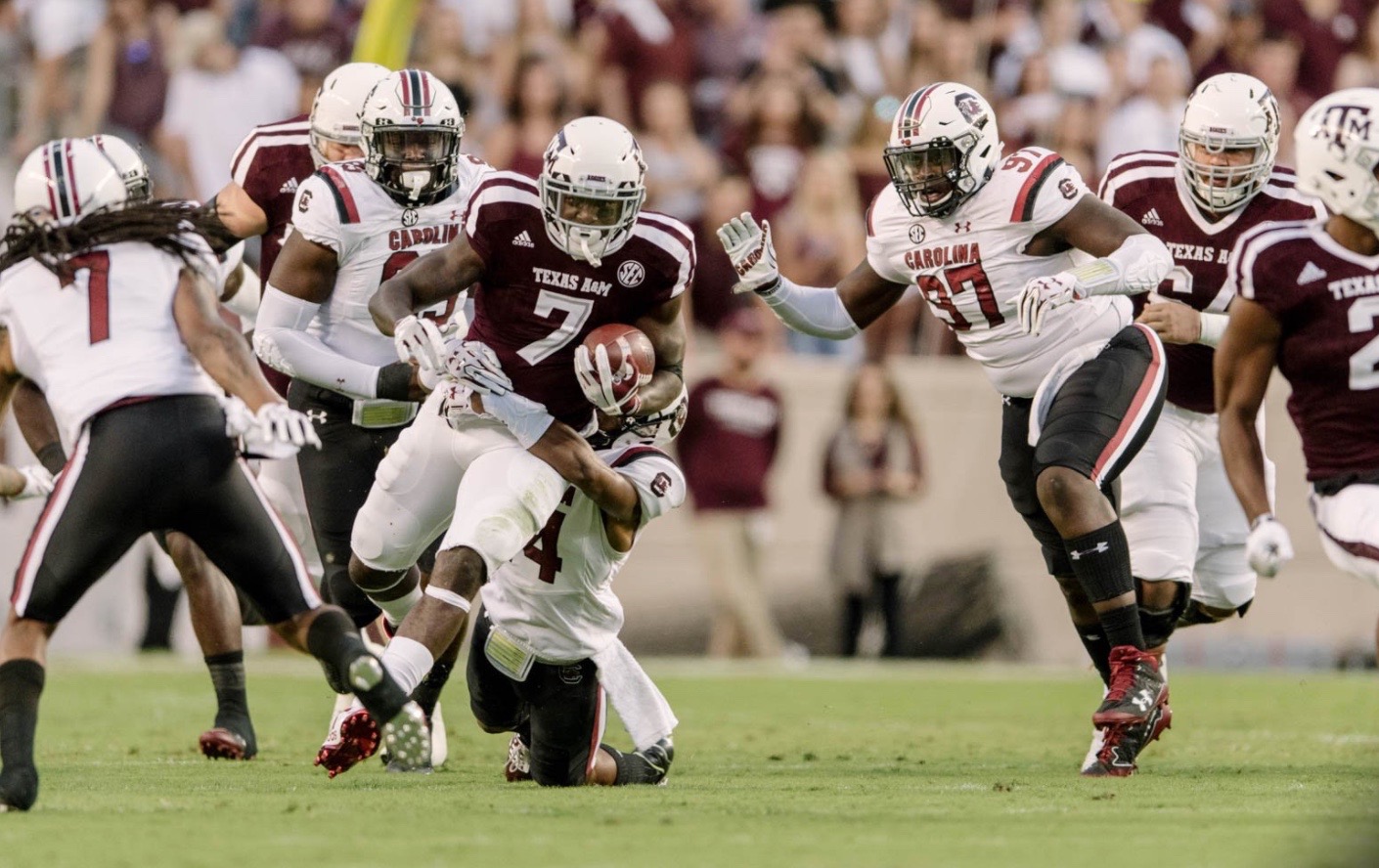 A history-making, potentially season-saving victory was in sight for the University of South Carolina football team in College Station, Texas on Saturday night … but the Gamecocks let it slip away.

Texas A&M rattled off seventeen unanswered points during the final sixteen minutes of the game.  Not only that, the Aggies’ defense completely shut down South Carolina’s offense in the fourth quarter to claim a come-from-behind 24-17 win over Will Muschamp’s Gamecocks (3-2, 1-2 SEC).

Had the Aggies (4-1, 2-0 SEC) lost, it might have been the end of the road for embattled head coach Kevin Sumlin.  Instead, it was yet another example of South Carolina’s program failing to finish off a quality opponent it had on the ropes late in the second half.

South Carolina led Texas A&M 17-7 with 7:31 left on the clock in the third quarter – and had the ball.  It seemed the Gamecocks were destined to win their first game in the Lone Star State in sixty years – and take a critical step forward as a program in the process.

Destiny changed, though.  Quickly … and violently.

The bipolar Gamecock offense lost four yards on its next three plays – the first of four consecutive three-and-outs that would see the team surrender a total of thirty yards over twelve plays.  That’s an average of -2.5 yards per play, for those of you keeping score at home.

Sophomore quarterback Jake Bentley was sacked four times during the collapse – and seven times overall on the evening.  The 6-foot-3, 220-pound native of Opelika, Alabama fell to 7-5 since taking over as South Carolina’s starting quarterback midway through the 2016 season.

For his part, Bentley completed 17 of 30 passes for 256 yards and a pair of touchdowns, but he simply couldn’t get the Gamecock offense going when it mattered.

After South Carolina took a 10-point lead on a 13-yard scoring strike from Bentley to true freshman OrTre Smith midway through the third quarter, the Gamecocks would post a net loss of four yards on their next five drives.

“The 12th Man was unbelievable,” Aggies’ offensive lineman Eric McCoy said after the game.  “They brought the intensity for us.”

While Texas A&M’s comeback eases some of the pressure on Sumlin, several of South Carolina’s coaches are (or should be) beginning to feel a bit of heat under their seats – including co-offensive coordinators Kurt Roper and Bryan McClendon.

Also, at some point there has to be some discussion about Bentley’s father, running backs coach Bobby Bentley.  As has been the case all season, the Gamecocks simply couldn’t run the ball – allowing the Aggie defense to zero in on the South Carolina passing game.

In fairness, the Gamecocks were without a pair of starting offensive lineman – junior right tackle Zack Bailey and senior right guard Cory Helms.  Meanwhile junior left tackle Malik Young left the game with an ankle injury in the first half and did not return.