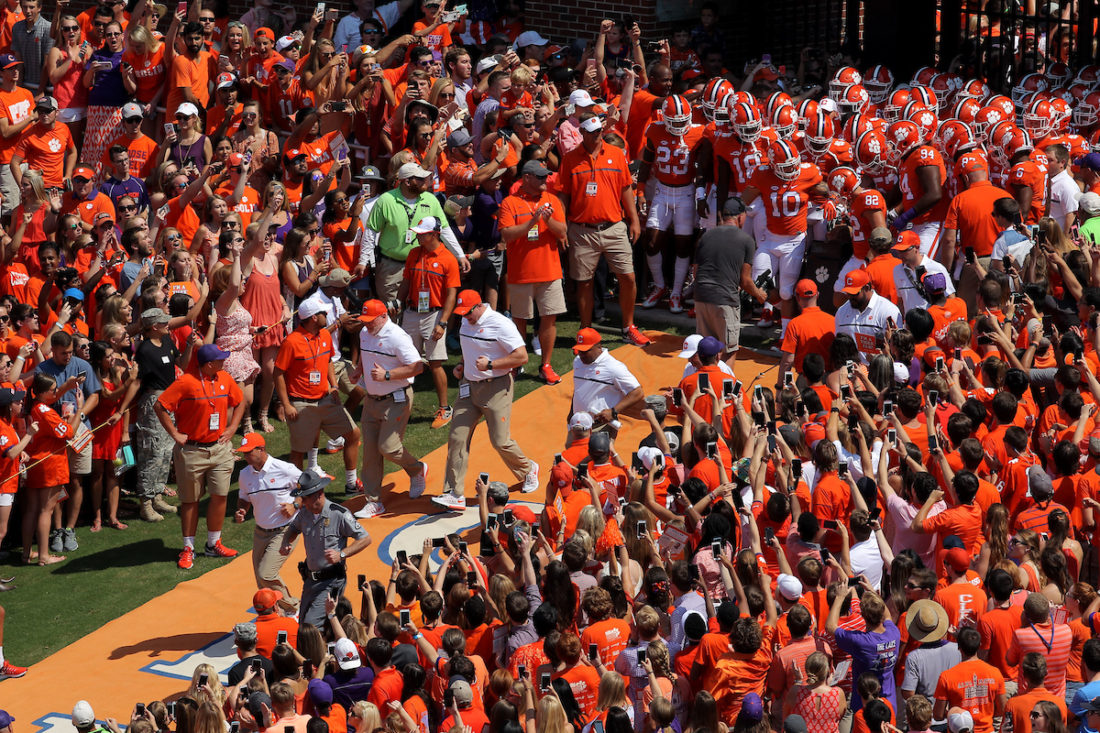 Clemson University agreed to new eight-year, $54 million contract with Dabo Swinney on Friday – a deal which will keep the 47-year-old head football coach in Tigertown through 2024.

Swinney’s deal will pay him $6 million annually this year – not counting a $1.5 million signing bonus or a $1 million up-front insurance premium payment.

His annual compensation will rise to $6.6 million per year over the life of the contract.  Bonuses could add another $1 million per year to Swinney’s salary if Clemson wins Atlantic Coast Conference (ACC) and national titles – and if Swinney earns coach of the year honors.

Swinney becomes only the second coach in college football history to receive annual compensation exceeding $7 million in a given season (Alabama’s Nick Saban is the other).

Courtesy of the university, here’s a look at the details of Swinney’s new contract …

Swinney’s teams have posted an 89-28 record over his eight-and-a-half seasons as head coach – including a 54-15 record in ACC play.   The Tigers have won at least ten games in each of the past six seasons, including back-to-back 14-win campaigns.

In each of those campaigns, Clemson advanced to the national championship game against Southeastern Conference (SEC) powerhouse Alabama – falling to the Tide following the 2015 campaign but winning last season’s title on a thrilling last-second touchdown pass from quarterback Deshaun Watson to wide receiver Hunter Renfrow.

“Dabo’s impact on our football program, our university and our community is immeasurable and goes well beyond the on-field successes and national championship,” said Clemson athletics director Dan Radakovich. “This new agreement demonstrates our strong commitment to Dabo and our confidence in his leadership now – and in the future – and his long-term commitment to Clemson. We are thrilled that he and his family will be a part of the Clemson Family for years to come.”

“My family and I have been extremely blessed to be part of such an incredible university and community for the past 14 years,” Swinney said.  “This contract makes a strong statement.  It is a mutual commitment reflective of the program we have built and continue to build at Clemson.   The Clemson family does so much to support our program and I couldn’t be more proud to be your head coach.”

Clemson enters the 2017 season ranked No. 5 in the nation.  The Tigers (0-0, 0-0 ACC) open their national title defense on September 2 against unranked Kent State.   Kickoff from Death Valley is currently scheduled for 12:00 p.m. EDT with ESPN providing national coverage.