A few nights ago I was asked by Will Folks to write a column for FITSNews.  He simply asked me to supply the answers to two questions; 1. Why am I running for Congress? 2. Why voters need options beyond the two-party slate?

So here it goes …

First of all, let me introduce myself. I am Josh Thornton, the American Party candidate in the special election for the South Carolina fifth congressional district seat in the U.S House of Representatives. I have been an educator for 19 years, a husband for 16 years and a father for 10 years.

I have zero years experience with holding public office, yet I have proposed as many bills that have passed the House as Mick Mulvaney did in his six-plus years in office, zero.

As a resident of York County, S.C. for the past 13 years, I have voted in too many unopposed elections.  After the 2016 election cycle, I made a promise to myself that I would do everything in my power to get on the ballot of any unopposed race.  I thought I would have to wait until 2018, but Mulvaney and president Donald Trump had different plans.  Once Mulvaney was sworn in as Trump’s White House budget director, a large group of Republican candidates quickly threw their names into the race.  At the time there was no talk about a Democratic nominee, so I began to seriously research how to get my name on the ballot.

After a few days of research, I found the American Party of South Carolina. The American Party is the only party in South Carolina that mandates a strict 12-year term for all its candidates and requires full transparency with financial disclosures and campaign finances.  I had a few meetings with the AP chairman Dr. James Rex during half time at Winthrop Basketball games.

We both liked what we heard and I filed the next Monday as the AP candidate to represent the fifth district.

The above is the logistical reason of why I am running in this race, but I have more reasons.  For years I have watched our representatives claim to be the voice of their district, but in reality they become obedient followers of their party.  I have also been told that you have to be wealthy to be able to run for office.  This idea became especially troubling to me because the majority of the citizens of the fifth district are not wealthy.

The House of Representatives of the United States was formed to give voice to the common men and women of our country.  When you look at this special election on June 20, the two major party candidates are millionaires. Politics and campaigns have become all about money.  I want to be a candidate that most of the citizens of SC5 can relate to as I share many of their same concerns.  The other major party candidates have not been concerned with sacrificing wants to fulfill their needs, but many people of the fifth district have.  I want to send the message that ideas and solutions are worth more than money.

Lastly,  the fine people of the fifth district need to feel like they have someone they want to vote for instead of having to choose the “lesser of two evils.” South Carolinians need to ask themselves if they were excited during the last election cycle?  If they were merely voting to keep someone out, then it is time for a change.  We need competition in these races in South Carolina.  We need competitive general elections, not just competitive Republican primaries. 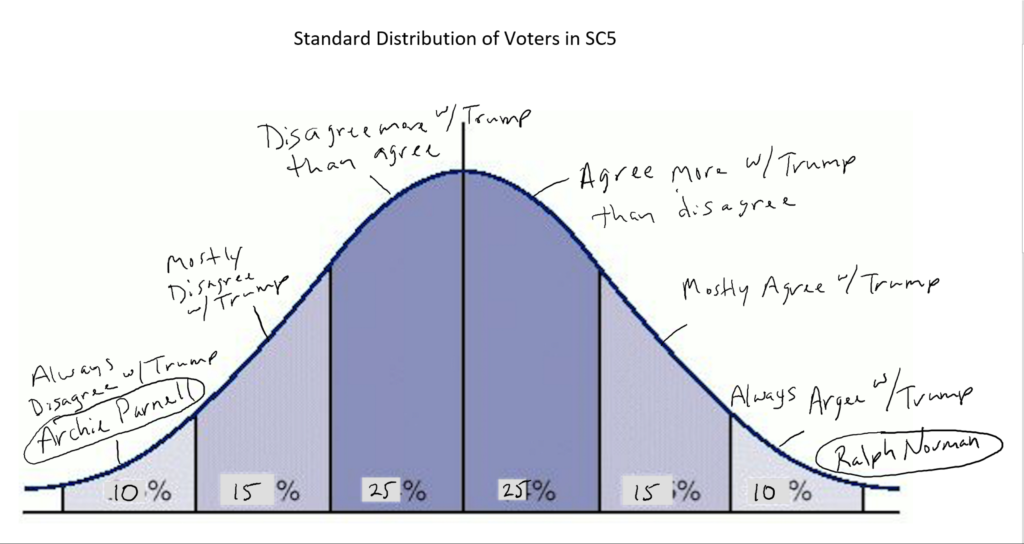 If you want to learn more about this distribution of voters, I’ve prepared a video explaining the chart.

Government should be by the people and for the people, not by the rich and for the party.  It’s time to give the people of South Carolina a choice who truly cares for their needs not the needs of the party.  We can send a huge message to Washington and the rest of the country that we want to be represented by a citizen with the same concerns as the majority of the people of SC5 and not by career politicians and millionaires.