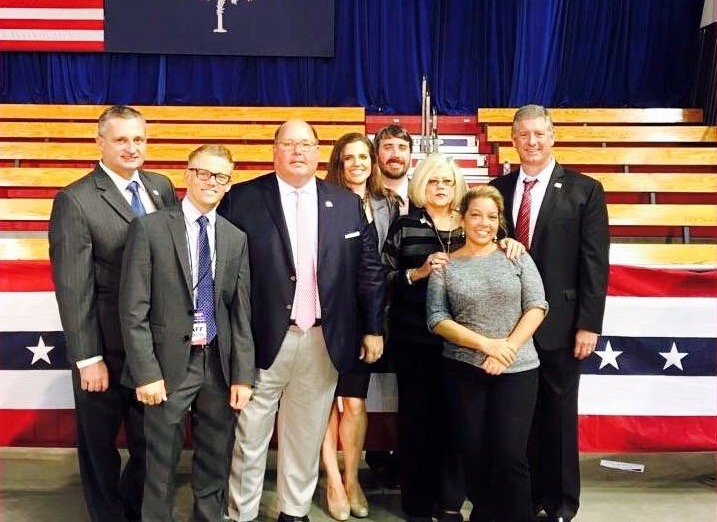 Reporter Jamie Self of The (Columbia, S.C.) State newspaper landed herself a nice scoop this week.  According to Self, South Carolina strategist Ed McMullen – the man who guided U.S. president Donald Trump’s 2016 campaign to an impressive victory in the pivotal “First in the South” presidential primary – will be rewarded for his efforts with a top diplomatic post.

McMullen (above, center) “is being vetted for a position with the Republican administration, possibly an ambassadorship,” Self reported.

Where is the veteran operative headed?

The most popular rumor we’ve heard is that McMullen is being vetted as the next U.S. ambassador to Switzerland, but neither he nor our sources at the White House are commenting on the matter.

Some speculate McMullen is being eyed by Trump as the next U.S. ambassador to Italy.

Until it’s official (which could be a lengthy process) … who knows.

What we do know is McMullen played a substantial role in Trump’s upset victory last fall.  In addition to his work in South Carolina, he was a close advisor to Trump during his 2016 general election campaign as well a key member of his transition team.

Related Topics:Donald TrumpEd McMullenfirst in the southsouth carolina presidential primaryU.S. Ambassador to SwitzerlandU.S. Department of State
Up Next