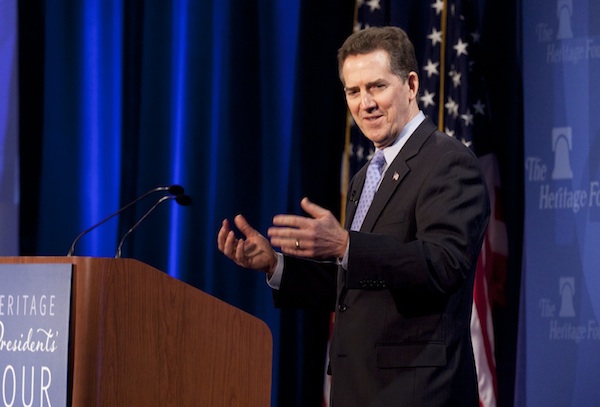 FORMER U.S. SENATOR SEES HIS FUTURE OUTSIDE OF PUBLIC OFFICE …

A longtime aide to Heritage Foundation president Jim DeMint says the conservative ideologue would be unlikely to stand for election again in the event he is forced from his current position with the Washington, D.C.-based think tank.

“I have no reason to think he’d be interested in running for elected office,” Weaver told us over the weekend.

Rumors of DeMint’s ouster from the so-called “conservative” think tank has fueled speculation that he might run for governor of South Carolina – or challenge the state’s uber-liberal “Republican” U.S. Senator, Lindsey Graham.

Weaver doesn’t think either of those scenarios will unfold, though.

“He left the Senate because he believed he could make a bigger impact outside the system,” she said.  “If anyone doubts he was right about that, three words: Justice Neil Gorsuch.”

Weaver is referring to Heritage’s advocacy on behalf of president Donald Trump‘s first pick for the U.S. Supreme Court, who was narrowly confirmed last month after Senators invoked the so-called “nuclear option” against filibustering Democrats.

Very few fiscal and social conservatives in South Carolina would argue that point.

“He is still the conservative gold standard in South Carolina and I look forward to seeing how he channels his influence to push the right ideas in new ways here at home and nationally,” Weaver told us.

So Bakari Sellers Got Popped For DUI