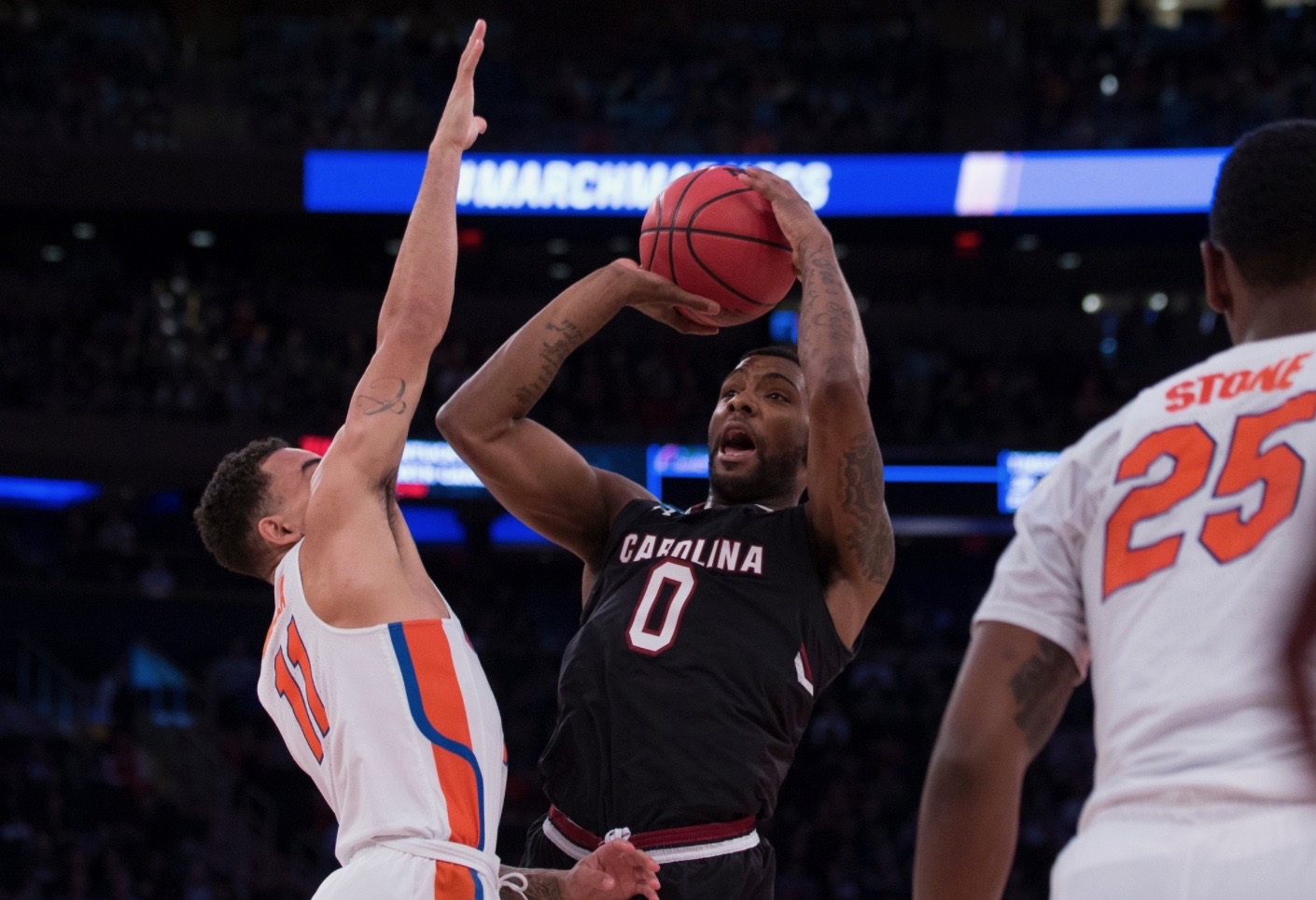 Now they can’t seem to stop … winning the program’s first-ever regional championship as a No. 7 seed.  After a forty-four year drought between NCAA tournament wins, the Gamecocks (26-10) advanced to their first-ever Final Four on Sunday with a 77-70 win over Southeastern Conference (SEC) rival Florida at Madison Square Garden in New York City.

Up next?  A date in the national semi-final game against Gonzaga (36-1) – the top seed in the West Regional and the No. 2 overall seed in the “Big Dance.”  Oddsmakers in Las Vegas quickly installed Gonzaga as a 6.5-point favorite over the Gamecocks for the April 1 tilt in Phoenix, Arizona – but our guess is that line would narrow if they were able to watch some film of South Carolina’s “Tenacious D.”

The latest gritty, improbable win for head coach Frank Martin‘s squad didn’t just keep its dream season alive – it also established a new school record for victories in a season, breaking a mark set back in 1969-70 (and tied last year).

Not surprisingly, Thornwell was named the East Regional’s most valuable player …

Sophomore guard PJ Dozier added seventeen points and three rebounds against Florida while sophomore forward Chris Silva contributed 12 points and nine boards for the Gamecocks – who wore down yet another quality opponent in the second half with their pressure defense.

In fact credit Martin for making a key halftime adjustment against the Gators, who were getting – and making – open three-point looks during the first half.  After watching Florida hit at a 58 percent clip from behind the three-point arc during the first twenty minutes, Martin switched the Gamecocks to an extended zone defense in the second half.

It paid off as the Gators went 0-for-12 from three-point land during the final twenty minutes.

Still, the all-SEC Elite Eight battle remained a nip-and-tuck affair – with South Carolina taking its first lead of the second half at the 11:34 mark on a tip-in by freshman forward Maik Kotsar.  Averaging less than six points per game on the season (and just three points per game during the tournament), Kotsar went for 12 points against Florida – including a clutch twelve-foot jump shot at the 1:55 mark to give South Carolina a four-point lead.

South Carolina is the third No. 7 seed in the last four years to make the Final Four, joining Michigan State in 2015 and eventual national champion Connecticut in 2014.  The Huskies were the lowest seed to win the national title since Villanova, which won the tournament as a No. 8 seed in 1985.

Since the NCAA began designating seeds in 1979, only five teams seeded No. 4 or lower have won the championship (NC State in 1983, Villanova in 1985, Kansas in 1988, Arizona in 1997 and Connecticut in 2014).  By contrast, a whopping 33 teams seeded either first, second or third have won titles over that time frame.