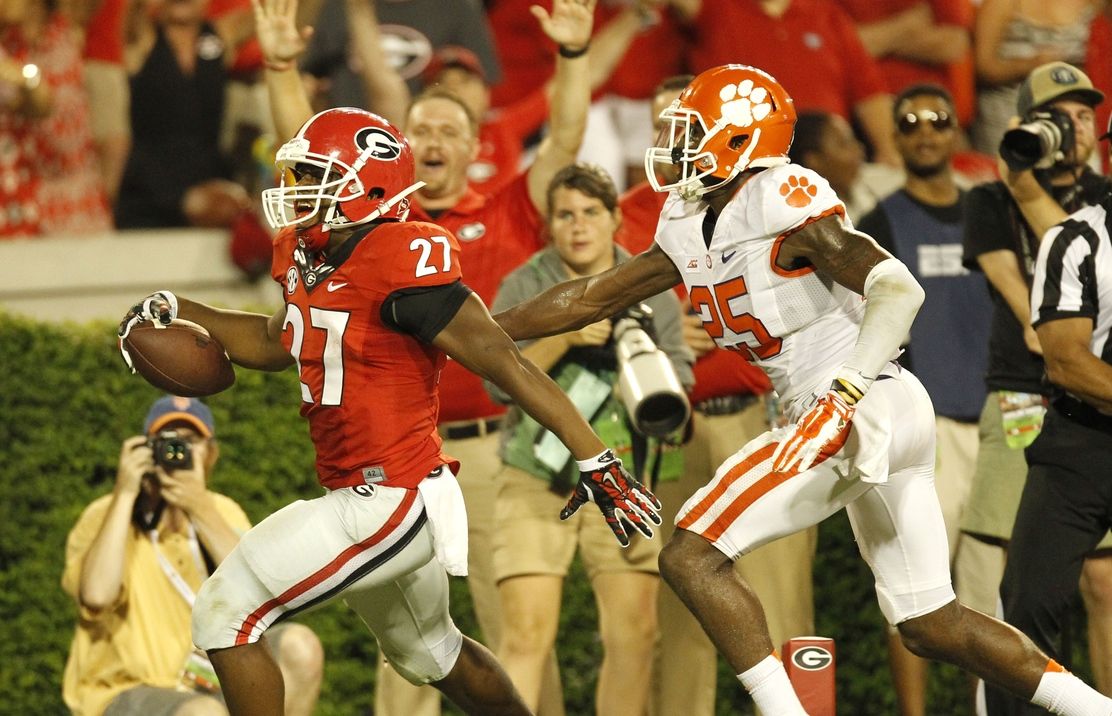 GEORGIA RUNS OVER CLEMSON IN SECOND HALF …

Misery must love company in the Palmetto State …

Two days after No. 9 South Carolina was eviscerated by Texas A&M, the Gamecocks’ in-state rivals received a beat down of their own.

No. 16 Clemson seemed in position to make it a close game on the road against twelfth-ranked Georgia – leading 21-14 midway through the second quarter – but its high-octane offense was completely shutdown in the second half.

The Tigers punted seven times, earned just one first down and gained only fifteen yards after intermission – with quarterback Cole Stoudt failing to move coordinator Chad Morris’ offense against coordinator Jeremy Pruitt’s Bulldog defense.  Meanwhile the Bulldogs’ Heisman Trophy candidate Todd Gurley ran wild – scoring on touchdown runs of 18 and 51 yards in the fourth quarter to put the game out of reach.

Gurley finished the evening with a career-high 198 yards and three rushing touchdowns.  He also returned a kickoff 100 yards for another score – breaking Rodney Hampton’s 1987 single-game Georgia record for all-purpose yardage when it was all said and done.

“I think he’s the best player in America,” Georgia coach Mark Richt said of his star tailback, “or at least one of them.”

After an off week, the 6-foot-1, 226-pound junior from Tarboro, N.C. will take his Heisman quest to Williams-Brice Stadium on September 13 against the Gamecocks.

One bright spot for the Tigers’ offense?  True freshman quarterback DeShaun Watson.  The heralded high school quarterback (and Georgia native) completed two of four passes for 59 yards and a touchdown in limited action.

Unfortunately for Tiger fans, head coach Dabo Swinney didn’t give Watson much of a chance in the second half – choosing to put the game in Stoudt’s hands.  The 6-foot-4, 210-pound senior from Dublin, Ohio couldn’t get anything going, though – as Georgia’s halftime defensive adjustments overwhelmed Morris’ offense, operating for the first time in three years without quarterback Tajh Boyd and wide receiver Sammy Watkins.

“(Fans) might not see it,” Bulldog safety Corey Moore said last week, “but we know as a defense that we have improved.”

Clemson’s defense – led by talented end Vic Beasley – played well, but ran out of steam late in the game after the Tigers’ offense kept producing three-and-outs.

“We’ve got to prepare harder and get better,” Stoudt said.

Clemson (0-1, 0-0 SEC) plays S.C. State in its home opener next week before traveling to Tallahassee, Florida on September 20 for a matchup with the top-ranked Florida State Seminoles.