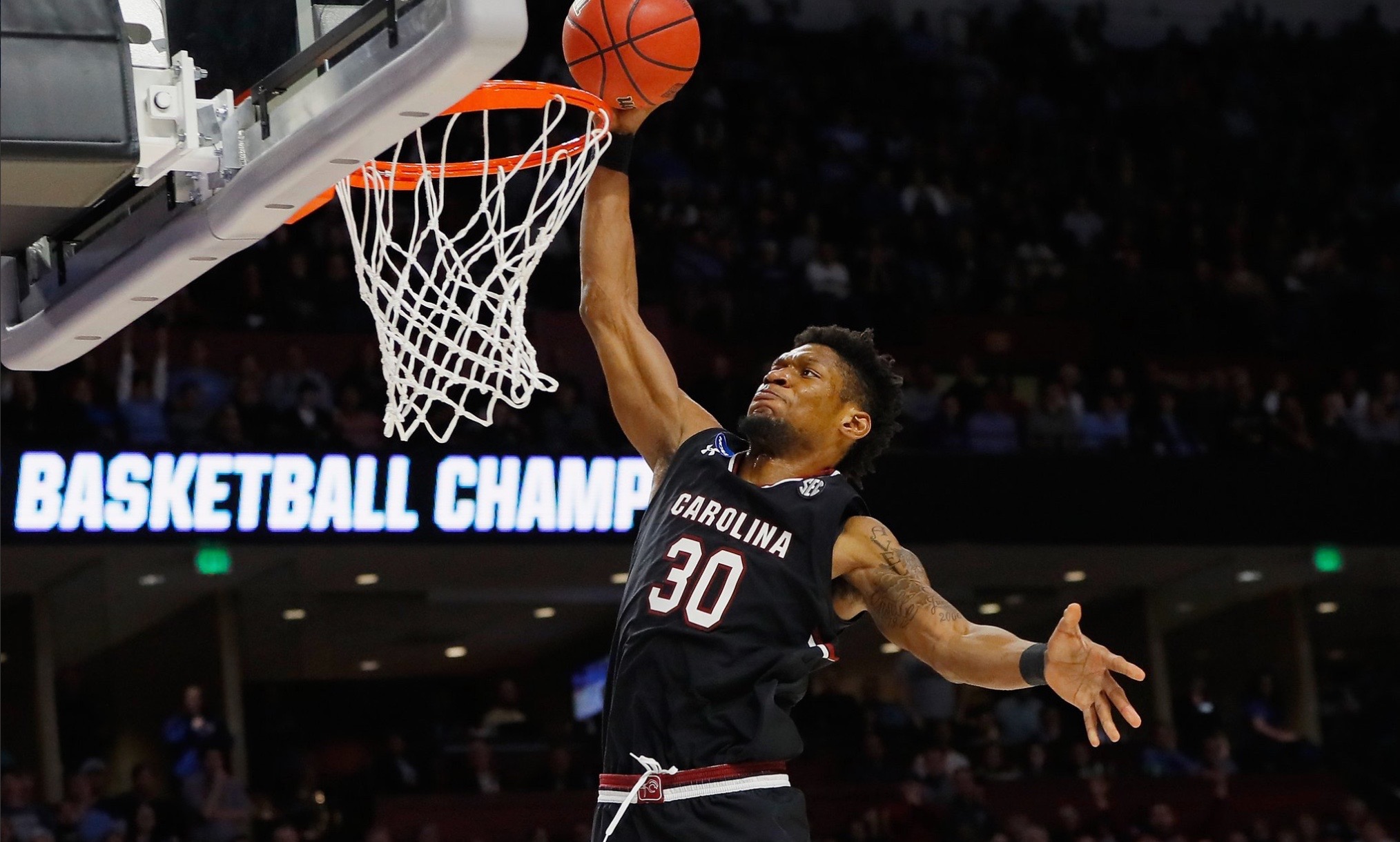 And with reigning Southeastern Conference (SEC) player of the year Sindarius Thornwell playing at the top of his game – even bigger victories could be ahead.

“We’re not satisfied,” Thornwell said after leading his team to another history-making tournament win. “We’re in it, so why not win it?”

Seventh-seeded South Carolina – which hadn’t even been to the NCAA tournament since 2004 – advanced to the Sweet Sixteen on Sunday evening with a shocking upset over second-seeded Duke at Bon Secours Wellness Arena in Greenville, S.C..

Head coach Frank Martin‘s Gamecocks (24-10) overcame an atrocious first half on offense – and a ten-point deficit early in the second half – to defeat the streaking Blue Devils (28-9), who won the title two years ago and have five NCAA championship banners under Hall of Fame head coach Mike Krzyzewski.

Unable to buy a basket in the first half, the Gamecocks’ stultifying defense kept things close long enough for South Carolina’s shots to start falling.  And fall they did.  After hitting on only seven of thirty-five attempts (20 percent) from the floor during the first twenty minutes of the game, South Carolina more than tripled its shooting success in the second stanza – connecting on 20 of 28 shots (71 percent).

Duke had never seen anything like it.  Literally.  In fact according to ESPN, South Carolina’s 65 second half points were the most scored in a single half against a Krzyzewski-coached Blue Devil team … ever.

As he has all season, Thornwell led the way – scoring 24 points.  Sophomore forward Chris Silva poured in 17 points and grabbed 10 rebounds – while senior guard Duane Notice chipped in 17 points.  As they have all season all three played standout defense, too … helping South Carolina force eighteen Blue Devil turnovers.

“That’s the most physical team we have played all year,” Krzyzewski said after the game.

Can the Gamecocks keep their physical play going as the brackets tighten?

Martin has been here before.  He led Kansas State to an Elite Eight appearance in 2010 – two years before former South Carolina athletics director Eric Hyman hired him to take over a South Carolina program in shambles.

After posting an anemic 28-38 mark during his first two seasons in Columbia, S.C. (including a catastrophic 9-27 conference mark), Martin’s third squad went 17-16.  Last year’s squad won 25 games – but it wasn’t quite enough to break into the NCAA tournament.

This year South Carolina is not only in it – they’re winning.

“My seniors, when they were freshmen, they were losing,” Martin said after the game.  “They never gave into losing.”

"My seniors, when they were freshmen, they were losing. They never gave into losing." – Frank Martin #MarchMadness pic.twitter.com/OScXnDaNmw

“This is a special group of guys,” Martin added.  “They’re taking me for a heck of a ride right now.”

South Carolina has been to the Sweet Sixteen three times before (1971-1973), but each of those appearances came when the NCAA tournament was a 25-team affair.  Prior to this year, the Gamecocks had made it to “March Madness” just four times since the tournament field expanded to 64 (and more recently 68) teams – losing in their opening game each time.

South Carolina plays No. 3 seed Baylor in the East Regional semifinals on Friday at Madison Square Garden in New York City. That game tips off at 7:29 EDT and will be televised nationally by TBS.  South Carolina played a home-and-home series with Baylor earlier during Martin’s tenure, losing a pair of close games to the Bears.