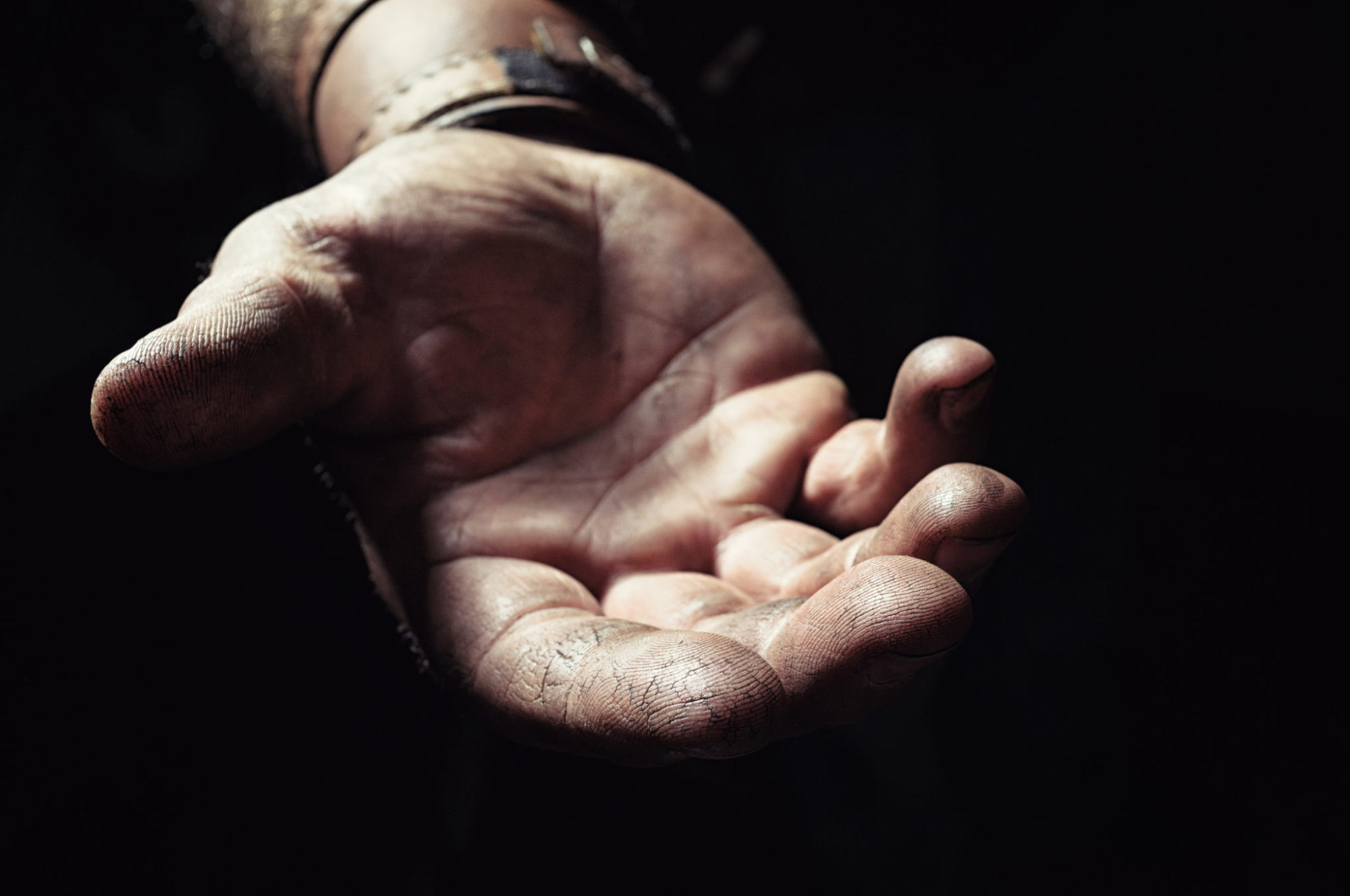 Earlier this week, reporter Cynthia Roldán of The (Columbia, S.C.) State newspaper filed a story in response to our coverage of an ongoing budget drama at the S.C. State House.

In her report, Roldán made a passing reference to the Palmetto State’s budget being “roughly $8 billion.”

Is she correct?  Sure … assuming you only want to count the portion of the state budget that’s funded with revenue from taxes (a.k.a. “general funds”).  As we have repeatedly pointed out, there is another $10.8 billion in state funds collected from fees and fines – and another $8.6 billion on top of that in federal funds.

Oh, and these totals don’t include an estimated $1.5 billion worth of food stamps – which state lawmakers conveniently excluded from the state budget beginning in 2014.

Anyway, state lawmakers exert exclusive control over the $10.8 billion in “other funds.”  They also have broad discretion in appropriating the $8.6 billion in federal money.

Which got us thinking …

How does South Carolina stack up to the rest of the nation when it comes to the federal funds it receives?

According to a recent analysis from the pro-free market Mises Institute, the Palmetto State ranks fifth in the nation in terms of federal spending per dollar paid in taxes … receiving $3.05 for every dollar sent to Washington, D.C. 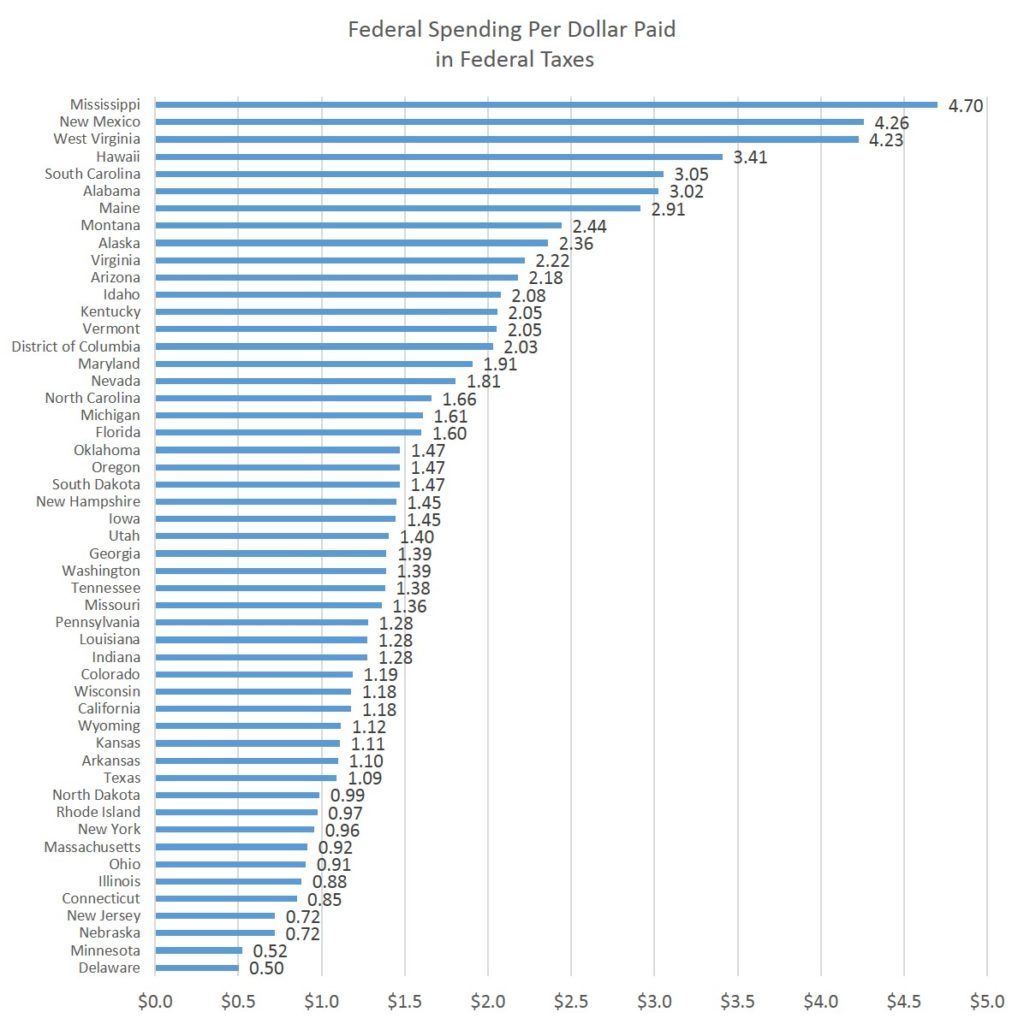 When it comes to federal spending as a percentage of gross domestic product, South Carolina ranks eighth nationally – with “manna from Washington” comprising a whopping 26.8 percent of our state’s economy. 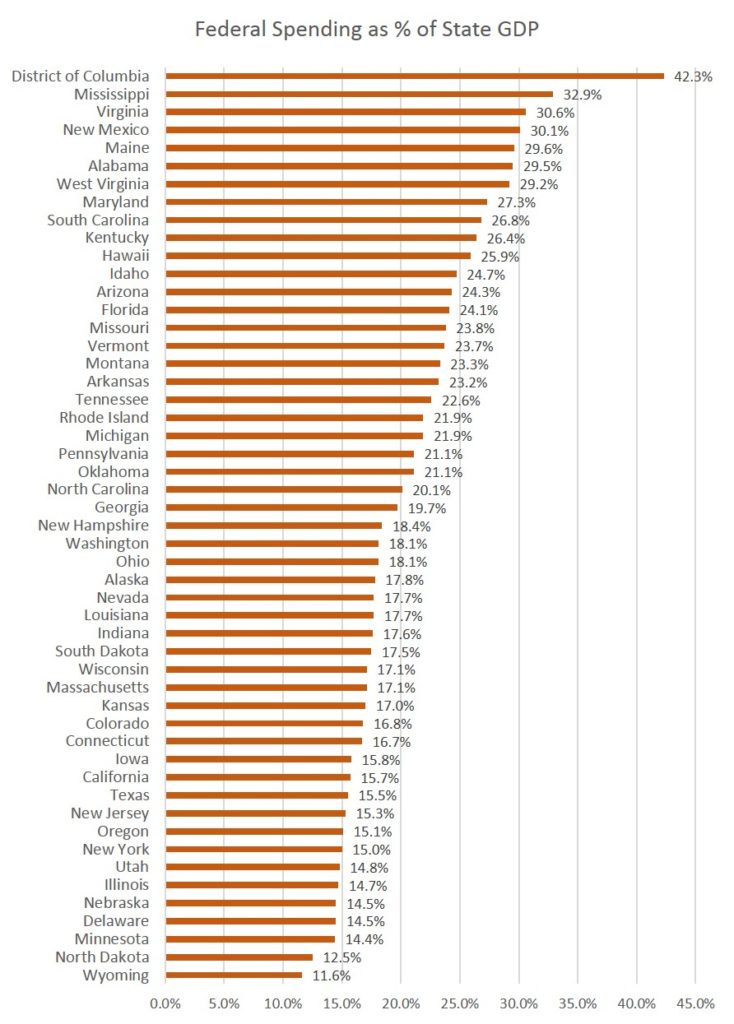 Yes and no … states that are defined as “moochers” are usually poorer states.

“While it is true that urban, coastal taxpayers are often paying more in taxes and financing government spending in other parts of the country, those same taxpayers do indeed benefit from national policy that favors the investor class (and those who work with them) over others,” noted Mises’ Ryan McMaken. “They’re paying more taxes because they have higher incomes, but these higher incomes come, to a certain extent, at the expense of Americans outside these corridors of financial power.”

And as we’ve repeatedly pointed out, tax money flowing through government to poor people doesn’t always “trickle down.”

Finally, whatever dollar amount is associated with these federal investments: What are the outcomes?  In South Carolina, it’s an all-too familiar story of failure.