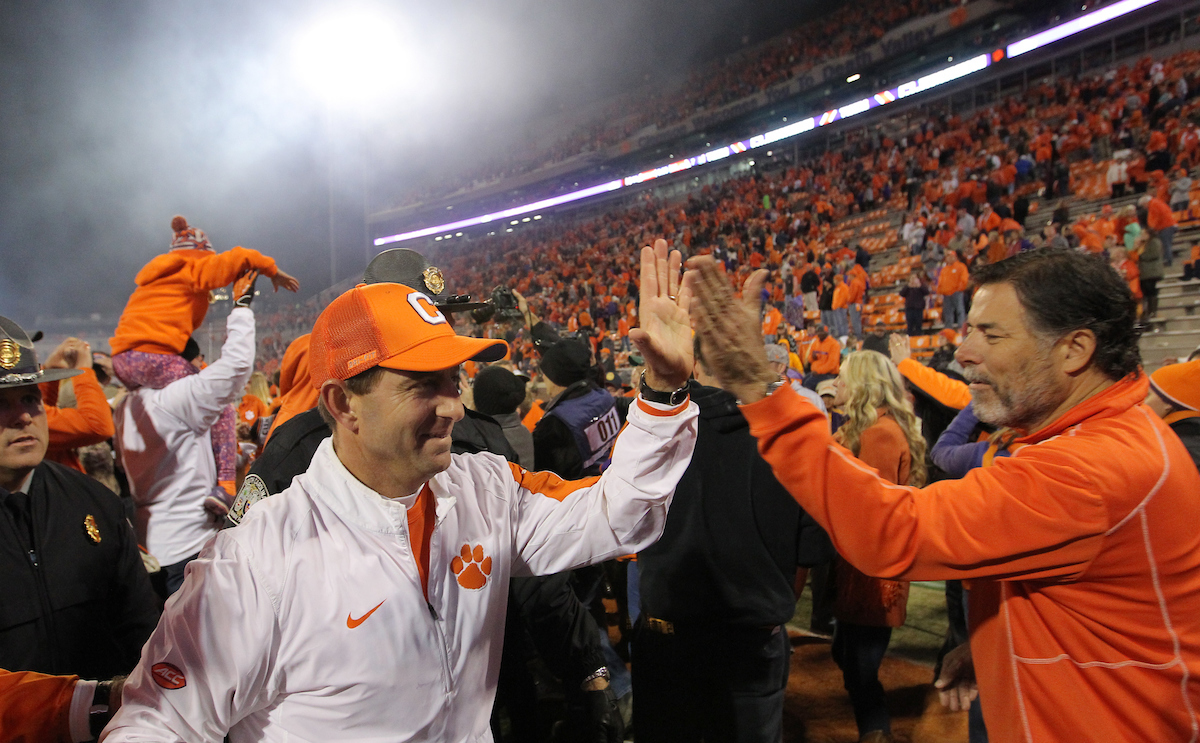 On Monday night, millions of Americans cheered as one of the greatest college championship games resulted in a last minute comeback by the Clemson Tigers.  The game is being hailed as an instant classic and many are ecstatic that the Tigers, led by coach Dabo Swinney, made it to the top of the mountain.  However, not everyone sees this as a win (and we aren’t just talking about Alabama fans).

Enter Dave Zirin, an ESPN-featured writer on the “politics of sports,” with exciting titles such as “What’s My Name, Fool? Sports and Resistance in the United States.” Although an award-winning journalist by some accounts, his recent piece, “The Unbearable Entitlement of Dabo Swinney,” touts astonishing ignorance right off the bat by labelling Clemson’s victory an “upset.”

Any serious sports writer worth a grain of salt should know that Clemson entered Raymond James Stadium through no accident (in addition to knowing that their photo captions have the name of their central figure misspelled, although Dabo IS a “Swinner”), but unfortunately Zirin’s woes don’t end there.

Zirin, a “class act” by all accounts, begins his piece with a tasteful barrage of personal insults. He bemoans Dabo as “clueless,” “filthy rich,” and “everything wrong with college football,” despite the fact that Dabo grew up in poverty.  Evoking the South’s racial history, Zirin attempts to tar and feather the 2016 Clemson and Alabama football programs by rattling off “recent events,” such as a political murder by a fanatical, racist Democrat in 1876.

Zirin is attempting to sell the narrative that Dabo, Clemson, and everyone that watches college football are undeservedly enjoying entertainment at others expense.  His tirade echoes those of Hollywood elitist Meryl Streep at the Golden Globes, when she stated “Hollywood is crawling with outsiders and foreigners. And if you kick ’em all out, you’ll have nothing to watch but football and mixed martial arts, which are not the arts.”

Dabo, a former walk-on wide receiver at Alabama, is clearly is no stranger to hard, unpaid work. On the contrary, Zirin, a man who CLEARLY doesn’t exert himself enough, believes that not paying college athletes is immoral and, on account of Clemson’s geographical location, racist.  Dabo views the idea of paying players as an entitlement mentality that he wants to discourage and rightly so.

“If anyone has expressed an obscene amount of entitlement, it’s Swinney. Here is someone working on a refurbished plantation who makes millions of dollars off the sweat and head injuries of overwhelmingly black, unpaid labor…”

A central point of Zirin’s piece is that Dabo has made a fortune on the backs of unpaid (mostly black) labor and that his refusal to entertain the idea of paying them makes him tantamount to an authoritarian, modern-day slaveholder, stating “To call the desire to end this rank exploitation ‘entitlement’ is Orwellian in the extreme. He might as well write ‘War is peace. Freedom is slavery. Ignorance is strength.’ on the locker-room walls.”

The fact of the matter is that Dabo has done more to give back to his players (and the community as a whole) than many of us will accomplish in a lifetime.  Dabo, of his own volition, recently donated $1 million to IPTAY to pay for athlete services and facilities.  Beyond fiscal means, Dabo affords his players the keys to a better life through education and personal empowerment. In 2015 the graduation rate of his football players was 83.6 percent, the second highest in the nation.  Dabo makes education a priority for his players.  Deshaun Watson graduated in three years while performing as the best quarterback in the country. Show me the self-entitled “fat cat” that would push the lynchpin of his team to pursue a goal that heavily competes with football. 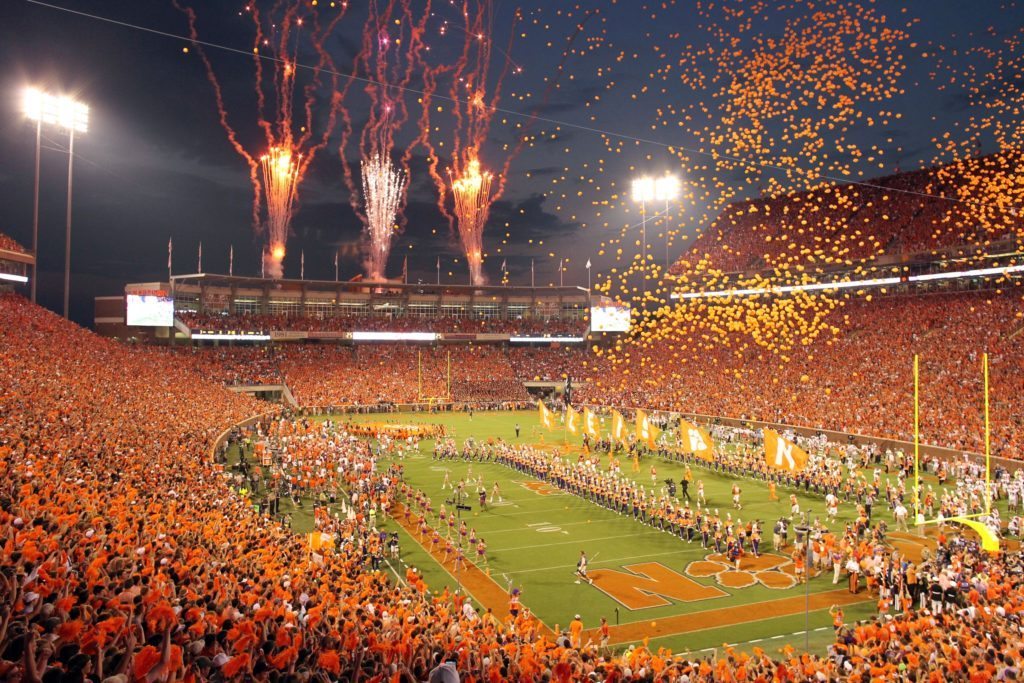 Most importantly, Dabo makes life lessons the central part of his program.  After the playoff win against Ohio State, Coach Swinney talked about the importance of his players loving one another regardless of position or status.  During his press conference after the title win, he mentioned that the memory of that night would fade, but the creed of patience, hard work, and perseverance would last his players a lifetime.

Dabo genuinely believes these ideals because he’s lived them, making Zirin’s piece all the more ludicrous.  Dabo cares for his underprivileged players more than anyone, because he was in their shoes.  Coach Swinney grew up as a poor outcast in Alabama.  It was through an unpaid football scholarship, the very thing Zirin despises, that he received an education and all of his current successes.  Dabo understands and cares for his players and to imply he’s engaging in exploitation is uninformed and insulting.

At the end of the day, Zirin feels these athletes are being objectified by everyone because they don’t have Dabo’s wealth.  In his world, the idea that players choose to enroll in college football despite knowing the risks doesn’t compute.  His understanding of the intangible value brought about through Dabo’s mentorship is also limited.  Oddly enough, Zirin seems eager to speak on behalf of the Clemson Tigers to slander Dabo, despite the fact they love and admire him.

“I winced when I heard a reporter ask you, a white man who makes somewhere in the area of $5 million a year from the physical labor and bodily risk of unpaid black athletes, if he would ‘discipline’ them for making a political statement. Given that you and I both work on the former plantation of John C. Calhoun, the historical significance of the question is staggering and troubling.” -Clemson Professor Chenjerai Kumanyika

Quoting Chenjerai Kumanyika’s Marxist rant against Dabo in September doesn’t do his argument any favors, considering he was intellectually dismembered by an Engineering student who doesn’t study politics.

It’s doubtful that Zirin expects hard-working players to take his worldview seriously. Perhaps the best question to ask Zirin, a Progressive malcontent masquerading as someone with a smidgen of passion for sport, is, “Can you name a single positive thing about college football?” It’s clear the piece is nothing more than a naked attempt to capitalize on Clemson’s historic win by evoking outrage. Perhaps next time he could put a little more time into research (and spell check) before publishing something so blatantly erroneous.

The authors of this column are students at Clemson University.  To submit your column for consideration (on this or any subject), email us here.