To say last year’s legislative drama over the lowering of the Confederate flag badly divided the S.C. House of Representatives apart would be an understatement.

The ordeal was a low point for S.C. Speaker of the House Jay Lucas – whose authority and credibility took a major hit as a result of his handling of the situation.

Lucas has rebounded … but the fiscally liberal leader from Florence, S.C. will enter the upcoming 2017-2018 session of the S.C. General Assembly with expanded, energized opposition.

And that’s before he attempts to push a gas tax increase through the chamber for the third year in a row.

Beyond that, there’s the uncertainty of a looming anti-corruption investigation that could result in the indictment of several members of the Republican caucus.

Lucas has little margin for error, in other words … but one Midlands, S.C. political operative tells us he committed a major mistake this week by intervening in a contested race for a key committee chairmanship.

As we reported earlier this week, Lucas sidestepped a fight over the leadership of the powerful House Labor Commerce and Industry (LCI) committee.  How’d he do it?  By placing S.C. Rep. Nathan Ballentine – who was challenging longtime committee chairman Bill Sandifer – on the influential ways and means committee.

That’s the panel which gets the first crack at drafting the state budget each year – making it the one committee assignment every lawmaker covets.

In our initial report this week, we referred to this committee assignment as “quite a consolation prize” for Ballentine – a longtime ally of governor Nikki Haley whose influence was set to wane given Haley’s impending departure for a position in the administration of U.S. president-elect Donald Trump.

The sixth-term lawmaker – who reportedly asked for the assignment – doesn’t think so though.  In fact we’re told he is livid at the way the committee switch went down.  According to the Midlands operative we spoke with, Ballentine had the votes he needed to win the chairmanship of LCI – prior to Lucas reshuffling the membership of that panel, anyway.

“The Speaker promised to stay out of it but he went back on his word,” the operative told us.

Lucas’ move drew comparisons to former S.C. Speaker of the House Bobby Harrell, who was known for maneuvering to protect his allies at all costs. 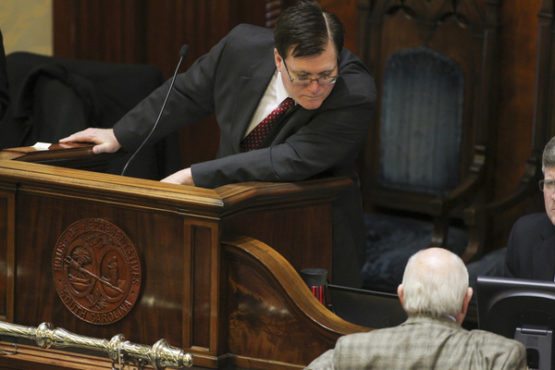 Ballentine was so angry at the alleged double cross he reportedly threatened to resign his seat over the fiasco – although there is some debate as to whether this happened before or after Lucas offered him his new committee post.

Lucas is also reportedly getting blowback from Kit Spires – the lawmaker who coveted the budget committee assignment that was ultimately awarded to Ballentine.

Like Ballentine, Spires hails from the Midlands region of the state – and believed he was entitled to this seat.

He didn’t get it, though … and now he’s unlikely to be considered for such a post for the foreseeable future.

“Lucas didn’t just screw (Spires) today, he screwed him for a long time moving forward,” the operative told us, referring to the geographical composition of the committee.

The same goes for S.C. Rep. Mac Toole, another Lexington County, S.C. lawmaker who believed he was in line for the budget seat that went to Ballentine.

Incidentally, Spires gave the speech nominating Lucas to a second full-term as Speaker of the House at this week’s organizational legislative session in Columbia, S.C.

Stay tuned … Republicans in the S.C. House were already at each other’s throats over the looming anti-corruption probe.  Our guess is these machinations won’t help calm the troubled waters.

GOP leaders in the House don’t seem worried, though.  Given the opportunity to comment on the various hurt feelings abounding within the chamber, one legislative leader declined to do so.

“It will take care of itself,” the lawmaker told us.