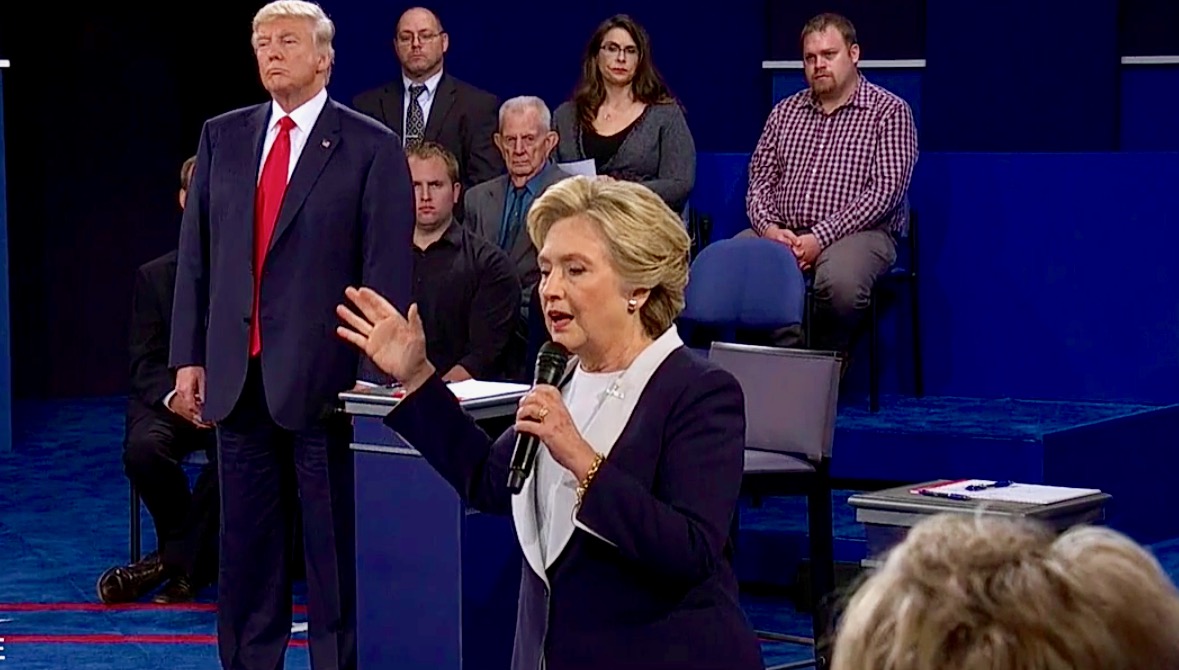 GOP NOMINEE BATTLES BACK INTO CONTENTION …

With his presidential candidacy on the brink of collapse – besieged by liberal Democrats, blasted by media elites and abandoned by establishment “Republicans” – GOP presidential nominee Donald Trump desperately needed a decisive performance in the second 2016 presidential debate in St. Louis on Sunday night.

After a rocky start, Trump managed to effectively push back against the raging controversy surrounding his 2005 lewd comments – invoking a 12-year-old rape victim whose attacker’s guilt Hillary Clinton once joked about.  Trump demanded Clinton apologize to the woman – one of several female victims of the Clintons who gathered at a press conference with the GOP nominee just ninety minutes before the debate.

Three of the women have previously alleged that Clinton’s husband, former U.S. Rep. Bill Clinton, sexually assaulted them.  Clinton even settled with one of the women – Paula Jones – for $850,000.

Once the debate pivoted back to the issues, Trump gave a much stronger performance than he did two weeks ago during the first debate – when he failed to aggressively exploit multiple openings provided by Clinton.

Rather than dwelling on the size of his bank account or obsessing over semantics like he did during his first exchange with Clinton, on this night Trump took the fight directly to her – landing several solid blows on a wide range of issues.

When the questioning turned to Clinton’s email scandal – and the subsequent cover-up – Trump dropped a major bombshell, announced that he would name a special prosecutor to investigate the affair.

“People have been – their lives have been destroyed for doing one-fifth of what you’ve done,” Trump added.  “And it’s a disgrace. And honestly, you ought to be ashamed of yourself.”

“It’s just awfully good that someone with the temperament of Donald Trump is not in charge of the law in our country,” she said.

“Because you’d be in jail,” Trump fired back.

“We want to remind the audience to please not talk out loud,” Cooper said.  “Please do not applaud. You’re just wasting time.”

Trump scored another solid punch when Clinton tried to claim that her leaked quote about politicians needing to have “both a public and a private position” on various issues was inspired by Abraham Lincoln.

“She lied. Now she is blaming the lie on the late great Abraham Lincoln. Honest Abe never lied. That’s the difference between Abraham Lincoln and you,” Trump said.

It got worse for Clinton.  On health care, the Democratic nominee fumbled badly when trying to explain her husband’s recent comments regarding U.S. president Barack Obama‘s socialized medicine law.

Hillary Clinton tried to say her husband had “clarified” what he meant by that remark.

He did … although it’s not entirely clear whether the “clarification” helped.  It certainly didn’t help Clinton, who got saddled with the onus for Obama’s imploding law when she was forced to admit that both premiums and deductibles had “gotten too high” since it was implemented. 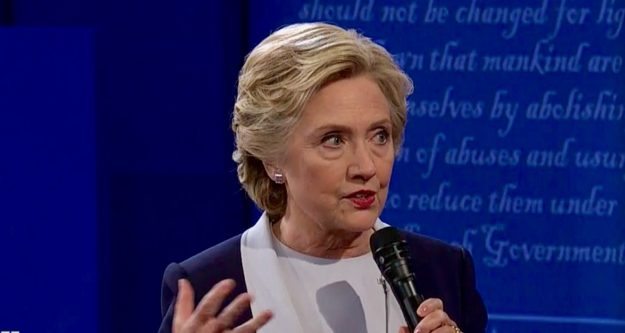 (Cap via Commission on Presidential Debates)

Trump was nowhere near as vanilla in describing the law’s failure.

“Obamacare is a total disaster,” he said, vowing to replace it with a plan that permits employers to compete across state lines to enhance competition.

Trump also landed solid, substantive blows on Clinton when the debate turned to refugees, taxes, trade and her failed prosecution of the “war on terror.”

Bookending his brutal slugfest with Clinton, though, Trump actually had a few nice things to say about his opponent – and vice versa.

At the outset of the debate, Clinton offered an exceedingly eloquent statement about how her “stronger together” campaign slogan was about bringing Americans together and creating “the future that our children and our grandchildren deserve.”

“I agree with everything she just said,” Trump said.

Also, at the end of the debate, Trump also offered up kind words for Clinton’s perseverance when a questioner in the audience challenged the two candidates to say something nice about each other.

“I will say this about Hillary, she doesn’t quit, she doesn’t give up,” Trump said, calling his rival “a fighter.”

Clinton’s compliment of Trump?  She said she respected his children.

“His children are capable and devoted, and I think that says a lot about Donald,” she said.

Will Trump’s vastly-improved performance in St. Louis succeed in stabilizing his candidacy?  That remains to be seen, but early reports seemed to point to “yes.”

“I may have made a mistake in writing off Trump,” establishment GOP pollster Frank Luntz tweeted.  “After talking with voters tonight, he’s back in this race.”