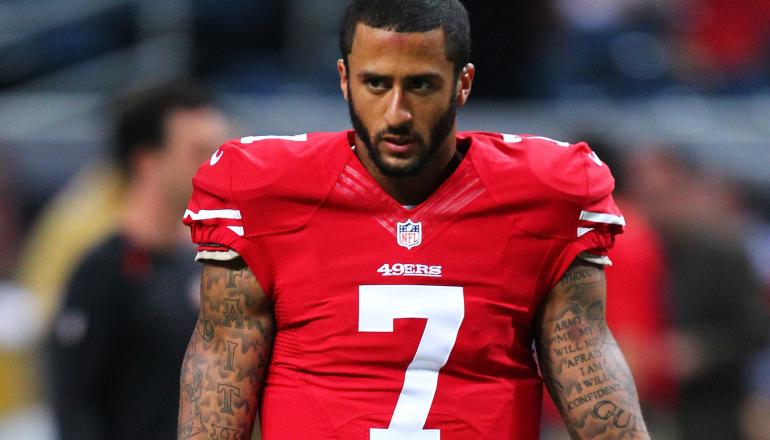 San Francisco 49ers’ quarterback Colin Kaepernick refused to stand for the playing of America’s national anthem prior to his team’s preseason loss to the Green Bay Packers on Friday evening.

The 28-year-old quarterback – entering his sixth season in the league – said his decision was a protest against discrimination against blacks in the United States.

“I am not going to stand up to show pride in a flag for a country that oppresses black people and people of color,” Kaepernick told NFL Media. “To me, this is bigger than football and it would be selfish on my part to look the other way. There are bodies in the street and people getting paid leave and getting away with murder.”

Ah … so this is a #BlackLivesMatter thing.  Or maybe just a black thing.

Either way, we don’t understand …

Kaepernick’s team issued its own statement, describing the playing of the anthem before games as an “opportunity to honor our country and reflect on the great liberties we are afforded as its citizens.”

Still, the 49ers acknowledged (as they should have) Kaepernick’s right not to acknowledge the anthem.

“In respecting such American principles as freedom of religion and freedom of expression, we recognize the right of an individual to choose and participate, or not, in our celebration of the national anthem,” the 49ers statement noted.

The NFL issued its own statement affirming Kaepernick’s right to sit out the anthem, saying “players are encouraged but not required to stand during the playing of the national anthem.”

The league’s news website also seemed to support his action, saying that by having a seat, Kaepernick took “a stand for civil rights” – and joined other athletes “in using their platform and status to raise awareness to issues affecting minorities.”

Political correctness (and hypocrisy) aside, Kaepernick should probably get used to sitting on the sidelines.  The former Nevada standout was benched by the 49ers midway through the 2015 season in favor of Blaine Gabbert.

He’s posted a 31-22 mark over his five seasons in the league, throwing for 10,030 yards and fifty-six touchdowns.  Kaepernick has seen his quarterback rating steadily drop over the last four seasons, though – from 98.3 in 2012 to an abysmal 78.5 last year.