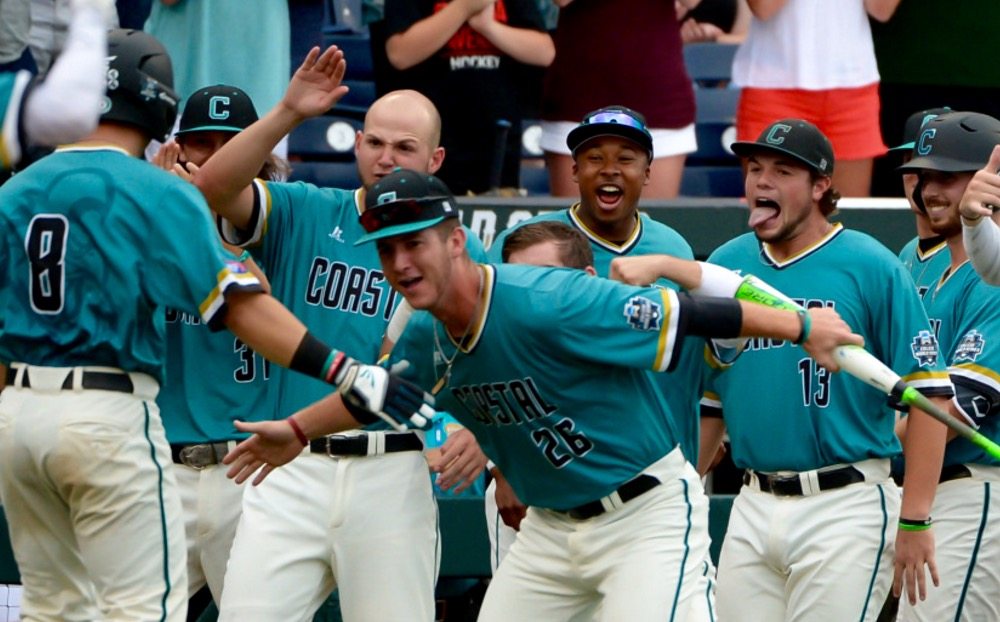 This time, its destination is the Grand Strand … specifically the Conway, S.C. campus of Coastal Carolina University.

Prior to this season, the Chanticleers (55-18) had never made it out of an NCAA super regional.  In fact they’d only advanced to the super regional round three times in program history.

Now they’re national champions – securing their improbable title with a wacky 4-3 win over the Arizona Wildcats in the deciding game of a best-of-three series at TD Ameritrade Park in Omaha, Nebraska.

With its victory, Coastal Carolina becomes the first team since Minnesota in 1956 to win the CWS in its inaugural appearance.  The Chanticleers also became the first member of the Big South Conference to win an NCAA team sport title – although they will be joining the Sun Belt Conference for the 2017 campaign.

Head coach Gary Gilmore‘s squad jumped out to a 2-0 lead in the top of the sixth inning on a bizarre play that featured two errors committed by Wildcat infielder Cody Ramer.  The very next batter – junior designated hitter G.K. Young (bio) of Conway, S.C. – swatted a two-run homer that pushed the Chanticleers’ lead to 4-0.

Thanks to Ramer’s errors, all four of the Chanticleers runs were unearned.

Young said he’d dreamed of hitting a home run in the CWS since he was a ten-year-old boy.

“I never would have thought it would come in the championship game,” he said.

Arizona had the tying run ninety feet away from home plate – and the go-ahead run at second base – when junior right hander Alex Cunningham (bio) of Duncan, S.C. struck out Wildcat catcher Ryan Haug to end the game.

Cunningham – a starter – came out of the bullpen this time to record his first collegiate save.

Junior right-handed pitcher Andrew Beckwith (bio) – who hurled a complete game seven-hitter against the top-seeded Florida Gators earlier this postseason – threw five and two-thirds innings against Arizona to pick up his NCAA-leading fifteenth victory of the season.  Beckwith also picked up CWS Most Outstanding Player honors.

As his players celebrated their hard-earned championship, Gilmore acknowledged that this year’s Chanticleer team – his twenty-first – exceeded expectations and perhaps even its own abilities.

“We’re not the most talented team in America. We’re just the national champion,” he said. “That’s all that matters.”