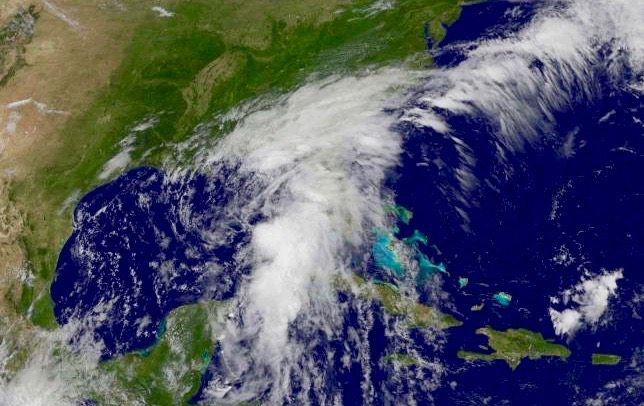 South Carolina’s coastline is squarely in the forecast track for Tropical Storm Colin – the third named system of what is shaping up to be a busy 2016 season.

As of 10:00 a.m. EDT on Monday, Colin was located about 285 miles west-southwest of Tampa, Florida. The storm was packing maximum sustained winds of 50 miles per hour and headed north-northeast at 16 miles per hour.  Tropical storm force winds extended outward 230 miles from the center of the system.

“A rapid northeastward motion is expected tonight and Tuesday,” forecasters at the National Hurricane Center in Miami, Florida predicted.

Assuming the storm sticks to script, it would cross the Florida panhandle sometime early Monday evening and begin soaking southern Georgia during the early Tuesday morning hours.  A jaunt up the Palmetto State coast line would follow on Tuesday morning/ early afternoon – at which point the system would move off of the coast and into the North Atlantic.

The bad news?  South Carolina’s coastline – soaked last week by Tropical Storm Bonnie – is in for yet another dousing.  That means we could see more of the same sort of flooding that shut down Interstate 95 a week ago.

And that road is dangerous enough as it is …

The good news?  Colin isn’t projected to get much stronger – meaning damage from high winds should be kept to a minimum.

Despite the relatively weak punch Colin its packing, Florida governor Rick Scott has declared a state of emergency for more than half of Sunshine State’s 67 counties in order to  “help state and local emergency management officials work together … to respond to any impacts of this weather event.”

The Skyway Bridge in Tampa was also temporarily closed after wind gusts of 52 miles per hour were recorded.

Stay tuned … our founding editor Will Folks is actually on the coast of South Carolina this week and will be following this system closely as it moves through his location on Pawleys Island.

UPDATE: Good News.  South Carolina looks as though it will be spared even a glancing blow from this system.