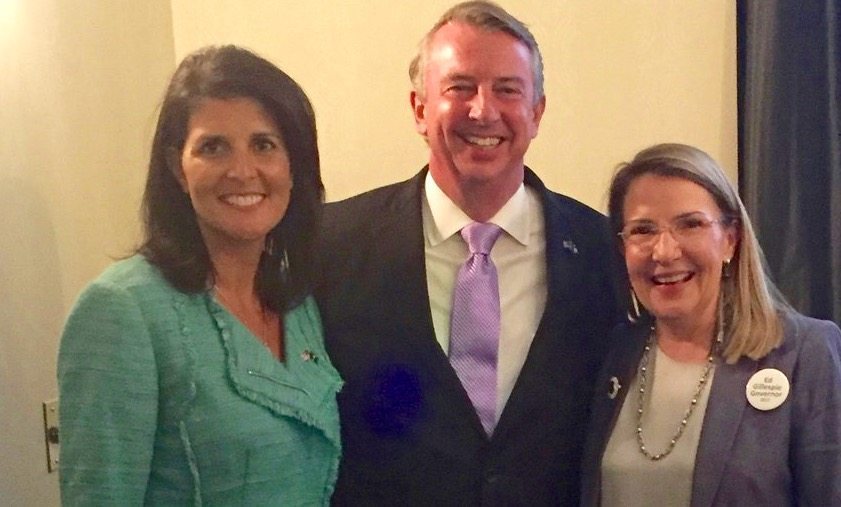 While her veto of a farm flood relief bill was getting rolled by the “Republican” S.C. House of Representatives, governor Nikki Haley was headed to Old Dominion in an effort to revive her flagging national profile.

There, the GOP establishment cheerleader was referred to as a “rising star” by reporter Jim Nolan of The Richmond Times-Dispatch.  Not only that, Nolan wrote that Haley came to Virginia to “lend her star power” to the 2017 gubernatorial campaign of former national “Republican” party chairman Ed Gillespie.

Based on the effect Haley’s “star power” had on the presidential aspirations of U.S. Senator Marco Rubio of Florida, Gillespie might be wise to say “thanks, but no thanks.”

“Our responsibility is to make sure that we continue to grow the party in a way that’s inclusive, that allows people to feel accepted and that we communicate well,” Haley told reporters after the event.  “That’s something I’m going to continue to go across this country talking about because I think it matters that much.”

Haley’s betrayal of the conservative base made her a heroine to the Washington, D.C. GOP clique (a.k.a. Gillespie’s crowd), but it has effectively ended her national ambitions.  Also she’s got her own establishment problems to deal with in the aftermath of her controversial endorsement of Rubio.

Will Haley still be a token presence at GOP events?  Sure.  But that appears to be the extent of her upward mobility.

“She’s discussed nationally for two reasons: She’s a woman, and she’s a minority,” we wrote recently of Haley.  “Beyond that, it’s abundantly clear there’s no ‘there there’ when it comes to this status quo sycophant.”