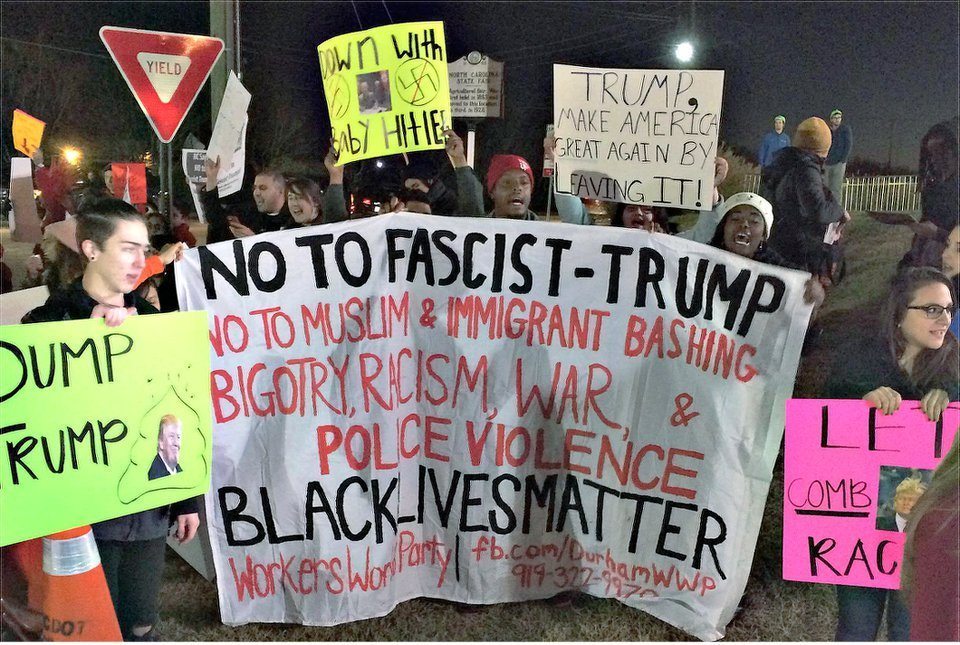 || By ROBERT ROMANO || Talk about blaming the victim.

Hard left-wing activists organize and stage protests against a Donald Trump campaign rally that was scheduled on March 11 in Chicago, Ill., with the clear intent of sparking clashes and violence, and Trump wisely cancels the event to avoid innocent people getting hurt.

Yet according to his rivals for the Republican presidential nomination, Texas Senator Ted Cruz, Florida Senator Marco Rubio and Ohio Governor John Kasich, Trump shares blame for the protests getting out of control.

Mind you, it was all staged. Organized by the likes of the George Soros-funded Moveon.org, who have already warned of more disruptions, promising to “double down.” These people are professionals.

In fact, every time there has been an incident at a Trump rally, resulting in individuals being removed by security, even those that resulted in retaliation by Trump supporters, it was in every instance initially provoked by a protestor or protestors getting out of control. Every single time. It’s a tactic we’ve already seen numerous times on the campaign trail. They look like copy-cats.

And every single time, Trump stands up to the protestors and defends his supporters, who showed up with their families to hear him speak. He reacts to them. “Get him out of here,” has become a common refrain of Trump’s as disruptive individuals are removed by security.

Well, how dare he defend his campaign against a mob? Trump tells the protestors just what he thinks of them, and so he is to blame for their disruptions, say Cruz, Rubio and Kasich.

As for Rubio, after saying Trump didn’t bear blame, “I wouldn’t say Mr. Trump is responsible for the events of tonight,” in almost the same breath Rubio couldn’t help but double backward, saying, “I think he bears some responsibility for the general tone.”

And Kasich, too, before urging protestors not to turn to violence, blamed Trump, “Tonight the seeds of division that Donald Trump has been sowing this whole campaign finally bore fruit, and it was ugly.”

In his statement, Cruz added, “I think a campaign bears responsibility for creating an environment when the candidate urges supporters to engage in physical violence, to punch people in the face. The predictable consequence of that is that it escalates, and today is unlikely to be the last such instance.”

Cruz even cited the 1968 riots at the Democrat presidential nominating convention as an example of what can go wrong, “the city of Chicago in 1968 saw some ugly days, when politics descended into hatred and incivility and even violence. It is my hope that in 2016 we can appeal to our better angels, to avoid going down that road once again.”

Well good luck with appealing to the hard left’s conscience. What a disgrace.

You see, Cruz, Rubio and Kasich are legitimizing the protestors and their disruptive tactics, and ignoring the widespread protests that have already occurred in metropolitan areas the past year organized by the hard left.

It could have just as easily been these protestors showing up at a Cruz, Rubio or Kasich rally if any of them had happened to be leading the race this year.

And now, no matter who the Republican nominee is, the nominating convention in Cleveland, Ohio could end up resembling the Democrat convention in Chicago in 1968 — only worse. Because three out of four Republican candidates for president just agreed, the GOP deserved it.

The crowds that showed up in Chicago on Friday put into context the importation of Muslim refugees, the open border policies of the Obama administration and the mass, early release of criminals from federal prisons.  When combined with the normal stupid college kids, it is a lethal cocktail that will grow now that they think they have won a victory without shouldering any of the blame.

The protestors have been justified by Cruz, Kasich and Rubio and now it is going to get much, much worse. We’ll see how they deal with it when these protestors show up at their own campaign events and start going nuts. Maybe they’ll issues statements that follow blaming themselves for creating a culture of political violence.

Ohio: For All The Marbles