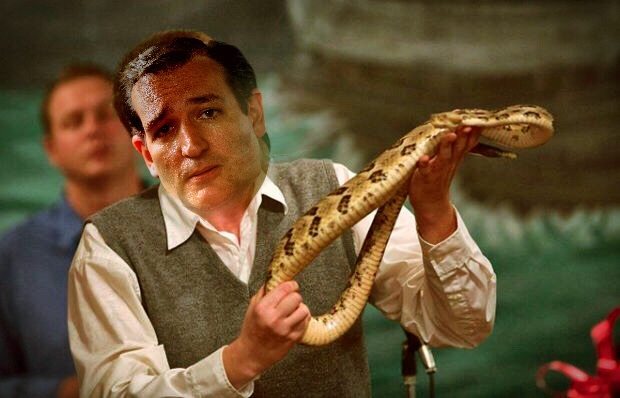 Ted Cruz … is he snake-bit?

We’ve got a big post up discussing the fallout from the 2016 “First in the South” presidential primary – in which Cruz was narrowly edged out for second place by “Republican” establishment favorite Marco Rubio.  How wafer-thin was the margin?  A mere 1,068 voters (out of nearly 750,000 cast) … or roughly one-tenth of one percent.

This minuscule margin has completely changed the national narrative … solidifying Rubio as the new favorite of the “Republican” status quo while relegating Cruz to the “loser” column in our post-election analysis.

That’s some serious spin to base on the whims of a thousand South Carolina “Republicans.”

Anyway … what happened to Cruz?

Exit polling in the Palmetto State revealed the evangelical vote Cruz was relying on did not break his way.  Many of them, in fact, supported “First in the South” winner Donald Trump.

There’s an interesting analysis from J.D. Vance of National Review calling into question the exit pollsters’ definition of “evangelical.”

“The South Carolina election results suggest that practicing Christians in the state voted differently than their peers who attend church less regularly,” Vance wrote.  “Take, for instance, one of Trump’s strongholds, the area in and around Barnwell County, near the central part of the state. Trump won nearly 43 percent of Barnwell County, while Cruz collected less than 20 percent. Unsurprisingly, church-attendance rates in Barnwell lag behind those in the rest of the state. Compare that to Greenville County, which has one of the highest rates of church attendance in the state: It was one of Trump’s worst counties. The pattern generally holds across South Carolina: Cruz does well where people regularly go to church; Trump does better where they don’t. The so-called Evangelical split is just a mirage, a consequence of a country (and a state) that mostly self-identifies as Christian but manages to largely avoid the pews.”

Vance makes allowances for the fact that Cruz still has a huge base of support awaiting him in states like Alabama, Arkansas and Oklahoma, but he adds that “it’s hard not to look at the South Carolina data and wonder whether Cruz has hung his hat on the wrong group of voters.”

“The problem isn’t that Trump and Cruz are fighting over the same group of people,” he wrote.  “The problem is that Cruz may depend on a group of religious voters who increasingly spurn church services and, consequently, traditional social conservatives like him.”

Donald Trump Is Wrong On Apple

“First In The South” Fallout