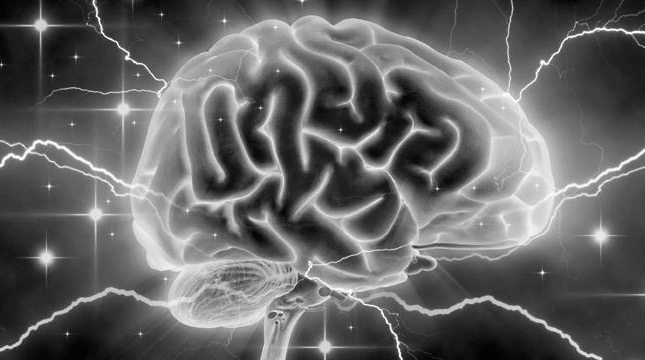 While GOP presidential frontrunner Donald Trump has ridden a wave of populist angst to his lofty position in the polls, the No. 2 candidate in the “Republican” field – U.S. Senator Ted Cruz of Texas – has been clawing his way into contention via an aggressive grassroots movement and sophisticated data collection and exploitation.

Cruz is methodically micro-targeting voters … reprising and reinventing many of the turnout techniques successfully employed by U.S. president Barack Obama during his groundbreaking 2008 bid.

The latest example?  The “Cruz Crew” mobile app … which is being promoted by the campaign digitally and as part of its door-to-door canvassing efforts.

Take a look (it’s item No. 3 on the grassroots flyer below) … 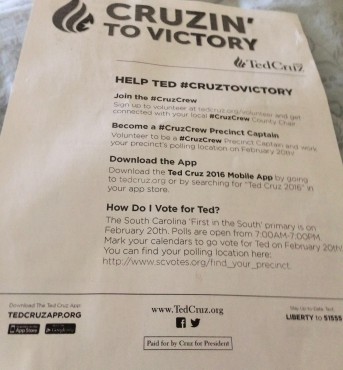 According to the Associated Press, Cruz’s app isn’t just about providing information – it’s built to take information as well.

Specifically, the app is “designed to gather detailed information from its users’ phones – tracking their physical movements and mining the names and contact information for friends who might want nothing to do with his campaign.”

Yes … and ironically, it’s the campaign of a guy who has been a leader on privacy issues.

By downloading the “Cruz Crew” app, more than 60,000 users have given Cruz’s campaign” express consent to access your contact list.”  The app also tracks the location of the smartphone “so that we can connect you to other Cruz Crew users based on your particular geographic location.”

Um … that’s kind of creepy.  Creepier still?  Cruz’s campaign is sharing the information it gathers from your phone with other organizations – and with analytics companies.

And technically, his campaign is not doing anything wrong … as users who don’t want their contacts scoured or their physical locations tracked can opt-out of those features on the “Cruz Crew” app.

Still, there’s something more than a little bit unsettling about these sorts of tactics … to say nothing of the sort of people who would be willing to turn that kind of information over.

Didn’t Jerry Falwell, shortly before his great departure, tell the world that the Antichrist was likely already among us?

I think he did but that wouldn’t be Cruz. The Antichrist starts out as a nice guy, you know like Sanders. ;)

One of the reporters I followed on twitter during the Iowa caucus – tweeted that his uber driver said he was voting for Trump but was worried he was the antichrist.

I don’t thin most uber driver were valedictorians.

There’s a reason why religion was illegal in the communist Soviet Union. To believe in something that could fulfill you that wasn’t the State was a direct challenge to government’s authority to run your life. It’s ironic that Bernie’s attempt to win points by likening himself to a man of faith actually reminds us that Bernie’s goal of revolution requires the eradication of religion.

Did you listen to Rush today? This sounds similar to what I heard him talking about. I didn’t catch all of it as I was just listening in my car while running an errand.

You do realize Russia is big time Christian right?

Pogo is the actual anti Christ.

Ted Cruz has an App.
There are also Apps that strickly make fart noises.

At least fart apps are worth downloading.

Better than the sounds that actually come out of his mouth on an average day. LMAO!!!

Neither his mom nor children can stand him. Google videos of it…

They are saying that when he was born he looked like a mush melon — but then they turned him right side up.

He was so ugly when he was born (in Canada) they named him ‘Shit happens’……..later changing it to Ted Cruz.

He is so ugly they have to put a paper bag over his head before the dog humps his leg……..

Is it true that his father wanted to name him Theophilus when he was born? Because he was the awfulest thing he’d ever seen?

Why all this bother? Why doesn’t God just give him all this stuff? HE knows all.

Or scrape up a single advertiser.

Rocky and I are trying to help.

We know pogo, but you already ran a blog into nothingness.

He is still pretending to be that Fannin guy. It’s kind of cute how stupid he is. He’s downloading all kinds of liberal pictures and cheering on Bernie just to imitate me. Played like a violin! LMAO!!!!!!

Damn.Just got called in from Fits HQ and it has ruined my night! Just got a new transgender,gay,straight boy/girl friend and we was eating paint chips for dinner.

Glad your enjoying my company, big boy. I was hoping you’d feed me more than paint chips, but I understand you being tight with your EBT, now that having a job will be a requirement. Now, back to tossing my salad…

Explains why you are dumbly copying me!

Na.You can be eating dinner at the Pow Wow in Tucumcari,NM and they can find ya?

Was that David Fry kid your nephew?

Reading the article all of them except Donald and Hillary have apps – Cruz’s goes a little farther than the others with giving the info the data analytical company.

Ted Cruz wife says he is the chosen one!

After movingbto Texas, Ted Cruz’s wife was found by police next to a highway acting erratic and had to be put in a mental hospital, so I bet she thinks all kinds of crazy things.

Married to Ted has to be rough…

LMAO!!! At least Bill and Hillary didn’t leave Vince Foster on the highway.

No children around, pogo?

Sounds like Cruz will be all about the NSA!

So? I’m all about the NAMBLA.

If you say so!

Fits don’t hold that against me.

Pogo admitting he is employed by FITS and is a member of NAMBLA? Oh my! Screen shot!

If the “Cruz Crew” mobile app flashes up the “queen of diamonds,” you are in some deep shit.

“Let’s pass the time by playing a little solitare”………
Got the DVD in my library……….(right beside “Soylent Green”, “Panic in the Year Zero”, The Fire Next Time” , “Testament”, On The Beach”, “The Day After”, “Invasion USA” and that masterpiece of films: “Threads”{just don’t watch that if you’re suicidal….}.)

Mrs. Cruz is intimately involved with Goldman Sachs, as is Clinton — makes me wonder who is trying to buy this election — too much intrigue and influence for me — Cruz should resign from the senate before running because I don’t trust any politician who is not willing to put his faith in running at 100% …..

I’ve been blocked by this cyber-attack and cannot enter Fitsnews except by responding to a comment — thanks. I’ll try to contact Fits and see if he can do anything from this end. If not, then I’ll try some other way…. so I can’t read or respond to any articles or comment for the time being. I can’t even read the articles — DAMN..!!

you have Choice on the app, you don’t have to let them have any of the information. GOP needs smart tech savvy candidates/organization.

Read somewhere last night one of the Koch brothers front groups has made a $1.5 million buy of anti-Cruz ads.