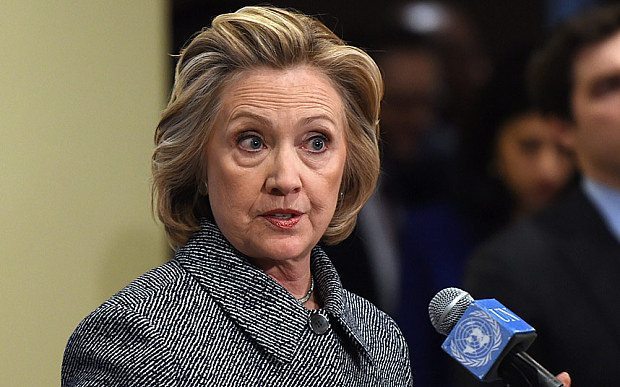 OKAY … TURN YOURSELF IN!

Hillary Clinton – who should probably be looking at the inside of a jail cell right now – told CNN this week she wants Americans to “hold her accountable.”

Really?  That’s a pretty funny comment coming from a woman who conducted all sorts of taxpayer business (including top secret taxpayer business) on her private email server.  Last week, The New York Times reported that twenty-two emails recovered from Clinton’s server would not be released publicly by the U.S. State Department because they contained classified information.

This marked the first time the federal government has acknowledged that Clinton – who ran the agency from 2009-13 – handled “top secret” material on her private server.

Oh, in addition to those 22 emails – the State Department announced that eighteen emails exchanged between Clinton and U.S. president Barack Obama would not be released, either.

But yeah … let’s “hold her accountable.”

“This is very much like Benghazi,” Clinton told ABC News. “Republicans are going to continue to use it, beat up on me. I understand that.  That’s the way they are.”

“This was all planned in advance,” he said, arguing that Clinton’s private email server represented “a change in the standard” used by previous secretaries.

“This eliminates claims by the State Department that they were unaware of her private email server until later,” Krongard told the paper. “How else was she supposed to do business without email?”

But again … let’s “hold her accountable.”

We’ve always felt the real scandal associated with Clinton’s email server wasn’t necessarily the lack of transparency – intentional or otherwise – but rather the corporate cronyism and pay-to-play warmongering (which appear to be the focus of another botched coverup).

Either way … her claiming that she wishes to be “held accountable” is laughable.

Despite the scandal, Clinton is expected to win a narrower-than-expected victory over independent socialist U.S. Senator Bernie Sanders in early-voting Iowa this week, although polls in early-voting New Hampshire show Sanders is likely to win in the Granite State.