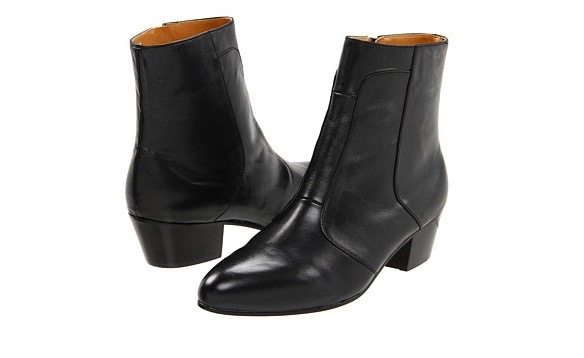 For example, we would never vote for U.S. Senator Marco Rubio of Florida because he hates individual liberty – and because cast the deciding vote in the U.S. Senate on behalf of president Barack Obama‘s crony capitalist trade deal.

Oh, and there’s that pesky immigration issue GOP voters are pretty keyed in on this election cycle …

Beyond that, he’s pretty pathetic when it comes to managing money … and may or may not have some major personal issues lurking in his background.

To that list we must now add … “men’s high-heeled booties.”

Where is this being covered?

“The boots – which we think are either these Giorgio Brutini boots or these Margiela ones – look a lot like a pair favored by Styles, albeit with slightly less pilgrim flair,” blogger Jessica Roy wrote for New York Magazine‘s “The Cut,” a women’s blog.

“All he needs now is a Vespa and a man purse,” one national operative told us.

Oh well, guess we shouldn’t be surprised at Rubio’s “booties.”

He is European … (at least in his work hours).

Trey Gowdy … Back When He Didn’t Endorse Candidates