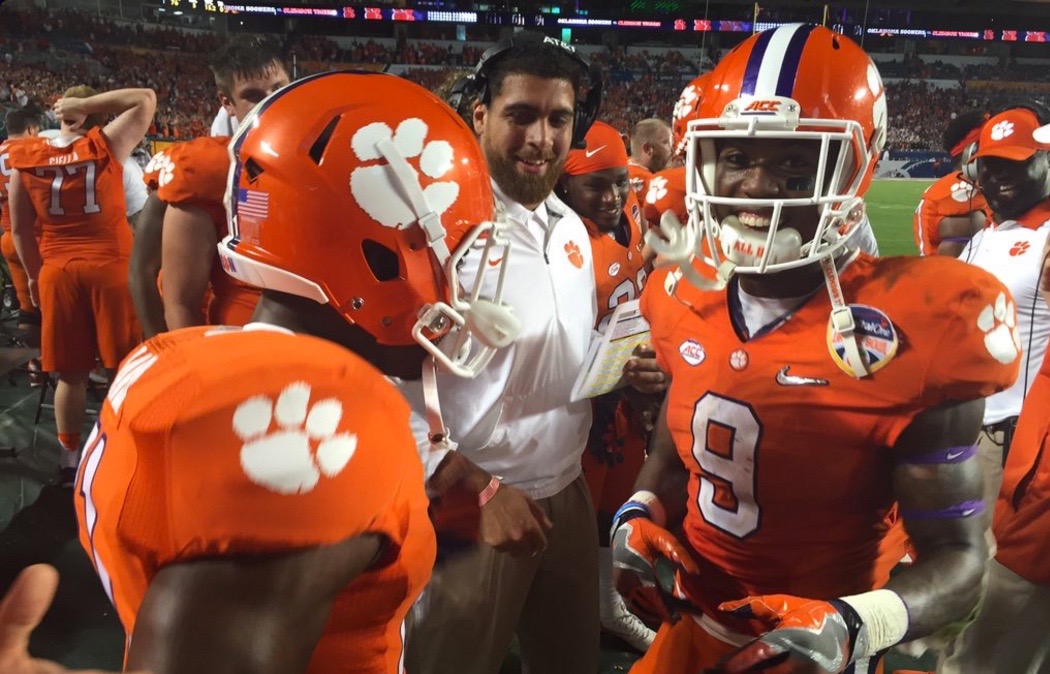 Now head coach Dabo Swinney‘s team is one game away from the school’s first national title in nearly three-and-a-half decades.

As he has all season, Heisman Trophy finalist Deshaun Watson led the Tiger offense – completing 16 of 31 passes for 187 yards with one touchdown and one interception.  The sophomore signal-caller also ran for 145 yards on 24 carries with another touchdown – making this the ninth game of the season in which Watson has scored on the ground and through the air.

Once Clemson (14-0, 8-0 ACC) got the lead in the second half, it turned to the “Wayne Train” to complete its journey to the championship game.  Sophomore running back Wayne Gallman – held in check for most of the first half – erupted during the second half en route to a 26-carry, 150-yard, two touchdown performance.

Clemson’s 312 rushing yards were a bowl record for the school – but even more impressive was the job Clemson’s defense did against Oklahoma’s vaunted running game.  The Sooners (11-2, 8-1 Big XII) were held to just 67 yards on the ground – with NCAA single-game rushing record-holder Samaje Perine limited to just 58 yards on 15 carries.

Coming into the game, Oklahoma was averaging 235 yards per game on the ground.

Sooners’ junior quarterback Baker Mayfield made his share of plays, but a pair of costly interceptions – including one in the final seven minutes of the game – doomed any shot Oklahoma had at staging a last-second comeback.  Mayfield finished the game 26-of-41 for 311 yards, one scoring strike and the aforementioned two picks.

Prior to encountering coordinator Brent Venables‘ unit, the Sooners had been averaging more than fifty points a game over their last seven contests.  Oklahoma actually led 17-16 at the half, but Clemson pitched a second half shutout to seal the deal.

Making Clemson’s second half defensive stand even more impressive?  The Tigers did it without star defensive end Shaq Lawson – who left the game in the first quarter with a knee injury.  Lawson led the Tigers in 2015 with 9.5 sacks and 22.5 tackles for loss on the season.

Clemson will play the No. 2 Alabama Crimson Tide (13-1, 7-1 SEC) in Glendale, Arizona on January 11 for the 2015 national title.  Alabama won national championships in 2009, 2011 and 2012 – and qualified for the inaugural four-team playoff a year ago (losing to eventual national champion Ohio State).

Clemson won the national championship in 1981 with a 22-15 victory over Nebraska in the Orange Bowl.  That team, led by head coach Danny Ford, finished the season 12-0.