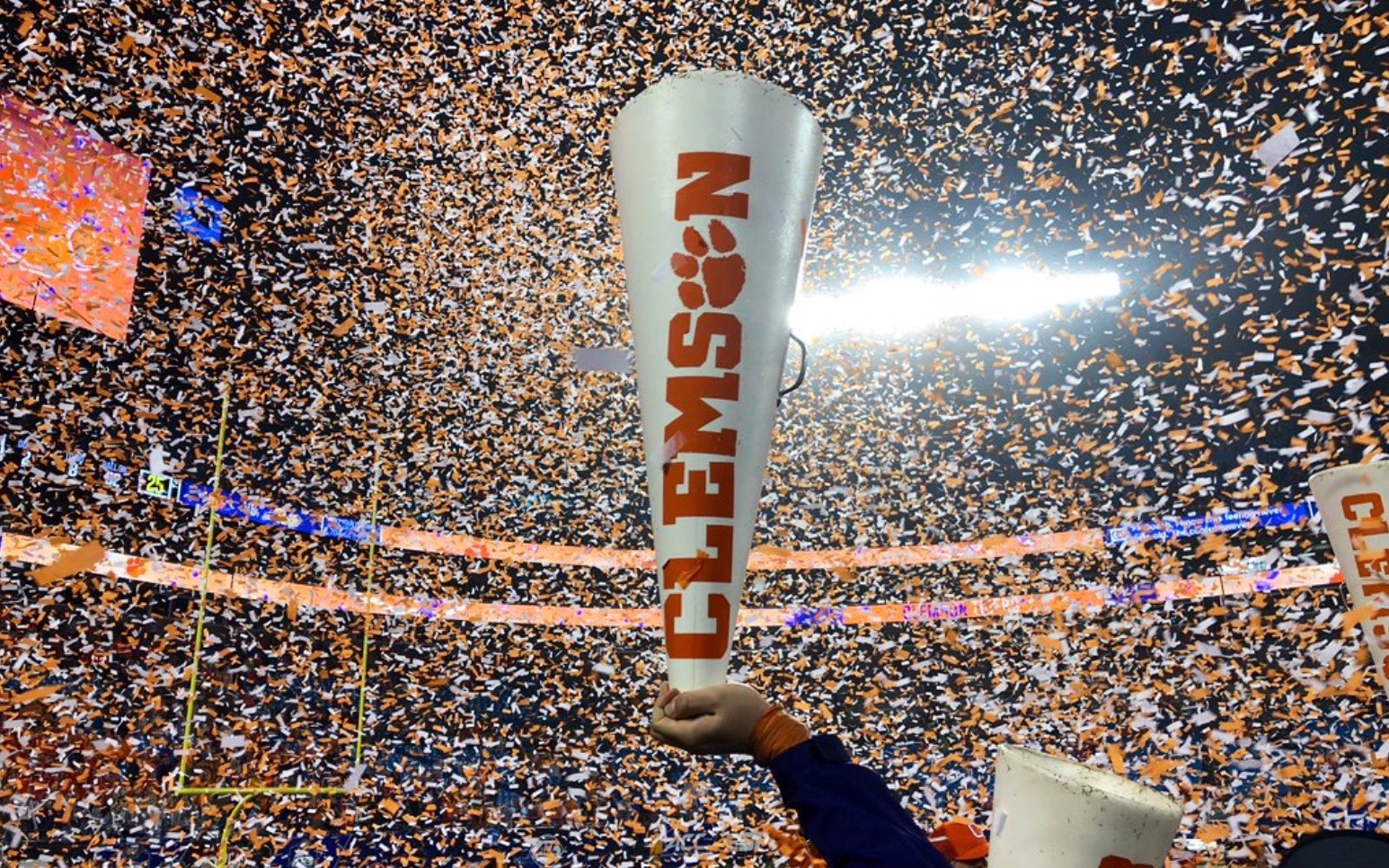 Hell, a few of the players’ parents probably hadn’t been born …

Nonetheless, “takin’ care of business” is exactly what these Tigers continue to do … mixing brutal efficiency on the field with an infectious glee in their dance-happy locker room after they win.

And winning is fun … well, usually.

A week after their head coach chided fans (and some in the media) for being “unsatisfied” with Clemson’s historic gridiron exploits over the past few years, the second-ranked Tigers (13-0, 8-0 ACC) demolished ACC coastal champion Pittsburgh to capture their fourth consecutive conference championship (a record in the divisional era).

After letting the Panthers (7-6, 6-2 ACC) hang around for the better part of the first half, Clemson scored a pair of touchdowns in the final five minutes of the opening stanza to take firm control of the game – and their playoff destiny.  Both scores came on passes from true freshman phenom Trevor Lawrence to sophomore sensation Tee Higgins – with the second set up by a 31-yard interception from all-ACC defensive back A.J. Terrell.

After going great guns a week ago in the Tigers’ rivalry win over South Carolina, the second team all-conference signal caller was limited to only 12 of 24 completions for 118 yards and the aforementioned two scoring passes.  Still, Lawrence moved to 9-0 since taking over as Clemson’s starting quarterback in late September – an announcement that led to the transfer of graduate senior Kelly Bryant. 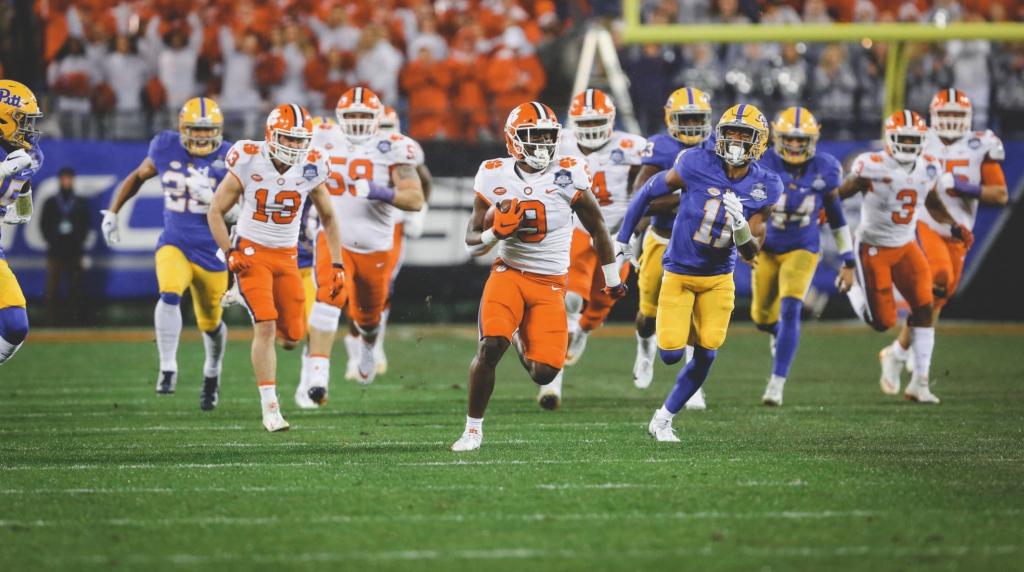 Lawrence didn’t have to light it up on a rainy night in Charlotte, N.C., though.  Especially not with sophomore tailback Travis Etienne – the 2018 ACC player of the year – gashing the Panthers’ defense for 156 yards on twelve carries and a pair of scores on the ground.  The 5-foot-10, 200-pound native of Jennings, Louisiana now has 1,463 yards and 21 touchdowns on the season – numbers which are even more amazing when you consider the number of carries Clemson gives its backup tailbacks Adam Choice , Tavien Feaster and Lyn-J Dixon.

The best news of the night for Tiger fans?  The return of their dominant defense – which was badly exposed last week against arch-rival South Carolina.  After giving up 600 yards to the Gamecocks – 510 of them through the air – the Tigers clamped down against the one-dimensional Pittsburgh offense, limiting head coach Pat Narduzzi’s team to just 200 total yards (and only eight yards passing). 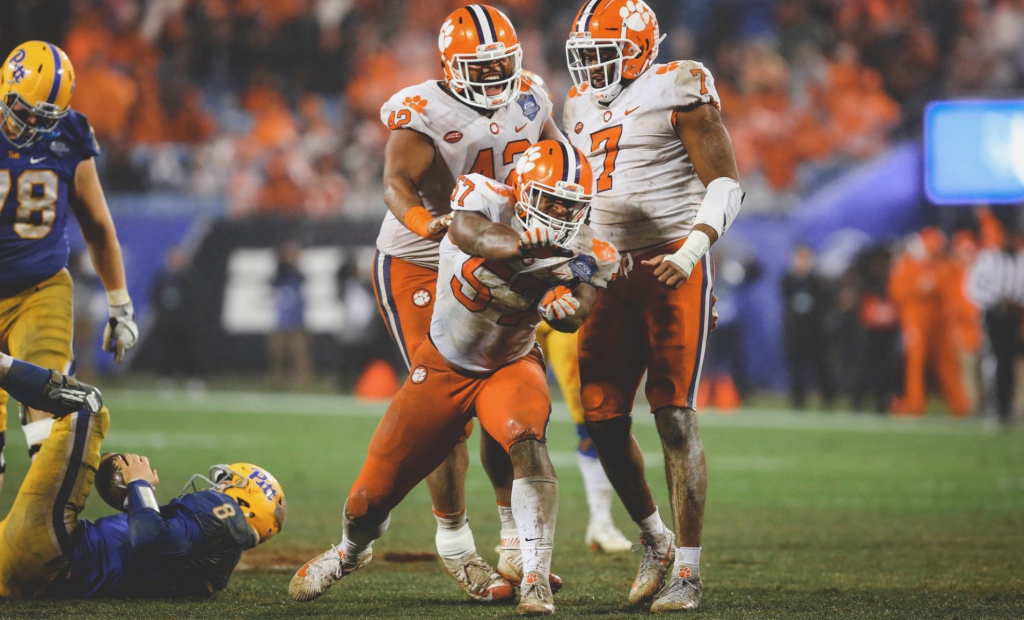 Junior linebacker Tre Lamar (above) – used to playing in the shadow of the Tigers’ dominant defensive line – had one of his best games of the season against Pitt.  The 6-foot-4, 255-pound Roswell, Georgia native recorded a team-leading nine tackles – including a sack and two tackles for loss.

The Panthers – the latest in a long line of teams to be manhandled by Clemson – were impressed.

“Clemson is the best football team we have faced this season and they will probably win a national championship in my opinion,” Narduzzi said. “That’s a good football team from the front end to the back end.”

Narduzzi’s statement bears particular consideration in light of the fact his team nearly upset No. 3 Notre Dame in South Bend, Illinois in mid-October.  The Panthers led the Irish late in the fourth quarter in that closely contested match-up.

Like the Irish, Clemson will await the reveal of the final College Football Playoff (CFP) standings on Sunday.  All signs point to the Tigers earning a No. 2 seed in the four-team field, their fourth consecutive playoff appearance.

College Football Playoff: Clemson Is “In”