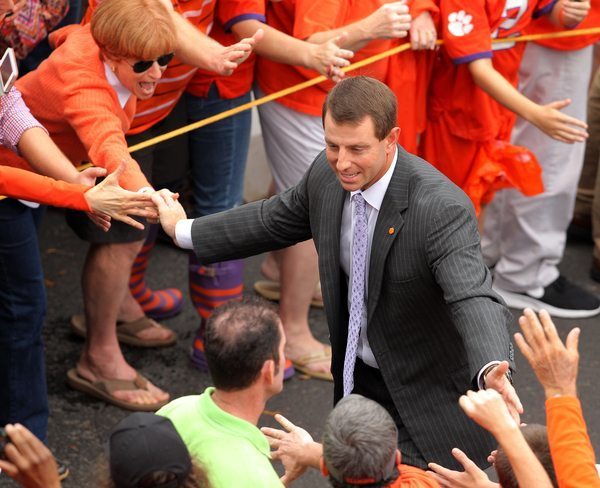 He’s been mocked … embroiled in controversy.  There’s even been a Twitter hashtag devoted to his various #DaboSwinneyProblems.

Well guess what: He’s now the national Coach of the Year.

Clemson University’s Dabo Swinney – in his sixth full season in Tigertown – has won the 2015 Home Depot Coach of the Year Award.  He’ll pick up his hardware during a nationally televised awards ceremony on Thursday evening.

Swinney’s Tigers (13-0, 8-0 ACC) defeated three Top 25 teams in the Associated Press poll this year (No. 6 Notre Dame, No. 17 Florida State and No. 8 North Carolina) and earned six consecutive No. 1 rankings from the College Football Playoff.  As of this writing his squad has won sixteen straight games – the longest active streak in college football – en route to capturing its first ACC championship in five years.

Since taking over for Tommy Bowden in the middle of the 2008 season, Swinney has posted a 72-26 record as Clemson’s head coach – including five consecutive seasons with at least ten victories.

The Tigers will put their winning streak and undefeated record on the line New Year’s Eve in the Orange Bowl against No. 4 Oklahoma – a team they shredded 40-6 in the 2014 Russell Athletic Bowl.  The winner of that game will play the winner of the Cotton Bowl – which pits No. 2 Alabama versus No. 3 Michigan State – for the 2015 national championship.

Will Muschamp Staffs Up