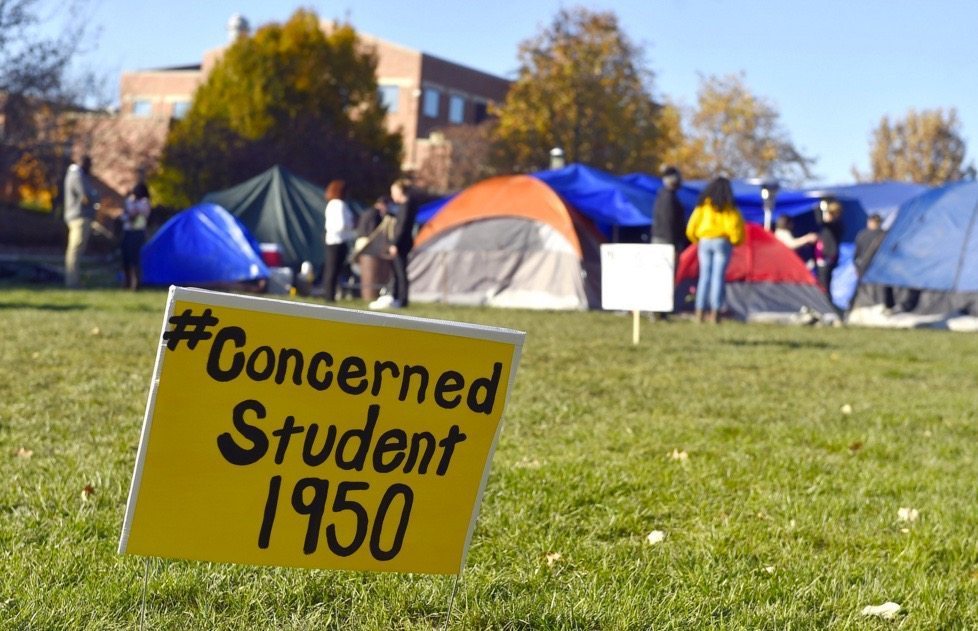 The president of the University of Missouri resigned this week amid allegations that he failed to sufficiently address racial issues on the school’s mostly white campus.  Of interest?  School president Timothy Wolfe made the decision to step down after members of the mostly-black Missouri football team said they would not practice or play in a game until a student opposing Wolfe ended his hunger strike.

A national championship contender in recent seasons, Missouri has struggled to a 4-5 record this year.  Which is probably one reason so many of its players were willing to put their season on the line.

“We will no longer participate in any football related activities until President Tim Wolfe resigns or is removed due to his negligence toward marginalized students’ experiences,” Mizzou strong safety Anthony Sherrils said.

What the hell happened here?

Well, back in October someone apparently drew a swastika on the wall of a gender-neutral dorm on campus … using human feces.

That display prompted 25-year-old Jonathan Butler – a black graduate student at the school – to launch a hunger strike.  According to Butler, he was willing to die for his cause – namely opposing the “systematic oppression” of Mizzou’s minority students.

“I already feel like campus is an unlivable space, so it’s worth sacrificing something of this grave amount, because I’m already not wanted here,” he told The Washington Post.  “I’m already not treated like I’m a human.”

Does that sound like a hotbed of “systematic” intolerance to you?

Of course not … but according to Butler, the hatred spawned by the 2014 Ferguson race riots somehow infected the Columbia campus.  And when several isolated incidents of bigotry culminated in a sh*t-stained swastika – the politically correct drumbeat was on.  And once the football team got involved … heads were gonna roll.

“It’s a commentary on the influence of football in the SEC,” one Mizzou alum told FITS.  “It’s like (Wolfe’s) hands became tied and he had no other choice.  He was backed into a corner.”

According to the alum, “there is no evidence of any systemic policies at Mizzou that would oppress African-Americans – but they’ve ruined the president over it.”

The PC legions are unlikely to stop there, either.

“There’s a statue of Thomas Jefferson on campus,” the alum added.  “It’s symbolic of Missouri being part of the land in the Louisiana purchase – which was made during his presidency.  But now some students want the statue (taken) down because he was a slaveholder.  Ridiculous. PC on crack!”

In fact this whole sorry episode only solidifies our theory regarding college athletics: That these government-run institutions and programs should be forever severed from the public sector, set free to pursue their destinies in the private sector.

Don’t get us wrong: Racism is abhorrent.  And those who practice it should be held accountable for their actions.  And Missouri’s president obviously did an extremely poor job of communicating with students and working to have a dialogue with them about their concerns – which, albeit exaggerated, deserved to be heard.

“A student accused the president of systematic oppression of black students on campus,” one public relations professional told us.  “He responded by saying people need to realize that their success is a result of their own actions and their own responsibility.  It made him seem cold, but I don’t disagree with him.”

Nor do we … in fact individual responsibility is what made this country what it is.  Or was.

What went down at Missouri this week was a politically correct lynching … a triumph of irrational outrage.

More than that, though, it was a win for the very sort of unfounded bullying the protesters claim to have been fighting against …

Ron Paul: “Does The Bell Toll For The Fed?”