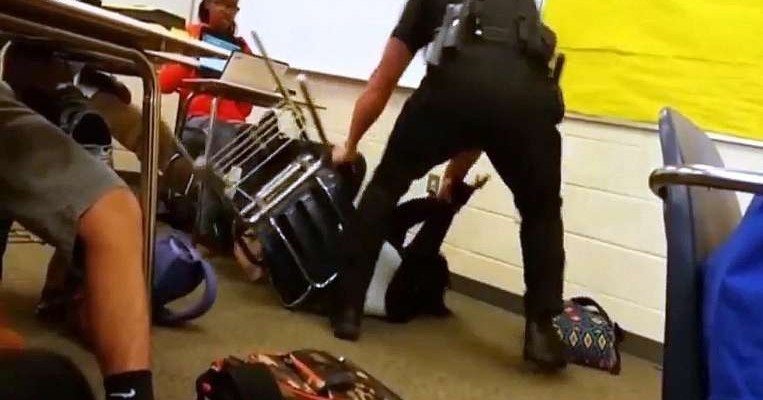 COPS IN GOVERNMENT-RUN SCHOOLS UNDER THE MICROSCOPE

The firing of Richland County, S.C. deputy Ben Fields in the aftermath of his violent arrest of an unruly female high school student was no surprise.  Anyone who watched the video clip of the arrest – or soaked up the ensuing national outrage – knew exactly what was coming.  And for the record, we think it was the right decision.

Whatever disrespect or “resistance” Fields was shown by the student in no way warranted the reaction we all saw on tape … even if some of the students who taped the takedown felt it was justified.

Seriously: Imagine that was your daughter getting manhandled like that?

Having said that, there are some valid arguments being made in opposition to Fields’ termination.

The most compelling one?  That it will place other law enforcement officers at risk.

Let’s make something clear up front: We think it’s beyond depressing that South Carolina’s failed government-run schools have become so unsafe that sheriff’s deputies have to be dispatched to patrol them.

It’s embarrassing … and more to the point, it places the public at risk as these officers should be on the streets protecting life and property, not babysitting high school kids.

But if hundreds of Palmetto lawmen are going to be diverted from their core public safety obligations to address the increasingly out-of-control failure factories our state government refers to as “schools,” shouldn’t their safety be an issue as well?

And doesn’t Fields’ termination potentially create a situation in which other misplaced law enforcement assets could find themselves under siege – even targeted – with no recourse for defending themselves?

Again, we’re not about to make excuses for Fields’ conduct.  He got what he deserved. But that doesn’t change the fact our government-run schools have become war zones – creating fresh taxpayer obligations on top of the billions of dollars already shelled out annually on the nation’s worse government-run school system.

As we’ve said all along, we believe in putting the free market in charge of education.  We believe instruction, testing and accountability, transportation and yes, security obligations would be far more efficiently discharged by a system in which parents had choices.

And if “security” was mishandled – as it clearly was in Fields’ case – the market would take care of that.

What do you think?  Vote in our poll and post your thoughts in our comment section below …