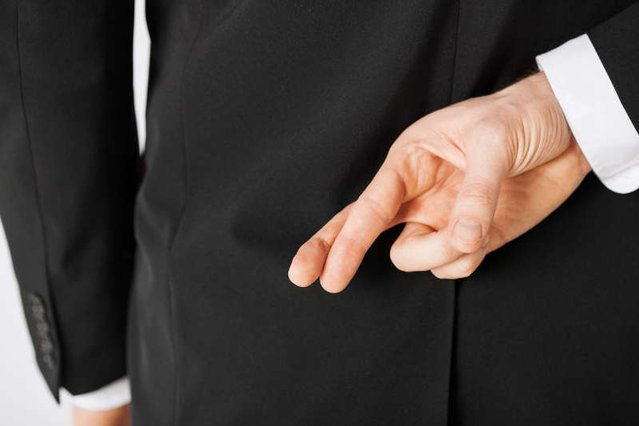 This, of course, is the agreement by which a “Republican” candidate agrees to support the party’s eventual presidential nominee – whomever it may be – and vows to forsake a third party campaign.

We opposed Trump’s decision (arguing “Republicans” haven’t done anything to deserve anyone’s loyalty), but it was clear multiple states – including South Carolina – were going to block Trump from appearing on the primary ballot in the event he didn’t sign the oath.

Fast forward to this week, when one of the left-leaning establishment “Republicans” running for president (without success, we’d like to point out) made clear he wasn’t going to follow the oath.

In an appearance on Newsmax TV, former New York governor George Pataki said he would not support Trump’s presidential bid should the latter win the nomination – even though he signed a loyalty oath pledging to do just that.

“Let me be very plain, I’m not going to vote for Donald Trump – because he has no chance of being the Republican nominee,” Pataki said. “He is unfit to be president.”

“He would hurt our party and I would think and hope that virtually every one of my fellow candidates seeking the nomination would be willing to stand up and say ‘Our party cannot nominate Donald Trump,'” Pataki added.

Pataki is one of the GOP also-rans who has tried to make a name for himself attacking Trump.  How’s that strategy working?  Well, former Texas governor Rick Perry – one of the first to employ it – became the first “Republican” candidate to drop out of the race last week.

Pataki?  He’s so far behind in the polls Real Clear Politics doesn’t even register him as a blip on the radar anymore in its composite of the GOP race.

We’ve written previously on how establishment efforts to kill “The Donald” have only made him stronger – and hurt those firing the shots.  But Pataki’s latest line of attack – a.k.a. “I hate Trump so much I won’t honor the GOP loyalty oath if he wins” – has the potential to backfire on the party on a much bigger level.

Well, if the GOP insists on loyalty from Trump – but looks the other way when establishment “Republicans” refuse to reciprocate – then the party’s loyalty oath is every bit as worthless as a Grover Norquist tax pledge.

Meaning Trump doesn’t have to abide by it either …

Who in their right mind thinks Trump IS fit to be president? Seriously. You have to be insane to think that he is.

He is more qualified than any of the Dims.

How? They all have extensive experience as elected officials and know about foreign policy. Trump isn’t a very successful businessman (he inherited a fortune and declared bankrupt multiple times) and thinks attending a prep school have him more military training that actual boot camp. He’s a buffoon who’s not to be taken seriously be any adult with an ounce of integrity.

The’closet’ Muslim American hating radical Islamist loving lawless dictator currently occupying the wH lowered the bar so much that Amrican’s are just looking for a President that just doesn’t believe America is evil and hates 50% of the country.

When Obama tells Americans we are all racists and bigots because we disagree with him, ALL of us believe he means it. When Trump tells Americans he loves this country and American greatness the people ALL believe him.

Just that simple.Obama wore us out as a nation and destroyed the Democrat Party.ANY republican would win in this cycle of politics.

See what I mean?
Only insane people think Trump is Fit for office.
(Thanks for helping me make my point, flip. Good on ya!)

Q: How do you keep a Liberal busy all day?
A: Put him in a round room and tell him to wait in the corner.

Definition of how I ‘play’ you all day!

I dun get it – i was ed’cated in South Carolina.

Flip’s first boss told hime to go get a bucket of steam, and he’s still trying

How do you keep flip busy all day?

Ask the DNC, he’s working very hard all day here at FitsNews for them.

We covered this last night. Nobody gives a fuck!

Last night. On yeah, I forget you live here.

No he lives at home. We pay money so he can do that. He sits around on the Computer all day sucking down his government benefits.

He has nowhere else to go. No one else will take him. The smelly hobos have to go somewhere.

Poot Hockey calling anyone unfit to be anything is really cool.

Trump represents the anger of the white middle class.Politicians spend no time helping them. Black lives matter more and illegal immigrants who break the law get a free pass. Evangelicals in this country no longer feel they have the right to religious freedom and have watched what they perceive as a sacred institution in marriage gutted. All the while, politicians they voted for to represent them just plain don’t.

How true it is sir. You describe the rise of Trump perfectly. There is a lot of anger in the white middle class. We’re not against hand outs, or entitlements, like welfare or unemployment, and disability. It’s just that those are OUR entitlements. It was like touching our private market Medicare – that was just wrong. We’re mad. The people cooking our tacos doen’t speak English anymore, and Arabs are moving into rural America, and raising lambs and stuff. We’re made, and no one is listening to us.

Do you ever get tired of commenting back and forth with yourself?

??google work providers earn $98 hourly……….After earning an average of 19952 Dollars monthly,I’m finally getting 98 Dollars an hour,just working 4-5 hours daily online… three to five hours of work daily… Weekly paycheck… Bonus opportunities…Payscale of $6k to $9k /a month… Just few hours of your free time, any kind of computer, elementary understanding of web and stable connection is what is required…….HERE I STARTED-TAKE A LOOK AT
…….yg…

The Masters don’t like it when their slaves revolt.

You realize taking government assistance is socialist? So you are feeling the Bern too.

Even Bernie would be disgusted with the likes of GrandTango sucking up tax dollars.

Why is FITSNews obsessed with any policy that will elect a failed Democrat PArty, again?

IOW: Why do so hate your country, that you want it destroyed past the point Obama – and the Democrat Party -has already done that?

It’s weird how some people equate more insured people, marriage equality, peaceful negotiations and a vastly improved economy with destruction. I guess there has been a sort of destruction or challenging of the white racists male power structure, but that’s a good thing for everybody.

I wouldn’t call it weird, more like uneducated racists from S. Carolina.

Barack the Magic Negro lives in D.C.
The L.A. Times, they called him that
‘Cause he’s not authentic like me.
Yeah, the guy from the L.A. paper
Said he makes guilty whites feel good
They’ll vote for him, and not for me
‘Cause he’s not from the hood.
See, real black men, like Snoop Dog,
Or me, or Farrakhan
Have talked the talk, and walked the walk.
Not come in late and won!

Oh, Rush is quite racist, just not well educated.

Rush is RICH! Why are black racists always broke? :)

Rush is DEAF from all of the illegal oxycontin that he took – that shit is ototoxic as hell!

It’s strange how blind liberals and Democrats are. I never would have believed that people could be so delusional, if not for total idiots, like you.

Of course the media does lead the stupid, and flat-minded.

I’m not going to hand this election to Hillary. Honest!

The Establishment hates a serious challenge. It drives them nuts.

Loyalty goes both ways, or not at all.