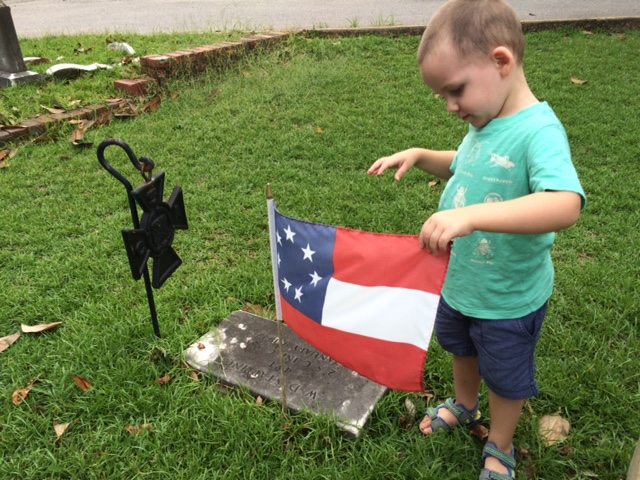 || By WILL FOLKS || One morning over the Labor Day weekend I took my family for a stroll through Elmwood Cemetery in downtown Columbia, S.C.  If you’ve never been, do yourself a favor this fall and check it out.  The park is located at 501 Elmwood Avenue … and most days it’s open from 8:00 a.m. to 5:00 p.m.  Also the Historic Columbia organization sponsors moonlight tours of the grounds.

Founded in 1856, the sprawling 168.5-acre cemetery was added to the National Register of Historic Places in 1996.  One of its oldest, most famous sections memorializes soldiers of the Confederate States of America (CSA) – including many unknown dead.  In fact this Confederate cemetery is one of the locations visited by 21-year-old white supremacist Dylann Storm Roof in the run-up to the “Holy City Massacre” earlier this summer.

That’s a shame … because the memory of these soldiers (like all of those buried in Elmwood) deserves better.

On the morning my family paid its visit, a late summer thunderstorm had rolled through the area the previous evening.  Branches and limbs from nearby trees were scattered everywhere, and the runoff from the storm had deposited piles of sand and mud all over the place.  The storm also did a number on the flags adorning the various graves.  Most had been blown over, although a few had been totally uprooted and sent flying across the grass.  Several were ripped beyond repair.

Those of you who read this website regularly will recall FITSNews leading the charge to remove the Confederate flag from the grounds of the S.C. State House.  And you may also recall there being a bit of buyer’s remorse in the aftermath of that effort.

While I still don’t think the flag should have ever been (re)raised in a position of sovereignty, I believe the ongoing demonization of white southerners is every bit as offensive.  Same with the racially motivated violence toward whites in the aftermath of the Mother Emanuel AME tragedy.

Seriously: Which flag do we blame for that shooting?

On this day, though, as my youngest son Phillippe and I walked through the cemetery we resolved to fix all the flags that had fallen during the recent storm – American and Confederate (even though my “allegiance” to the country that’s bankrupting me and spying on me has waned considerably in recent years).

“This is a ‘Federate flag, daddy?” he would ask at one tombstone.

“This is a ‘Merican flag?” he would ask at another.

Anyway, here are some pictures from our trip …

Banners of the South …

An American flag ripped by the storm …

Will Folks is the founding editor of the website you are currently reading.  Before that he was a political hack.  And before that he really was a rock star.

Colin Ross: Why I’m A Libertarian