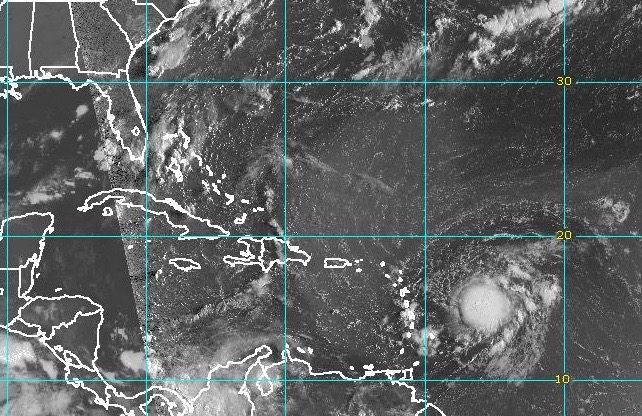 || By FITSNEWS || The 2015 tropical season in the Atlantic Ocean has been – as predicted – uneventful.  After an early tropical brush back in May, the basin has eerily quiet.

How come?  Well, as we explained last month it’s due to El Niño – the periodic warming of the central and eastern equatorial regions of the Pacific Ocean.  This year’s El Niño is one of the strongest on record, which means a more “robust” subtropical jet stream.

According to people with meteorological degrees, that produces elevated wind shear – which makes it harder for hurricanes to develop in the Atlantic.

Thus the 2015 forecast of only seven named storms, three hurricanes and one major hurricane.

Vying to become the first named hurricane to make landfall this season is Erika – a tropical system that’s headed toward the Caribbean as we speak.  According to the latest advisory, Erika is located 335 miles east of Antigua – moving west at 17 miles per hour.

The storm currently has maximum sustained winds of 45 miles per hour – but is projected to strengthen over the coming week.  In fact the latest five day forecast from the National Oceanic and Atmospheric Administration (NOAA) shows Erika headed straight toward Miami, Florida – as a category one hurricane.

As the Palmetto State remains in the realm of possibility for this system, we’ll continue to keep an eye on its progress.  So stay tuned …

South Carolina has seen 23 direct hurricane landfalls since 1893 – the most infamous being Hurricane Hugo in 1989. Fortunately the state has avoided any direct hits from major storms since then, although there have been several close calls – including Hurricane Irene in 2011.

They need to get more inventive with the names for tropical storms and hurricanes.

Appropriate name for a blowhard…

Well hurricanes are warm and wet………

Go back to using the phonetic alphabet.

The track models are pretty consistent over the next 72 to 96 hours and then some expected divergence. If Erika survives the hostile and avoids the larger islands of the Greater Antilles there is a good chance it blows up in to a Cat 3+ over the 86 to 90 degree waters near the Bahamas and the Southeast coastal areas.

I’m guessing this is a central florida event.

Not a bad call. The hurricane center always makes me nervous when they put this statement in their storm discussions. “One should remember to not focus on the exact forecast track, especially at the long range where the average NHC track errors during the past 5 years are about 180 miles at day 4 and 240 miles at day 5.” Especially when the steering currents in the Bahamas and off the SE coast are very weak. We could have a meandering hurricane that sticks around for several days to a week before making landfall or going OTS. One of the best historical analogs to Erika is David 1979, but the steering currents are weaker at least right now. I think the high in New England keeps it from going to far north. Well at least we have about a week to watch it, though evacuation calls for coastal location from Miami points north have to be made a minimum of 48 hours prior to land fall, 72 in some case.

If this track holds. does anybody have a couple of cheap tickets to the USC/UNC game next Thursday? Nothing better than a game in a tropical storm. Except that NC State game in 1999 w/ Hurricane Dennis.

I’ve made a tremendous deal (I’m the best at that!) with the weather gods to have a fantastic hurricane barrel down on Miami – this way we will displace a lot of hispanics (they love me and will vote for me) so we can swoop ’em up when they leave town. That’s gonna be a terrific opportunity to start herding illegal hispanics into camps and then I’ll line up rail road cars to transport them to the border (the Mexicans are going to pay for those train rides – I talked with them – they love me in Mexico) – in the mean time we are going to mark every illegal hispanic with a nice little yellow star – that’ll look tremendous when we walk ’em to the trains and Jorge Ramos gets to lead the procession – I love that guy – Da Donald

*Swears his next one will have a key start.*