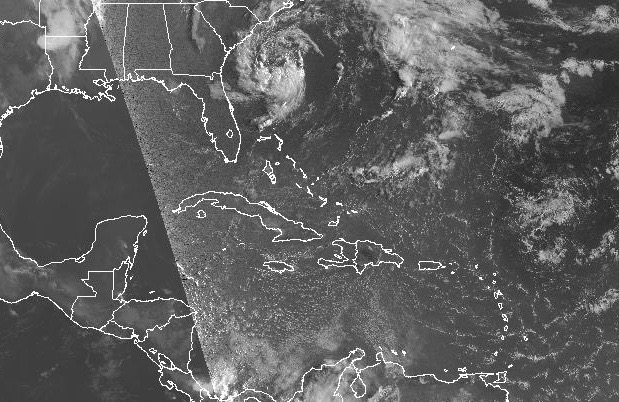 || By FITSNEWS || That system of low pressure off the Florida coast? Guess what … it’s now a tropical storm moving up the Georgia coast. A named storm, at that … the first named system of the 2015 hurricane season.

That was quick, right?

As of 5:00 a.m. EDT, subtropical storm Ana was positioned approximately 160 miles south-southeast of Myrtle Beach, South Carolina – with maximum sustained winds of 45 miles per hour.  The storm was moving north-northwest at one mile per hour.

A tropical storm watch is in effect for the Atlantic coast from Edisto Beach, South Carolina, to Cape Lookout, North Carolina, although (good news alert) Ana is not expected to organize or intensify prior to its center of circulation coming ashore sometime on Sunday.

In other words the storm is likely to bring rain and some decent waves for surfers … as opposed to damaging winds and flooding.

Experts have predicted a quiet 2015 season, with seven named storms, three hurricanes and one major hurricane.

Ana isn’t the first early storm.  A pair of tropical systems – Alberto and Beryl – formed in 2012, with Beryl becoming the strongest off-season Atlantic storm to make landfall in the United States.  In 2007, Andrea formed off the coast of Florida – claiming five lives.  She isn’t even the earliest system to bear her name, as a 2003 storm named Ana formed in April 2003.

Obamacare: By The Numbers

Don’t worry. The people now in charge in Congress who believe that humans co-existed with dinosaurs, and that the world is only 6,000 years old, will not let those damned America-hating scientists push their Godless commie agenda on us!

I don’t think the commie’s are really into global warming.

We know the Chinese aren’t.

Get out of here, you liberal impostor.

Hmmm, are there any tornadoes in China?

found on Wiki — yes, but Bangladesh has the most in number with the most fatalities — also the deadliest tornado in world history…

Damn.What is your agenda, commie? lol

All this could be solved by a tax cut for rich people.

Exactly, then they could buy up all the land after the peasants get washed out. ..

Real estate will be cheaper in Maryland … Blood in the streets …

“Never in history has increasing taxes changed the weather.”

it’s called a fucking storm…………
Sometimes these thing seem to happen – can’t figure exactly why but storms on the coast seem to happen with regular frequency.
And it appears that storms on the coast have been happening for quite some time too…….
Excuse me but I gotta get back to watching my DVD’s of “The Fire Next Time” and “The Day After”.
Seriously though, keep fucking with Mother Nature and her “critters” on a grand scale and we will regret it (probably deserve it too)

Not to mention fucking up Mother’s Day brunch at Chesnut Hill!!!!!!!!!

Tropical Storm Ana(L) may soon be pushing up and into South Carolina via her lower parts in the near future.