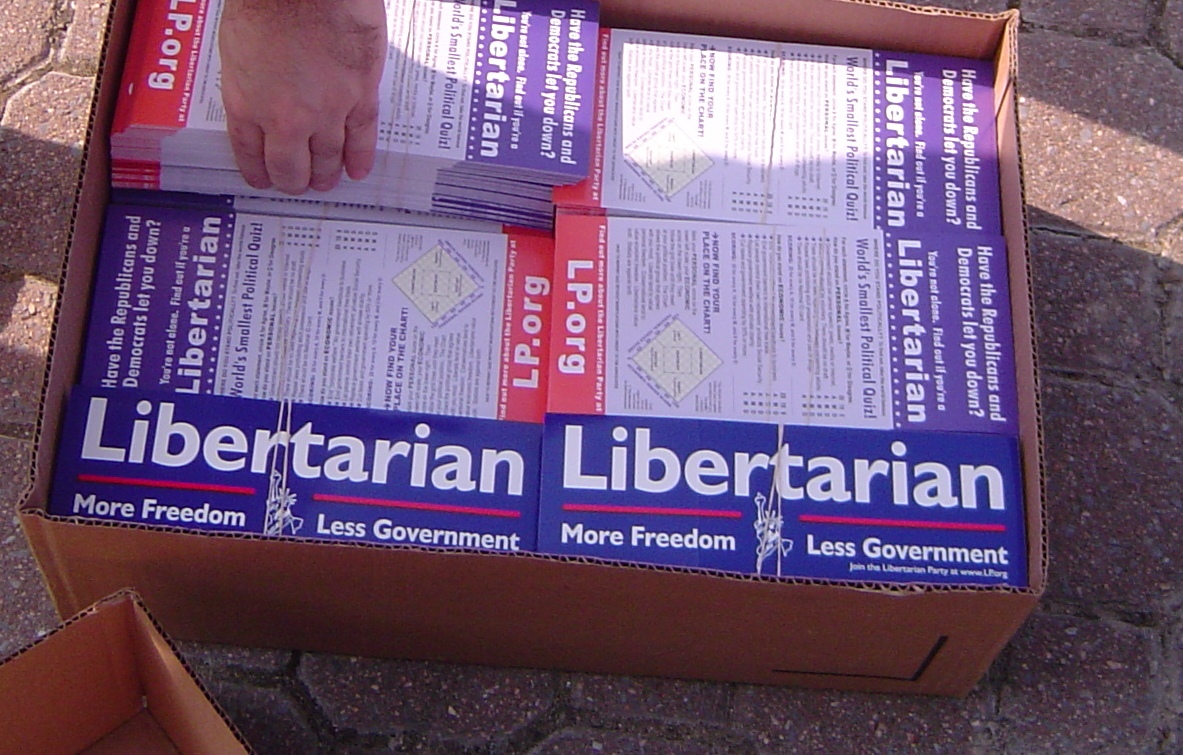 “CONSERVATIVES” AND “PROGRESSIVES” BOTH TRY TO USE GOVERNMENT FOR SOCIAL ENGINEERING

|| By COLIN ROSS || “Ultima ratio regum” is latin for the final argument of kings and was carved into every French cannon made under the reign of Louis XIV.

It’s an incredible reminder of what government actually is when you strip away all the rhetoric and laws.  Government is force, pure and simple.  Don’t pay your taxes, smoke a little pot, don’t mow your lawn against a city ordinance or any other of the hundreds of thousands of laws that governments create and a man with a gun will put you in jail.

Its because of this reason libertarians are so adamant about a limited government.  It has nothing to do with individual policies or ideas.  Our obsession with limiting government comes from a deep respect for individuals.  Classical liberals don’t view America as “one nation under God” so much as hundreds of millions of people living out their individual hopes and dreams peacefully co-existing in one land.

America was founded on the idea that every human has the right to their own pursuit of happiness.

Any good investor knows the importance of diversification.  Because no matter how sure one is in an investment, markets and needs have a way of constantly changing.  Especially in a world where technology has advanced more in the past 50 years than it has in all of human existence.  So even if you believe that president Barack Obama can make good investments, isn’t it more prudent to think that hundreds of millions of individuals interacting in the market provides a much safer portfolio for economic growth?

The problem gets even worse because government doesn’t have the key incentive that makes the free market so powerful – failure.

No location on the planet has experienced more failure than Silicon Valley – and no where on the planet has produced such mind-boggling amounts of innovation.  For every Paypal and Facebook there are literally thousands of failed internet companies that for one reason or another didn’t take.  Government doesn’t respond in the same way – which is why we still have a railroad system from the 1950’s and ethanol subsides are still a thing even though everyone outside of Iowa (including environmentalists) recognize how bad corn ethanol is.

The libertarian position is actually a very humble one, that we have no clue what is best for anyone else.  Libertarians believe that people should be allowed to be themselves.  Its why we supported the LBGT movement decades before the democrats even acknowledged it and its the same reason we fight for the freedom of speech even when it involves the KKK or the Black Panthers.

Libertarians aren’t pro-gay, pro-women, pro-immigration, or any of the other “pros.” Libertarians are simply pro-human rights and everything else falls into place.

We live in the most incredible time in all of history with limitless amounts of knowledge at the fingertips of anyone with access to the internet.  Free markets and global trade are bringing literally billions of people out of poverty, increasing life spans, and creating better lives for people all over the world.  Large governments cannot even hope to keep pace with the leaps and bounds of humanity.  In the end the philosophy of a classical liberal is a recognition that humans of all walks and creeds have value even if they are very different from our own.

COLIN ROSS: WHY I’M A LIBERTARIAN
|| By COLIN ROSS || I am a doofus.
Colin Ross is a “peace-loving, pot-smoking, free-market loving liberal.”

There, edited it down for you.

That goofy picture at the bottom and his announcement that he likes to smoke pot drives me crazy. It feeds the stereotype that libertarians just want government to let them smoke dope all day long and are libertine in general.

He comes off as adolescent and confirms the bias most people have about libertarianism in general.

It feeds the stereotype that libertarians just want government to let them smoke dope all day long and are libertine in general.

you misunderstand. I don’t want the government to let me do anything. I’m saying government has absolutely no right to tell me how to live my life as long as I’m being peaceful. Rights don’t come from government unless you think we are owned by it.

I don’t “misunderstand”. I’m telling you what people think; the stereotype. It’s you that misunderstand. I never said that your rights come from government. Put away the strawman.

Not only is it stupid to announce to everyone that you do an illegal drug(and I agree that it should be legal), but you do no service to libertarianism in general with a silly photo attached to your attempt at persuasion with the statement that you break the law because you’re a libertarian. If anything, it’s anti-persuasive.

It’s just stupid, and if you can’t get that then you’re a lost cause.

It has nothing to do with “right” or “wrong” either.

A government is THE PEOPLE. You cannot have a PEOPLE, or a GOVERNMENT, without a Soul.

Libertarians have NO Soul. And as we see with the baby-mutilation and Killing, liberals have no soul.

You libertarians want the extermination of morals so you can feed your greed, and pleasure yourselves. Your selfishness is all that matters. Liberals want to impose their false religion, and its stringent list of moral dictates, on us.

Neither ever has, or ever will, work.

We built this country with our eyes on the one and only living God. And if we don’t embrace him now (as much as ever) the soulless like you will continue to take our nation from us.

I am a Christian and I can say this with all certainty. God’s himself entrusted us with free-will. He does not exempt us from the consequences of our actions, but he gave us the freedom to choose our own path. I have never understood the arrogance on the part of my brothers and sisters in Christ that somehow we need to step in and fill the void. The idea that somehow God miscalculated at it is up to us to remedy that is absurd to me. No, this country, this world is not YOUR home! Your residence here is temporary. If you truly believe in Christ, you will simply follow his two greatest commandments while you are here. Love God and love your neighbor. Those commands should keep all Christians plenty busy.

I am a Libertarian because the ghost in the political machine has an agenda, and it doesn’t care about Christianity. It cares about getting money from you and using it for its own survival. Jesus himself exposed this corruption when he turned over the tables of the money changers in the temple. I personally believe that I could do more to love God and my neighbor if I had more of my own money after taxes. Why should I support more of my money being spent to keep this parasite alive when we can freely choose where we want our money to go?

Libertarians: all of the the rights, none of the responsibilities.

Perhaps a detailed list of what responsibilities are needed to have rights would help. Or is money just enough?

Libertarians are like anarchists – joining others with the same views doesn’t really make sense.

No Heart: Take away the parts of government that help the poor and needy.

No Brain: Take away the parts of government that prevents and punishes businesses from hurting people.

While we are quoting Winston Churchill:

“The dis­cov­er­ies of heal­ing sci­ence must be the
inher­i­tance of all. That is clear: Dis­ease must be attacked, whether
it occurs in the poor­est or the rich­est man or woman sim­ply on the
ground that it is the enemy; and it must be attacked just in the sane
way as the fire brigade will give its full assis­tance to the hum­blest
cot­tage as read­ily as to the most impor­tant mansion….Our pol­icy is
to cre­ate a national health ser­vice in order to ensure that
every­body in the coun­try, irre­spec­tive of means, age, sex, or
occu­pa­tion, shall have equal oppor­tu­ni­ties to ben­e­fit from the
best and most up-to-date med­ical and allied ser­vices available.”

Sounds like a no good stinking bleeding heart liberal to me!

This post, and poster, is VERY appropriate for FITSNews. You represent each other well.

Ashley Madison should sponsor you infinitely, and you need to post equal-mind musings like that of Ross’, 24/7. This is you. You are mirrors of each other.

But an Ashley link would have helped that SC Political site.

Always run from what, and who, you are. Don’t you?

Especially w/ PP breaking, I’d be ashamed too. Your problem is: Everybody knows you’re a liar. Look at what’s happening to Hillary. Dumbass.

Nice post, Colin. Sorry the commenters here don’t care about or understand the libertarian philosophy. Why they frequent the site, we’ll never know.

Did we really need the “Pot Smoking” in the signature? I don’t have a personal issue with it, but you have a lot of people that write off the libertarian philosophy because they think it’s all about getting high, especially conservatives that would otherwise agree. You don’t have to make laws about it, and you can and likely should repeal most if not all drug laws, but making that a central part of a platform and boasting about it is not be helpful in getting your way accepted and implemented.

Some people are tired of living in the shadows, being swept under society’s rug.

In my mind, people who boast which political party they belong to have more to be ashamed of than someone who admits he smokes a certain plant.

The drug war is one of the most disgusting actions of our government. It will only end when regular, everyday people start taking a stand for every humans right to the pursuit of their own happiness. Its also my way of sticking my middle finger to the government. But hey let me know when you stand for anything.

Don’t be a self-righteous douchebag. You breaking the law by smoking a joint isn’t bringing about libertarianism to society as a whole any time soon.

You want a model of how to convince people to be libertarian? Look at Ron Paul, who doesn’t do drugs but says they should be legal.

He doesn’t post silly adolescent pictures of himself to opinion pieces either. He carried himself with dignity and respects traditional culture regardless of his anti-authoritarian stance.

It’s pretty tough to hate Ron Paul for noble reasons(though some try), you- not so much.

“Look at Ron Paul, who doesn’t do drugs but says they should be legal.” Br>
Hmmm – lost me on this one.

” but making that a central part of a platform and boasting about it is not be helpful in getting your way accepted and implemented.”
Exactly. Do what the Republicans do and just be a big fat hypocrite – never tell the truth – get your freak on under cover and in public be a moralizing crusader.

Let’s just be done, nominate the Bush family as the Imperial Royal Family. Jeb! for Emperor of the American Empire. World Conquest by 2030. Jeb! for Supreme Leader of The World!

LOL Did I strike a nerve or something???

Good post, Colin! While I understand what some on here are saying with regard to the “image” that some perceive of Libertarians as pot heads and druggies, I also appreciate where you are coming from and the need or desire to extend that middle finger. Hang in there and keep up the good work!