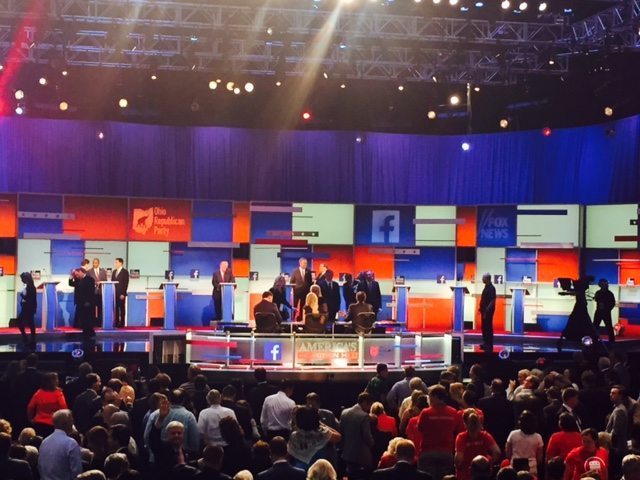 || By FITSNEWS ||  The first debate of the 2016 “Republican” presidential primary is in the books.  Well actually there were two debates – one featuring the lowest-polling seven candidates (according to Fox News) and the other featuring the top ten contenders.

(For our live-blog of the contentious proceedings, click here).

We’ll be expending all sorts of ink (pixels?) in the days ahead assessing what did – and didn’t – do down in the exchanges, but here’s a look at how the candidates thought they did.

Donald J. Trump was the unequivocal winner oftonight’s first Republican Primary debate hosted by FOX News.  Mr. Trump, the definitive first place candidate in all recent national and state polls, proved himself to be a skillful debater, out performing his rivals with decisive responses and swift counter-attacks. Mr. Trump excelled in what was his first ever debate against a group of all talk, no action politicians.

Mr. Trump stated, “I am very proud of my great performance tonight. I am not a debater, but I am a winner. If I am elected I will make this country a total winner — I will Make America Great Again.”

Mr. Trump condemned the incessant calls for political correctness and instead called for action. Mr. Trump also addressed the total epidemic of illegal immigration and promised to secure the border once and for all with an impenetrable wall. Mr. Trump spoke about his great success as a businessman and discussed his pro-life stance. Mr. Trump’s truthful talk continues to resonate with voters across the country as he shares his vision to Make America Great Again.

And here’s the statement from “establishment” favorite Jeb Bush …

Jeb Bush won the debate demonstrating presidential leadership by offering an optimistic economic vision that stood in sharp contrast to the subpar record of Barack Obama and pessimistic plans of Hillary Clinton. He also presented a unifying, conservative message of reform on education and immigration that the crowd in Cleveland responded to enthusiastically.

Jeb knows he can fix what ails America, because he’s done it as a successful, conservative, accomplished governor.

Here are two highlights from the debate:

GOV. BUSH: No. I don’t. I don’t believe the federal government should be involved in the creation of standards directly or indirectly. The creation of curriculum or content. It is clearly a state responsibility. I’m for higher standards, measured in an intellectually honest way with abundant school choice, ending social promotion and I know how to do this, because as governor of the state of Florida I created the first statewide voucher program in the country. The second statewide voucher program in the country and the third statewide voucher program in the country. We had rising student achievement across the board. Because high standards, robust accountability, ending social promotion in third grade. Real school choice across the board. Challenging the teacher’s union and beating them is the way to go. And florida’s low income kids had the greatest gains inside the country. Our graduation rate improved by 50 percent. That’s what I’m for.

Watch here: Jeb: The Democrats are Wrong: We Can Grow this Economy and Create Jobs

GOV. BUSH: There are 6 million people living in poverty today, more than when Barack Obama got elected. 6.5 million people are working part time, most of whom want to work full time. We’ve created rules and taxes on top of every aspiration of people, and the net result is we’re not growing fast, income is not growing. A four percent growth strategy means you fix a convoluted tax code, you get in and you change every aspect of regulations that are job killers. You get rid of Obamacare and replace it with something that doesn’t suppress wages and kill jobs. You embrace the energy revolution in our country. This President and Hillary Clinton who can’t even say she is for the XL Pipeline even after she’s left? Give me a break, of course we’re for it. We should be for these things to create high sustained economic growth. And, frankly,  fixing our immigration system and turning it into an economic driver is part of this as well. We can do this.

Here’s what U.S. Senator Rand Paul‘s campaign had to say about his effort …

Tonight, Senator Rand Paul proved he’s a Constitutional conservative who will defend the entire Bill of Rights. Senator Paul will fight and do whatever it takes to protect America and the principles of liberty and opportunity that have made America great.

It is Senator Paul’s message of opportunity and liberty that has resonated across the country–a message that has allowed Senator Paul to reach across the aisle and share conservative principles in places Republicans don’t go like Detroit, the South Side of Chicago, Ferguson, the Urban League, and UC Berkeley.

Wisconsin governor Scott Walker‘s campaign had this to say …

Gov. Scott Walker delivered a strong, steady, and most of all, presidential performance at the Fox News debate tonight. Walker devoted his time on stage to taking on Democrat Hillary Clinton and sharing his record of reform and results in Wisconsin. See highlights of the debate below.

I thought Kasich did a good job, and Trump held his own. The rest of the bunch did little to distinguish themselves from the pack. Scott Walker looks like the child molester in The Green Mile.

Kasich seems to be one of the more moderate players on stage, but he lacks the popularity. If he keeps it up though he may get himself up there.

If the Republican party were wise they would throw their weight behind him. He has the potential to get the moderate voters out to the polls for him, something a lot of the other candidates aren’t capable of doing.

Hillary won this debate. I hope these guys don’t start dropping out anytime soon because they are going to pick themselves apart the longer they stay in.

There was only one question that was truly answered and that was answered with or without a show of hands. There were many sound bites, sound bites are fun but most of the time lack substance.

Do I care what their machines think, not really. In my opinion it’s too early to declare winners or losers, the process just started.

Christie did well. Kasich did well. Donald was Donald. The others– Walker, Bush, Cruz, Rubio, Paul, Huckabee and Carson were just cheerleaders repeating the same stuff over and over– nothing new. Fox News didn’t do them any favors by tossing softball questions to everyone except Trump.

I think Kasich did well but the deck was stacked for him in Cleveland and I did not see tough questions thrown at him!

I think Kasich outdid Bush, and that’s all that probably matters. Cruz is done, Donald will simply suck out the rest of his support. Come Feb 2016 it will be Kasich, Bush, Rubio, Paul and Christie.