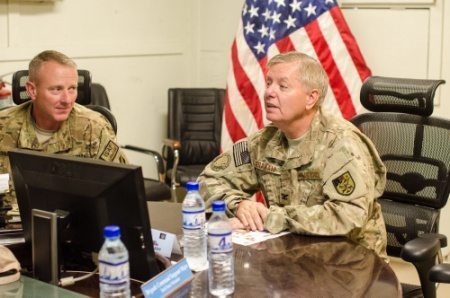 || By FITSNEWS ||  Of all people, U.S. Senator Lindsey Graham should know better than to exaggerate his military service.  After all, he’s been busted once before doing just that …

But Graham – who kicked off his presidential campaign this week – couldn’t help himself.

In an email accompanying his formal presidential announcement in Central, S.C., Graham referred to having “served in Afghanistan.”

First of all – just so there’s absolutely no confusion as to what Graham said – here’s the context of the comment within his “I’m Running for President” email, sent to supporters this week:

I’ve visited and served in Afghanistan and the Middle East more than 20 times gaining first-hand knowledge about terror groups that threaten our way of life.

Here’s the thing about Graham’s remark.  Yes, in 2008 he was deployed to Kabul, Afghanistan – where he stayed for five days.  And in 2007 he did a pair of brief stints in Iraq.  In each case, Graham was in decidedly non-combat situations “under heavy protection,” according to our military services – guarded “better than (a) general.”

What was he doing?

In Afghanistan, he reportedly trained military judges and attorneys.  In Iraq, he is said to have worked on detainee and rule-of-law issues.

Of course in a 2007 interview with The Washington Post, Graham offered an interesting characterization of his environment.

“It’s a dangerous place,” Graham said. “I carried a 9mm like everyone else, and there were several times I was glad I had one.”

FITS spoke with several War on Terror veterans who took a dim view of Graham’s “soldiering.”

“It was a political stunt, nothing like my deployment,” said Jonathan Lubecky, a former Marine and retired U.S. Army sergeant who did a fourteen-month tour of duty in Iraq.

Several other War on Terror veterans we spoke with shared Lubecky’s sentiments – but declined to go on the record for fear of reprisal.  One did put the difference between Graham’s deployments and “real tours” pretty bluntly, though.

“There’s a difference between being a soldier and playing soldier,” one Afghan veteran told us. “I’m guessing he wouldn’t know the difference.”

We’re not questioning Graham’s right to say he “served” in these conflicts.  He can say that without fear of contradiction.  We’re simply questioning whether it was advisable.

Related Topics:afghanistanIraqLindsey Graham
Up Next

Mark Sanford: “If You Having Girl Problems …”