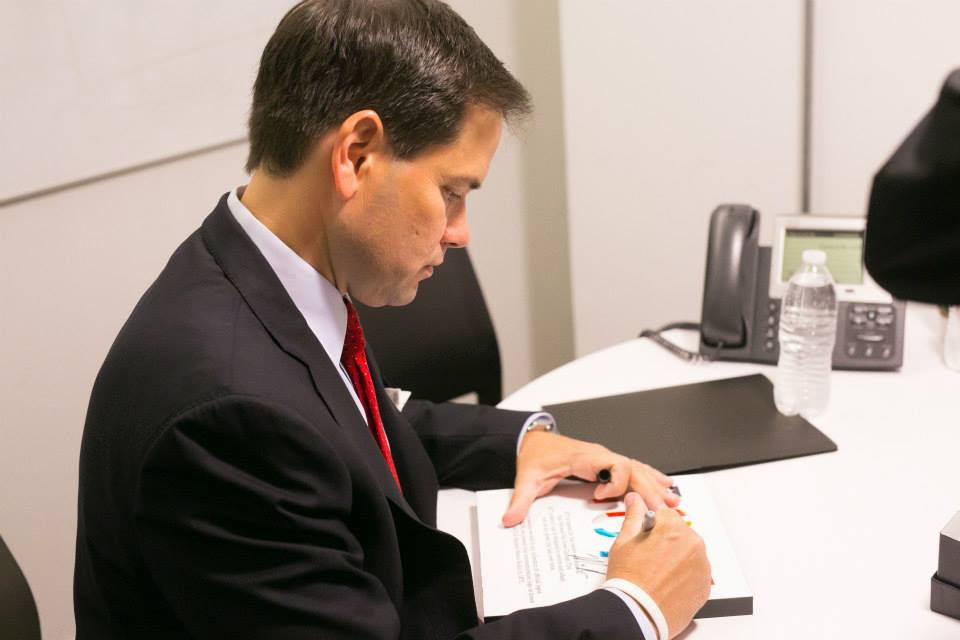 || By FITSNEWS || U.S. Senator Marco Rubio of Florida will travel to early-voting South Carolina this week – filing paperwork to appear on the Palmetto State’s “First in the South” presidential ballot and appearing in a forum on the issue of national security.

Rubio will appear at the headquarters of the S.C. Republican Party on Monday afternoon, where he will “file the necessary paperwork to appear on the ballot in the First-in-the-South Presidential Preference Primary.”

From there he will travel to socially conservative Greenville, S.C. for a reception with an Upstate chamber coalition and a meet and greet rally with supporters (both on Monday evening).

On Tuesday, Rubio will participate in “a national security forum hosted by Americans for Peace, Prosperity and Security (APPS).”

At this event he will “have an in-depth discussion with South Carolinians on U.S. foreign policy and national security.”

We were initially inclined to view Rubio favorably, but he’s been a profound disappointment on many levels.  In fact by the time he announced his candidacy back in April, we were pretty much done with him.

“Like so many ‘conservative’ politicians before him, we believe (Rubio) had tremendous potential … but he chose to go to the dark side rather than stand for freedom and free markets,” we wrote back in March.

Since then Rubio’s sellouts have only gained momentum.  Last month, for example, he cast the deciding vote in the U.S. Senate in support of president Barack Obama‘s crony capitalist trade deal – which will be terrible for the national economy and for the economy here in South Carolina.

I had hopes for Rubio. Being a native Floridian, I’ve known many fine, Conservative 60’s era Cuban families who could make you feel lacking in the patriotism dept. He turns out to be a empty suit IMO.

Don’t worry. He’s Bush’s choice for VP. Once the Bush family contacts in the CIA have David Rivera killed in an auto-accident Rubio is home free.

Yeah, he has drifted downward on my likability scale. Not hearing much out of him that would inspire the masses.

Rubio loves this country and is very thoughtful on issues.Great VP candidate.

Just leave the check at SCGOP headquarters. Thank you.

Sort of a waste of money. He continues to fall in the polls, has been eclipsed by Bush, and is sort of just a floundering candidate. Marco, we hardly knew ye…….

Another clown climbs into the car! How many more can it hold? We’ll find out!

What a cute hairstylist or CG model he is