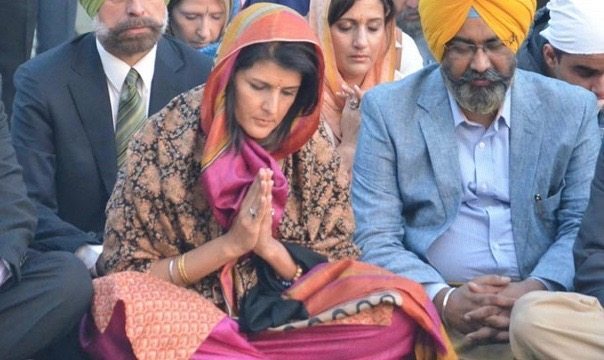 IS IT TOO EARLY FOR A “SIKH JESUS” JOKE?

S.C. governor Nikki Haley has “called our state to a day of prayer, fasting, repentance, and seeking God’s face.”  Which God’s face are we seeking?  That’s TBD.

The second-term “Republican” is inviting South Carolinians to participate in “The Response SC,” a gathering of evangelical Christians scheduled for June 13 in North Charleston, S.C.   “The Response SC” is a project of the American Renewal Project – the same group which organized a massive 2011 event in Texas featuring two-time presidential candidate Rick Perry.

According to organizers, the project is a “Holy Fast and Sacred Assembly (key words Holy, sacred, weeping, mourning, repentance).”  It is described as “multi ethnic, non denominational, multi generational” – although only evangelical Christians will be permitted to participate in the program.

“This is the time for Christians to come together to call upon Jesus to guide us through unprecedented struggles, and thank Him for the blessings of freedom we so richly enjoy,” event organizers stated.

As for the governor, she “will welcome and maybe pray or give testimony.”

Haley grew up as a practicing Sikh but claims to have converted to the Christian faith when she married her husband Michael in 1996.  Of course her statements on matters of faith have evolved as her political career has advanced.  In fact Haley’s “conversion” has been openly mocked by Das Racist, a Brooklyn-based hip hop group with Sikh roots.

In 2012, one of Haley’s Democratic critics took heat after he referred to the governor as “Sikh Jesus.”

Last November, just days after her reelection, Haley broke down in tears after paying “obeisance” during her pilgrimage to the sanctum sanctorum of the Harmandar Sahib – a.k.a. the “Golden Temple” (the most sacred site in Sikhism).

Before paying obeisance, Sikhs take a holy dip in the water pond at its the marbled periphery – with the understanding this glorified bath washes away “all their bad deeds of previous births.”

Here’s some local coverage of that visit …

Obviously we don’t care who Haley prays to – or whether she subscribes to one (or more than one) religion.  That’s her business, and quite frankly she should keep it that way.  As should all politicians.

There is no Christian, Jewish, Buddhist, Hindu, Sikh, Muslim or atheist way to perform the core functions of government efficiently, fairly and transparently.  You either do it or you don’t.

Politicians who cloak themselves in family and faith (or in Haley’s case, faiths) typically do so because they are hiding something.  And you know what?  Maybe Haley needs two faiths after all – because she’s got plenty to hide.

During her first term as governor of South Carolina, Haley advanced a fiscally liberal agenda on taxes, spending, education and (most notably) government-subsidized health care.  And during her second term, she appears poised to cave on the biggest fiscal issue of the year.

Those are the issues we care about … not being told to bow down to “Sikh Jesus.”

Of course this “Trikki Prayer-a-palooza” isn’t about faith … it’s about Haley positioning herself in advance of the 2016 “First in the South” presidential primary.