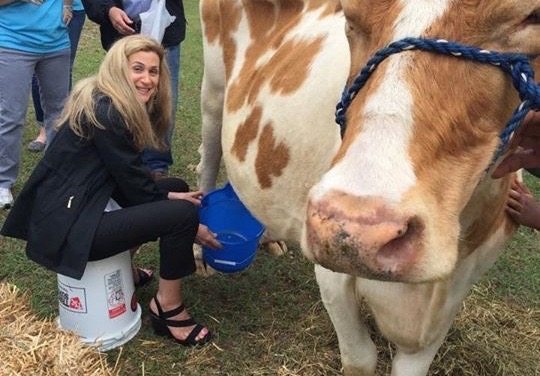 “SHE TOLD US THE STORY … ‘BOUT FREE MILK AND A COW”

|| By FITSNEWS || S.C. Rep. Beth Bernstein is one of the most glamorous members of the South Carolina General Assembly.  Of course that’s not really a compliment is it?  Glamor and female members of the S.C. state legislature typically go together like tortilla chips and … Ben-Gay.  Maker’s Mark and … antifreeze.  A delicious balsamic vinaigrette and … a bowl full of nails.

Anyway … the difference here is that Bernstein isn’t just “State House hot,” she’s “hot hot.”  She’s also got amazing taste in shoes, although obtaining visual evidence of her kicks is quite the undertaking.

Bernstein did us a solid by posting a nice pair on her Facebook page this weekend, though (above).  She was attending the Sparkleberry Country Fair, an annual event held on the campus of a Clemson University’s North Columbia, S.C. agricultural research center.

Yeah … is anybody else singing that Georgia Satellites song right about now?

Related Topics:Beth Bernstein
Up Next

James Metts Gets One Year In Prison