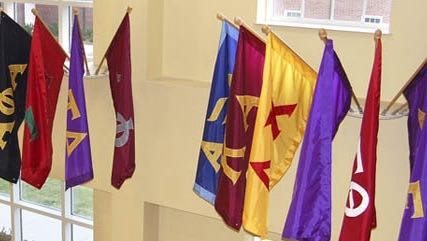 IGNORE BLANKET CONDEMNATIONS IN THE AFTERMATH OF TRAGEDIES …

|| By TAYLOR BROWN ||  I would like to start off by saying there is absolutely no excuse for what the members of Kappa Delta Rho at Penn State did … or what the Sigma Alpha Epsilon members at the University of Oklahoma did.

Sexual assault is always wrong – anytime, every time – it’s disgusting and abhorrent.  Same goes for racism – it is universally repugnant and should have no place in today’s society.  Fraternity members (or members of any organization) who mock or condone either sexual assault or racism deserve our condemnation.  And within the Greek universe, we must stand united against physical violence on pledges – or any activities that can lead to the death of a human being just because they’re part of an organization.

That being said, Greek life does have some amazing qualities.  Which is why making blanket statements like “end Greek Life,” etc. in the aftermath of tragedies does absolutely nothing to change the current system.  In fact such blanket statements punish those who are trying to help.

As a Zeta Tau Alpha at Wofford College (Theta Zeta Chapter), my sorority raised over $30,000 my senior year.  In the 2012 fiscal year, Zeta, as a whole, donated $384,039 to Breast Cancer Awareness and Education.  This past month, the Theta Zeta chapter raised over $2,000 in pennies to support special needs.  In just the top ten national sororities, the amount donated to important philanthropical pursuits over the last year totals $5,077,427.

That’s over five million raised by young women between the ages of 18-22 – women who are fighting an unfriendly job market, student loans and a host of other brutal economic realities.  So if you scrap Greek life, many extremely important causes would lose money that helps them continue doing good.

You’d also be discouraging academics, as members of the Greek life system typically boast higher grade point averages (GPAs) than non-Greeks.  Why?  Because members are put on academic probation if they fall below the required GPA.  This makes the school look better, as well as helps Greeks find jobs after graduation.

Carolina also has 66 percent of Greek life members involved in other organizations on campus.  At Wofford, ZTA had 100 percent of its members involved in other organizations on campus – involvement which fosters a spirit of being dedicated to campus life and making students do more than “just being Greek.”  This shows up in the freshman to sophomore retention rate of all Greeks (94.2 percent) compared to non-Greeks (83.5 percent).

Many Greek life organizations offer scholarships to outstanding members that exemplify the traits of their organization—cutting down on their student loans and making college more affordable.

Being involved in Greek life teaches members how to work with people (even if you may not like every person in your organization) for a common goal. Being Greek teaches a devotion to high ideals: “to prepare for service and learn the nobility of serving, thereby earning the right to be served; to seek understanding that we might gain true wisdom; to look for the good in everyone; to see beauty, with its enriching influence; to be humble in success, and without bitterness in defeat.”

I do think reforming the ugly and disgraceful parts of Greek life is necessary in order to make the organizations live up to their full potential.  Furthermore, I believe if you have a group of anyone, you’ll always find that bad people will do bad things.

Well guess what: You need to blame the individual – not the group.

The truth is fraternities and sororities breed leaders.

Let me repeat myself: There is absolutely no justification for sexual assault, racism, physical violence against pledges, etc. – and pretending one exists is not my goal in this column.  I truly believe, however, there are compelling reasons to keep the Greek system in place.  I also believe we should give the organizations the tools they need to improve and resolve outstanding problems rather than cutting them out of the college experience altogether.