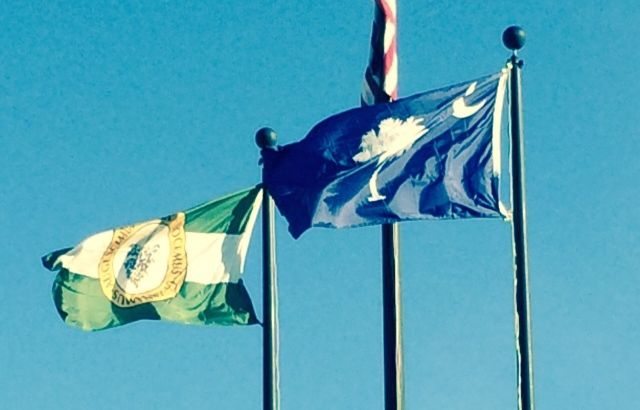 || By FITSNEWS ||  First of all, who in the hell knew Richland County, S.C. had its own friggin’ “county flag?”  Sheesh … what a waste of taxpayer money.  Second … why is the county “in distress?”  Because if our pic from the county court house this morning (above) is any indication – it is.

One of our sources spotted the county flag flying upside down on the morning of Friday, February 6, 2015 … which according to the USA Flag Supply website means “there is extreme danger to life or property.”

Naturally, we’re kidding … we don’t think the county government is in any imminent danger (although if it keeps disenfranchising its citizens, it might have reason to worry).  We’re sure some taxpayer-funded maintenance man simply wasn’t paying attention.

Of interest, you can be charged criminally for flying the U.S. flag upside down – which one Pennsylvania man found out the hard way last May.

Joshua Brubaker of Blair County, Pennsylvania was charged with flag desecration (and “insult”) after hanging an upside down U.S. banner from the side of his house.

“If I don’t have a right to fly that flag upside down, which means a sign of distress, which this country is in so much distress right now, then what’s the point of having it?” the American Indian said, according to WPXI TV 11 (NBC – Pittsburgh, Pennsylvania).

What prompted police to take action against him?

According to the local township’s assistant police chief, L.J. Berg,  “I had an individual stop here at the station, a female, who was in the military and she was very offended by it.”

I’m surprised the Columbia flag doesn’t a symbolic dollar sign floating away into the sky, or maybe piles of dollars being set on fire.

They could do so much better with the symbology. Time to create a committee.

The new flag should be a picture of someone tripping over a bum walking to work downtown.

Or a gang shooting in 5 points. (Imagine a crowd fo 20 or so colege kids in a circle with a gangbanger car driving off)

Or a USC student leaning over an old busted pallet vomiting on the railroad tracks by the stadium.

Or EIGHT (count’em!) large palm trees decorating the caged overpass from slumville 1 to slumville 2 on I-277

The obvious problem for Richland County could be diagnosed, but some people could not swallow the medicine.

Your cat is ugly.

Has anybody else noticed that the Confederate Flag on the Statehouse has been flying upside-down for months now?

OK fine. Don’t salute it. Find a better iconic symbol and salute that instead.

I heard an emergency meeting was called this afternoon, it’s been corrected. Bill to the state was approximately $2500.

Niggers hung it upside down and they had to bring in white people to fix it, so the $2500 was worth it.

Dumb fucking crackers would think it was hung upside-down.

And the DANs thought they were hanging it upside down.

Your daughter had her hand in my zipper while I was hanging it, and I got distracted. Sorry

LOL …. It looks the same either way.

It is the thought that counts: I would defend the rights of the Citizens of South Carolina to exhibit and fly that flag at every opportunity.

That iconic symbol IS an expression of free speech. Period.

Will you defend it with your life? I wanna see that.

It is not a symbol of free speech. It is the flag of the Confederacy. You motherfuckers lost. Strike your flag before I come and take it down and burn Columbia again.

That was Sherman, but whatever, it’s a stupid flag of a losing side that only exists in the imagination of nostalgic bigots these days.

You confederates are some of the saddest losers on the planet. Why would you fly a flag that says “Hey look! I agree with slave owning pussies who got fucking crushed by the North and we’re still sorta trying to catch up with the rest of the country, even parts that didn’t exist back then!” So stupid.

TBG thinks, that instead of putting the flag in a museum…we should put it back atop the dome, but UPSIDE DOWN, to show our complete and utter disdain…

Isn’t there something about South Carolina school busses that might be a bit more important? And how is Michelle’s school lunch going down? …

Is this the “summer news slump” happening in February?

Don’t worry Obama is dragging your old ass into the future. Could you tone down the kicking and screaming, though? Thanks.

Now the city of Columbia is going to want their own flag.

They already have one, they had it before Richland County had one and RC has had theirs since 1993 at least. I remember flying in front of 2020 Hampton St when I went to several council meetings that year.

The vile Yankee race sucks. Piss on all carpetbaggers and scalawags.

Comrades, if South Carolina was more like Massachusetts, everything would be fine … a true workers’ paradise.