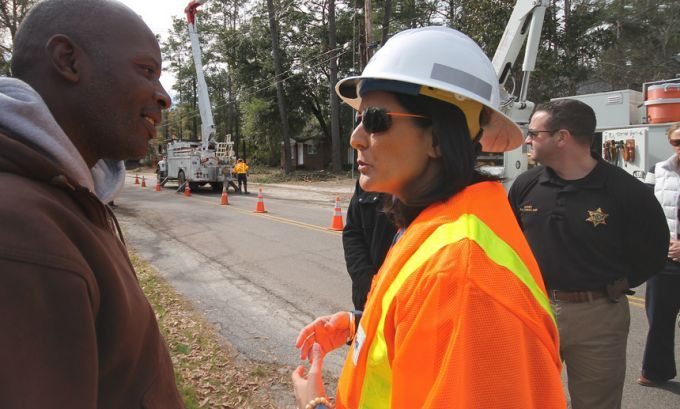 || By FITSNEWS || South Carolina governor Nikki Haley is having a hard time lining up legislative support for her massive tax swap proposal – which would trade a rapid ramp-up in the gasoline tax with a more gradual decrease in individual income taxes.

Sources tell FITS Haley is introducing the proposal piecemeal … but that she’s have trouble getting lawmakers to put their names on the different pieces of the puzzle.  Three of the governor’s staunchest allies in the S.C. House of Representatives – Nathan Ballentine, Ralph Norman and Tommy Stringer – reportedly refused to bite on the bill, while another (Todd Atwater) would only file one part of the legislation.

“They can’t get no satisfaction,” one lawmaker told FITS.

Haley has been making a full-court press in support of her plan – which she claims would represent a $5.5 billion tax cut over the coming decade.

The problem?  Liberals (including lots of establishment “Republicans”) don’t like the notion of less money flowing into government coffers, while conservatives don’t trust Haley’s estimates.  Meanwhile both sides agree Haley’s plan fails to specify long-overdue reforms to the S.C. Department of Transportation – which is on its second director since Haley took office.

By far the most substantive rebuke of Haley’s plan came courtesy of the S.C. Policy Council – a libertarian leaning think tank that bashes both Democratic and “Republican” politicians.

According to a fact sheet disseminated by the group, Haley’s plan is “a shell game that would do little to improve South Carolina’s roads” – a proposal “based on contrived assumptions, impossible predictions, and misleading promises.”

“Tax swaps aren’t tax reform,” the S.C. Policy Council concluded.  “The governor would like to paint her plan as a tax cut for all South Carolinians.  It isn’t.  The poorest citizens, who effectively pay no income tax due to state refunds and the federal earned income tax credit, would feel the burden of the gas tax increase but will have no offsets elsewhere.  Genuine tax reform is not based on swaps, but broad-based cuts that allow all citizens to keep more of what they earned.  Any tax plan that approaches cuts with a focus on their revenue impact is coming from the wrong place.”

The S.C. Policy Council also criticizes Haley for shifting funding from long-overdue maintenance and paving to unnecessary new projects – like this.  It also mocks her “reform” plan as being ”

“I was hoping we would go for real tax relief,” she said.

Anyway, we’re told Haley will eventually find sponsors for her bill … but its failure to attract strong support at the outset (even from some of her staunchest allies in the S.C. House) is a terrible sign for its long-term prospects.

Frankly, that’s fine with us …

South Carolina’s roads and bridges do need to be fixed … but we don’t have to raise the gas tax to do it.