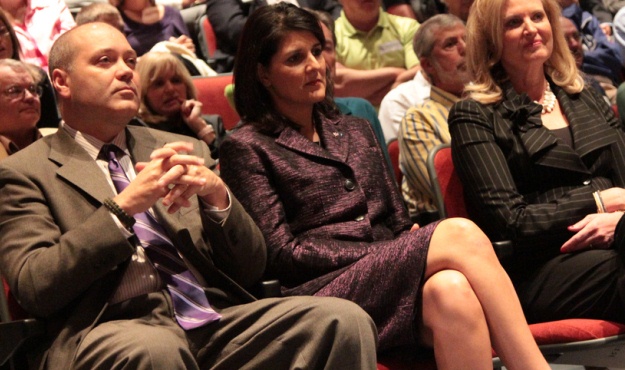 || By FITSNEWS || During her tenure in the South Carolina House of Representatives (and her 2010 campaign for the “Republican” gubernatorial nomination), Nikki Haley was a strong advocate for expanded parental choice in education.

Unfortunately, her support for school choice evaporated the moment she captured the GOP nomination … with her telling reporters in August 2010 that choice was “not a priority” and would not be her focus as governor.

Haley has been true to her words … in fact her most recent education proposals represented a full-fledged embrace of the Palmetto State’s failed status quo.

Now Haley appears to be charting a course correction …

According to an online flyer distributed by the Palmetto Policy Forum – former U.S. Senator Jim DeMint‘s South Carolina-based think tank – Haley will be participating at a rally this week in support of school choice.

Well, someone named Governor “Hailey” will be participating … 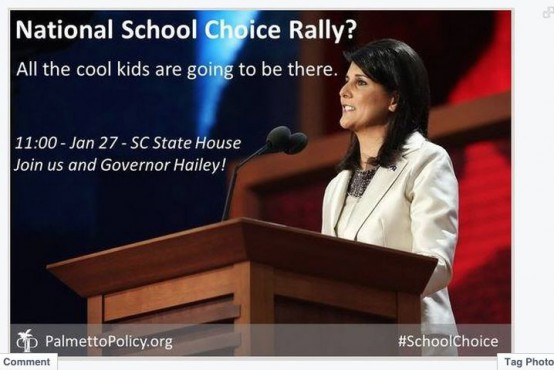 Let’s hope DeMint’s group is better at organizing a crowd than it is at, you know, spelling.

Anyway … it’s no secret South Carolina’s government-run school system is a disaster.  And it’s no secret that throwing more money at the problem has only made it worse.  So … what do we have to lose by trying something new?

There are any number of market-based reforms “Hailey” and state lawmakers could push this year, but the quickest and easiest solution would be expanding the state’s successful special needs scholarship program to include a broader universe of eligible children.  Oh, and making this program a part of permanent law (South Carolina is the only state in America to authorize school choice on a “provisional” basis as part of the annual state budget).

Scandal-Scarred Richland One Superintendent Gets ‘Exemplary’ Rating From ‘3rd Party’

Nikki Haley Is A Financial Disaster

The Scholastici: South Carolina Scandal Not About To Blow Over

At least the flyer didn’t say…

True. You get to link things like DeMint, Hailey, Haley, Schools, Cool.
Unfortunately, making education in SC worse, not better – isn’t that funny.

Just because you’re in SC, and you’re a TOTAL Obama-blind Dumb@$$…don’t assume the rest of us are…

I’ve been to other states (you must not have) and I’m quite superior, intellectually, to a majority of others…Not anything to brag about, just the truth.

So you need to speak for yourself if you are Stupid.

Funniest thing that I’ve read today. Bwaahaahaaa. That’s why the majority of SC voters think that Palin is a mensa.

So, what would you put in the common core history books about Obama?

Would SC voters agree with your rewrite?

I’d put in the “Common Core history book” that during the national debate about education standards, many people wrongly believed that Common Core included mandated history books and curriculum

And there you have it.

“all the cool kids”, willing to bet the average age of attendee hovers around 70. The only people who want to push public money for private schools are rich folks and those who don’t want to pay taxes.

that sounds like class warfare to me. if you want more for yourself you should really do some self reflection and try harder, pull yourself up by your bootstraps. isn’t that what you tell everyone else?

And I send my daughter to a public school. I’ve always agreed with you that too many parents don’t play enough of a role in their kids educations. Defending little Mary against Meany Teacher – etc – but taking all the well off white kids out of SC schools and leaving the rest behind is not reforming education. It’s a return to the very conditions that existed in the 1950s. Seperate but Equal was found unconstititional by the Supreme Court – and a “choice” program that essentially allows a household to receive a refund of their school taxes that are then applied to a private school means you’re finding a new way to enforce unequal education – across the state – and only the well off whites like us will get to do it – and the worse off will not. Look – you give me my School Taxes back – say about $1,300 a year – and I can apply that to the $5,000 annual tuition at Snotty Private U – great. I’m paying $3,700 and hey, that’s not bad. But some poor minority family who pays $700 a year in school taxes, they’re not going to be able to afford that delta – of about $4,300 a year. Hence, it’s exclusionary. We say it’s exclusionary based on economics – but let’s face it – who’s poor in this state, and who’s not.

Only a VERY SMALL percentage of “minority” families are intact, if you look at any credible data on demographics. It seems race – not all Americans – matters to you a lot…
That said: these African-American moms, likely get a refund, even when are not paying taxes, if there are children. And they are so much more likely to get other government subsidies and hand-outs, ESPECIALLY in SC.
That sinks your whole Stupid @$$ argument. . and is a good example of flaws in the the mythology of which guides you, and idiots like you…

I’m not saying they care about their children more. I’m saying pulling out all of the whites so they can go to private schools (or outside of district schools) at the expense of the districts is disadantagous to the minorities. You want the real issue with SC schools – this inane districts within counties. Other states have one county – one district. We break out counties down so that poorer districts stay poorer, and wealthy districts get all the resources. And forget the minorities for a minute – include with them less better off whites.

Then should you not be imploring Black parents to demand the same standards from their children, that intact families demand?

They listen to Democrat power brokers like Obama and ‘Pootlian…and they empower you exclusively w/ their vote. You’re the ones using them. Why do you misrepresent the truth to them, and allow them to harm themselves w/ the ignorance you feed them, generation after generation?

OK, now tell us why that is bad.

She was given an AWARD by the SC School Choice group in April, Dumb@$$….

If all the minority kids and non-Christian kids could afford the private schools “of choice”, then where will all the white Christian kids go when they flee those schools?

You don’t get it. That is why we are proposing tax credits. Minorities are poor. They can’t use tax credits. As a result we get the benefit of school choice without having to worry about the undesirables wanting space in our schools.

“All the cool kids” — do they need a hall pass, is there free parking, and will lunches and transportation be provided? How about a credit just for showing up?

The 11:00 is part of the Gypsy Queen’s shell game – much like her Texas two step with the gas tax and income tax

Win/Win for the Gypsy Queen

Sort of like —- “Did you fake it that time , darling?” the husband asked after making love to his wife. “No, dear,” she replied. “This time I really was asleep.”

Haley is the worst thing that could happen to the school choice movement. Promise to make it happen and then not even mention it. Tramp!

Wow, she has some big ole legs.

I choose public school with real teachers teaching facts and testing for retention… just like Jefferson.