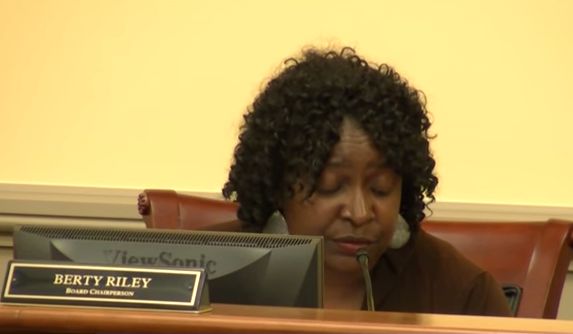 JASPER COUNTY MAY BE THE BIGGEST GOVERNMENT GOAT SHOW IN AMERICA

Ever wonder why that’s the case?

Well, here’s a sneak peek into how Jasper County handles its business – specifically a clip from a school board meeting earlier this month in which the district’s barely literate board chairwoman, Berty Riley, rammed through a new construction contract.

Never mind that none of the members of the board had even seen the contract before voting on it – or that Riley achieved her majority by yelling “let me see these hands up – I want to see them” at other board members who did not immediately raise their hands when the vote was called.

After the vote, Riley proceeded to have police officers remove an elderly white woman she deemed to be “disruptive” – as well as two members of the S.C. House of Representatives.

“If anybody else wanna be removed you can do it too!” Riley yelled as police escorted the woman (and the two lawmakers) from the premises.

As we’ve pointed out in the past, Jasper County loves to reward failure.  But its leaders also love to silence anyone daring to question them.

“While the district appreciates all of its volunteers, it is important that all are within the schools to be a positive influence on all of the students, faculty and staff at all times,” a statement from the district read.

S.C. Gov. Nikki Haley had a chance to investigate this district last September but took a pass – part of her ongoing devotion to the Palmetto State’s failed status quo.

As for this website we will continue to expose nonsense like this while pushing for universal parental choice … because no student should be forced to remain trapped in perpetually failing districts.

@fitsnews this is disgusting.. #ebonics