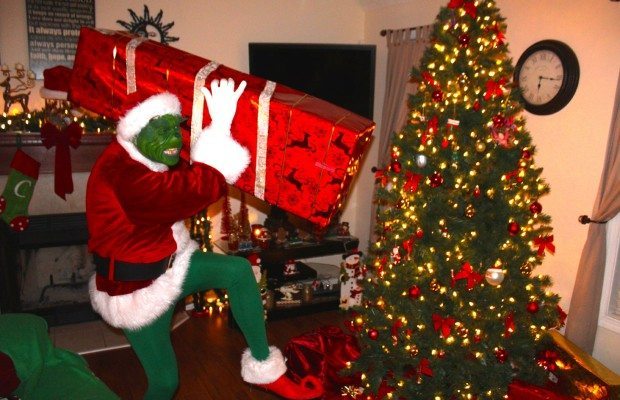 By FITSNEWS || South Carolina “Republican” leaders are up in arms after their annual Christmas party at the S.C. Governor’s Mansion was cancelled – three days before it was scheduled to be held.

And while staffers to S.C. Gov. Nikki Haley vow the event has merely been “postponed,” sources tell FITS the dates under consideration for the rescheduled event are all in January … which last time we checked is after Christmas.

Needless to say the GOP faithful – many of whom view the Governor’s Christmas party as the top social event of the year – are feeling “outraged and betrayed” by the snub.

Others were far more blunt …

“The whole thing is tacky,” one veteran GOP leader told FITS.  “People take time off work and buy new clothes to visit the Governor’s Mansion.  Then her staff pulls the plug 72 hours before the party.”

Attendees at the event – originally scheduled for December 15 – were informed late Friday of the cancellation via an email from Kurt Pickhardt, Haley’s political director.

Pickhardt blamed the cancellation on “the overwhelmingly positive response we received to the invitation to Monday night’s event, and space limitations of the area available for us to use at the (mansion) complex.” 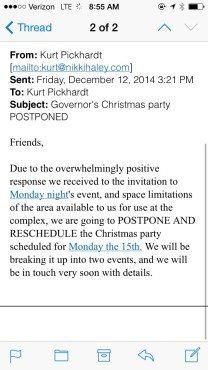 Pickhardt’s notification spawned all sorts of controversy, with many GOP faithful telling FITS they never received his email – telling us they first learned of the party’s cancellation via others’ social media pages.

Also, the reference to “two events” replacing the original party also prompted allegations of favoritism – with some “Republicans” informing others that they had been invited to a “lesser” event.

“I’ve seen this dog and pony show before,” one party activist told FITS.

Others claimed Haley was still planning to host an event at the mansion on Monday night – and that a select group of “Republican” leaders had been told to disregard the mass “dis-invite.”

“I wonder how many will show up Monday night anyway,” one GOP staffer told FITS.

Either way, the message was not lost on the GOP faithful.

“We’ve served our purpose,” the operative said. “She doesn’t need us anymore.”

That’s right … South Carolina “Republicans” have done their jobs for Haley.  Now that they no longer have anything she needs, she’s treating them accordingly.