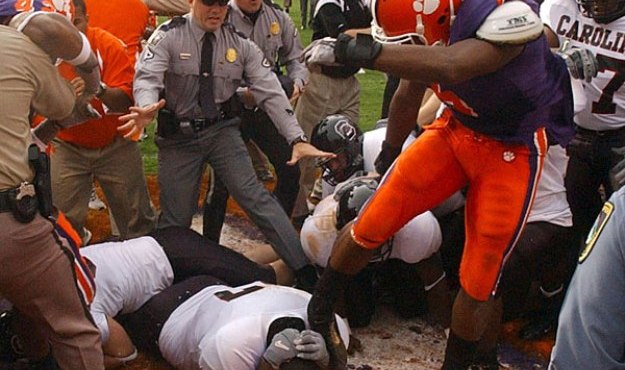 CAROLINA-CLEMSON MEET IN DEATH VALLEY ON ANNIVERSARY OF FIGHT

By FITSNEWS  ||  The last time the University of South Carolina football team took the field with someone other than Steve Spurrier at the helm was November 20, 2004 – the 102nd meeting between the Gamecocks and their arch-rivals, the Clemson Tigers.

It was a “down year” for both teams – with Gamecock head coach Lou Holtz struggling through his third straight mediocre season in Columbia (after winning back-to-back Outback bowls following the 2000 and 2001 seasons).  Meanwhile Tommy Bowden – whose Tigers were coming off a 9-4 season that included a Peach Bowl win over Tennessee – needed a victory over the Gamecocks just to become bowl eligible (and avoid Bowden’s first-ever losing season as a head coach).

Clemson got the win … but it wasn’t pretty.  In fact it was probably the ugliest win in Clemson history.  The on-field violence that erupted that afternoon in Death Valley at the tail end of Clemson’s 29-7 win didn’t just end one coaching career (and both teams’ seasons).  It put a permanent stain on this historic rivalry – which remains dominated by Clemson (65-42-4) despite a recent run of five straight wins by South Carolina.

In the official play-by-play of the game, a fourth-and-11 from the Clemson thirty-five yard line with 5:56 remaining in the fourth quarter went down as follows …

Of course what happened after the play didn’t make the box score.

Typically such skirmishes are broken up quickly – but this one wasn’t.

In a matter of seconds both benches cleared, with players exchanging blows up and down the field.  Among the most vicious hits?  A sucker punch from South Carolina running back Daccus Turman against Clemson’s Duane Coleman – and Clemson running back Yusef Kelly infamous foot to the head of a defenseless Gamecock.

“It was a fight,” Kelly said afterward. “Everybody knows things like that happen during a fight.”

After the brawl, Kelly paraded in front of the Clemson student section with a captured Gamecock helmet – tossing it jubilantly into the stands.

“They’ll have something to remember me by,” he said.

As the violence escalated, it took dozens of S.C. Highway Patrol and local Sheriff’s deputies several minutes to break up the fights and separate the players.  Things got so bad at one point that Jefferson-Pilot announcer Rick “Doc” Walker suggested the authorities use pepper spray to contain the violence.

“They need mace,” Walker said as punches flew between Tigers and Gamecocks in the stadium’s north end zone. “Now you gotta get the sauce in.”

Miraculously, the fight never spilled over into the crowd.

Both teams surrendered bowl bids in the wake of the brawl.  And numerous players were forced to miss games the following season.  Also, both schools coordinated a hand-shaking ceremony between players prior to the kickoff of the 2005 game in an effort to promote better sportsmanship.

As for the rivalry (the third longest uninterrupted series in football), Clemson continued its domination of South Carolina during the first four years of the Spurrier era – taking three of four from the Gamecocks from 2005-08.  That prompted this website to declare the series a “Rivalry in Name Only.”

In recent years, Carolina-Clemson has been about the talent on the field – not low-brow extracurriculars.  Last year’s game was a Top Ten matchup, while the 2012 game was a Top 15 affair.  In 2011, both teams were ranked in the Top 20.  But the superstars who elevated their respective programs (notably South Carolina’s Jadeveon Clowney and Clemson’s Sammy Watkins) are playing on Sundays this year – taking the level of competition in the rivalry down a notch.

For those of you keeping score at home, Dabo Swinney‘s No. 23 Tigers (8-3, 6-2 ACC) enter the game 4.5-point favorites over Spurrier’s unranked Gamecocks (6-5, 3-5 SEC).  Neither team is going to make the inaugural NCAA football playoff, but both teams are bowl eligible.  No longer a primetime draw with national implications, this year’s game is all about pride.

Deshaun Watson Questionable For “The Game”