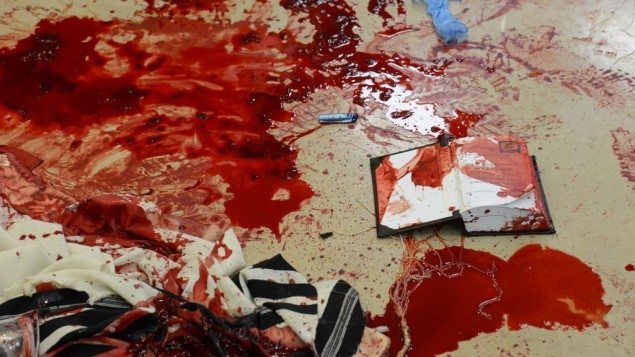 By TAYLOR BROWN || Feelings about Israel and the area that calls itself Palestine seldom strike a tone of indifference.  After hearing about the latest terrorist attacks perpetrated by the Popular Front for the Liberation of Palestine, or PFLP (a group labeled as a terrorist organization by the United States, Canada, the European Union and others) this love/ hate extremism was crystal clear.

Two PFLP terrorists entered into a West Jerusalem synagogue (not a mosque as CNN first falsely reported) armed with guns, axes, and butcher knives and killed four worshipers, one policeman, and injured many more — some critically.

Out of the victims, three of the deceased are American citizens, one is a citizen of the United Kingdom and one is a Druze Officer.  The four rabbis, who were doing nothing other than peacefully praying in a holy place, were shot at point blank range or hacked apart.  These terrorists slaughtered men in a place of worship like they were nothing more than animals.

The Druze Officer was shielding a fellow police officer when he was shot in the head and just succumbed to his injuries only hours ago.

Despite human lives being snuffed out, Mustafa Barghouti (from the Palestinian Legislative Council) responded to this act of terror by saying that Israel is “responsible for this bloodshed.”

Excuse me?  Last time I checked, jihad is never justifiable.  He continued by hinting that this will continue unless “Israel accepts immediately to end the occupation.”  I fully expect that he’s right in that regard — this attack follows two weeks of rising tensions and other fatal attacks.

Ok, so one douchecanoe is happy over people dying, but doesn’t the rest of Palestine reject these acts of terror?

Nope.  The bastards, who murdered four praying people, one brave police officer, and wounded seven others (three in critical condition), are being labeled martyrs and heroes.

All of this seems very reminiscent of the reaction from Palestine after 9/11.

Israeli primer minister Benjamin Netanyahu was right in his saying, “The world watches this massacre but does not demand that Palestinians stop their incitement against Israel, which is the root of this violence. I expect to hear that very same uncompromising condemnation.”

Will we hear that from this website’s founding editor?  I wonder …

The area that calls itself Palestine, and it’s many terrorist organizations are trying to operate with the theory of “catastrophic terrorism” as the goal, meaning they seek to kill as many civilians as possible in the largest and most extravagant way possible. And while there have been misdoings and cycles of revenge carried out by both sides, terrorism can’t be vindicated.

I hope Israel swiftly deals a sizable amount of justice on those who carry out these militant extremist acts. Israel, after all, has an OBLIGATION to make sure that those responsible for today’s senseless attack pay for their crimes. I suppose demolishing the attackers’ homes is a good first step.