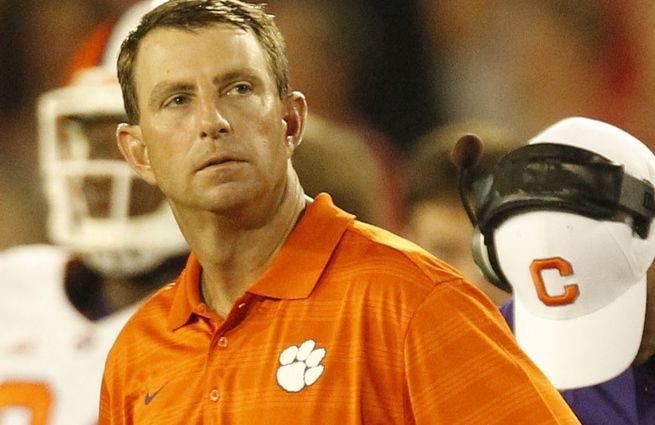 CLEMSON COACH GETTING CONSIDERATION IN GAINESVILLE?

By FITSNEWS || Clemson University head football coach Dabo Swinney is among the names being bandied about as a potential successor to ousted Florida head coach Will Muschamp – who was told this weekend he will not return to coach the Gators in 2015.

And while there’s been plenty of speculation as to where Muschamp might wind up, could Swinney follow him to Gainesville?

In six-and-a-half years at Clemson, Swinney has posted a 58-26 record – including a 2011 ACC championship and back-to-back Top Ten finishes and eleven-win seasons in 2012 and 2013.  Of course he was 19-15 prior to the arrival of offensive coordinator Chad Morris – whose up tempo offense rewrote the school record book thanks to the play of quarterback Tajh Boyd and wide receivers DeAndre Hopkins and Sammy Watkins.

The 44-year-old Birmingham, Alabama native is being eyed by Florida thanks to his prowess on the recruiting trail (which has been aided capably by S.C. Gov. Nikki Haley, a Clemson alum).  For six straight years, Swinney’s Clemson classes have ranked among the Top 20 in the nation – including a pair of Top Ten classes in 2011 and 2012.  He’s also guided the Tigers to a pair of Bowl Championship Series (BCS) appearances – including a 2014 Orange Bowl win over No. 7 Ohio State.

Swinney signed an eight-year, $21.1 million deal with Clemson in January raising his base salary from $2.2 to $3.1 million a year (with guaranteed annual raises moving forward).  Not only that, the contract included a $5 million buyout clause – meaning Swinney would have to pay Clemson that tidy sum in the event he took another job during the first three years of his new deal.

Is Florida really going to shell out that kind of cash for Swinney?

Philadelphia Eagles head coach Chip Kelly would probably be Foley’s top choice for the job – but he’s encountering tremendous success in the NFL. The 49-year-old former Oregon head coach is also in the second year of a five-year contract paying him $32.5 million.

Chad more likely, but no for both. “@fitsnews: Dabo Swinney To Florida? – http://t.co/S2gICVVKXQ”

@fitsnews @RubrChickens prolly needs to stay in the ACC. Little easier to win games. Florida would be a career buster for Dabo

@mull86 @fitsnews Given Florida is in our division I wouldn't know whether to beg him to stay or help him pack his bags.

Dabo to Florida is the most ridiculous thing I've ever heard @fitsnews Florida fans should be offended. #outofhisleague

@fitsnews That would be awesome, we would never lose to Florida again.