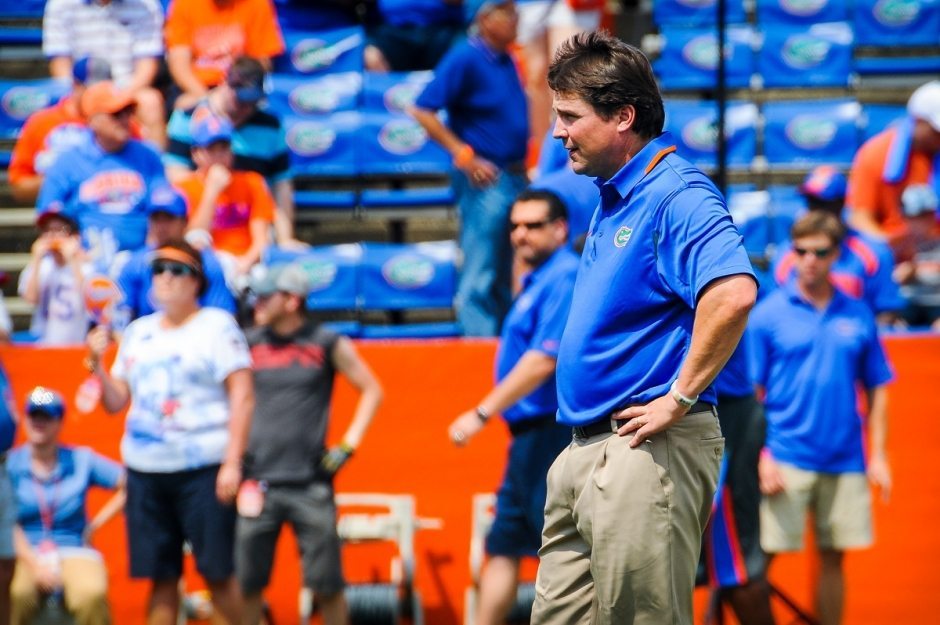 COULD ANOTHER EX-FLORIDA COACH WIND UP AT SOUTH CAROLINA?

By FITSNews  ||  University of Florida head coach Will Muschamp is unlikely to hold onto his current job title much longer.  After a disastrous 4-8 season in 2013, Muschamp’s Florida Gators needed to show something last weekend on the national stage against No. 3 Alabama.

And they did show something … just not anything good .

Florida surrendered 645 yards and 45 points to the Crimson Tide – and it would have been worse had Alabama not committed four turnovers (including a fumble returned for a touchdown by the Gator defense).

The bottom line for Muschamp is simple: He needs to win at least one of his next two games in order to keep his job.  If he loses on the road against Tennessee on October 4 – and at home on October 11 against LSU – he’s toast.

Meanwhile in Columbia, S.C., University of South Carolina head coach Steve Spurrier is looking at some incredibly troubling numbers.  The Gamecock defense has been shredded to the tune of 36 points a game through its first four contests.  Coordinator Lorenzo Ward‘s unit ranks No. 106 in scoring defense (out of 128 FBS programs), No. 111 in total defense and No. 116 in passing defense.

We understand that Ward has lost some insanely talented players from last year’s squad – most notably No. 1 overall NFL draft pick Jadeveon Clowney – but South Carolina is still a major college program isn’t it?  One that awards scholarships, right?

If (and increasingly “when”) Muschamp loses his job in Gainesville, he may not have to wait long to find a new gig.

Multiple sources close to the University of South Carolina football program tell FITS the 43-year-old Georgia native is being eyed for a job as the Gamecocks’ next defensive coordinator.  In fact our sources say Spurrier is lobbying hard for Muschamp’s hiring owing to two things: 1) Muschamp’s previous success as a defensive coach and, 2) the friendship the two SEC East rivals have struck up in recent years.

Muschamp – who played his college ball at Georgia – has built elite defenses at LSU, Auburn and Texas.  In fact his 2003 LSU defense – which helped power Nick Saban’s Tigers to a national championship – is regarded as one of the best defensive units in college football history.

Muschamp and Spurrier also get along famously – dating back to a courtesy call made by Muschamp after he took the Florida job in December 2010.

“Will is a good guy, a good coach and a good family guy,” Spurrier said this summer as the two coaches flew together to Bristol, Connecticut for an ESPN event.

The admiration is mutual.

“I consider him a friend, certainly, but a guy that I look up to,” Muschamp said of Spurrier.  “Over the course of his career as a player and coach at the University of Florida, it’s absolutely amazing what he’s accomplished. I enjoy being around Coach Spurrier. He’s as quick-witted as anyone you’ve ever been around. I appreciate his honesty in how he handles his business, and what he’s done at South Carolina has been outstanding.”

“He’s a Hall of Fame football coach and it’s an honor to be able to talk to him about our profession and to build a friendship,” Muschamp added.

Spurrier has been vocal in his criticism of South Carolina’s defensive performance so far this season (it’s impossible not to be critical) – but he’s avoided going after Ward, who took over the reins of the Gamecock defense from Ellis Johnson following the 2011 season.

Obviously anything can happen over the next month – and beyond.  Both Muschamp and Ward will have opportunities in the coming weeks to remove themselves from their respective hot seats, although if the Gators lose to both Tennessee and LSU there’s no way Muschamp will still be roving the Gator sidelines when Missouri comes to “The Swamp” on October 18.

As for Ward, if a Gamecock defensive collapse results in a loss to either Missouri or Kentucky – expect the calls for his ouster to intensify.

.@fitsnews Would be a good get, but I wonder to what extent the 2015 class that Ward has built would suffer

@fitsnews it seems unlikely either change happens during the season. But a intriguing scenario it is

@fitsnews @LOHDgamecocks I don’t believe anything from that site

@fitsnews I think you may be stretching it a bit with #muschamp love by Spurrier. But your political news rep gives you benefit of doubt.