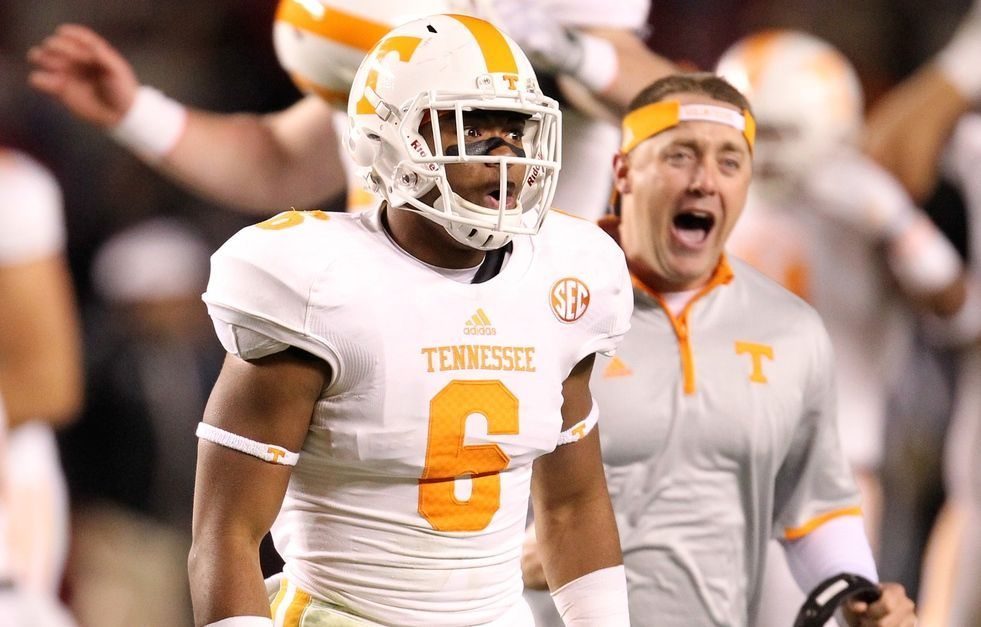 By FITSNEWS || For the third time this season, the University of South Carolina football team blew a double-digit lead in the waning moments of the fourth quarter. But this latest – and greatest – meltdown truly put the artistry in choking.

Up 42-28 after junior running back Brandon Wilds ripped off a 70-yard touchdown run with less than five minutes remaining in the fourth quarter, Steve Spurrier‘s team somehow still managed to find a way to lose – leaving the head ball coach literally speechless.

“I don’t need to take any questions,” Spurrier said after the game. “You guys watched it, and I just need to get out of here.”

And with that, he left the podium … less than a minute after he got there.

Spurrier did manage to admit “I’ve done a lousy job of maximizing what we think we’ve got here,” adding “we can score a few points but we find a way to lose.”

Indeed they do.  South Carolina – whose fans frequently mock arch-rival Clemson for its late-game collapses (a.k.a. “Clemsoning”) – has no room to talk after the Volunteers pulled off the most improbable of comebacks.

After Wilds’ touchdown run sent most Tennessee fans heading for the exits on a cold night at Williams-Brice Stadium, Volunteer quarterback Joshua Dobbs took over the game.  Dobbs marched his team down the field on a 10-play, 70-yard drive that he capped with a three-yard touchdown run.

Tennessee failed to recover an onside kick, but head coach Butch Jones had three timeouts remaining – and used them on successive plays as his defense stuffed South Carolina.

Tennessee retook possession with 1:23 remaining and embarked on a nine-play, 85-yard drive – this one ending with a nine-yard touchdown pass from Dobbs to sophomore wide receiver Jason Croom that tied the game 42-42 with only eleven seconds left.

Dobbs completed 23 of 40 passes for 301 yards with two touchdowns and one interception.  He also ran for 166 yards and three scores in his first start of the season.

After a field goal on its overtime possession, Tennessee’s defense recorded back-to-back sacks of South Carolina quarterback Dylan Thompson – forcing South Carolina to attempt a 58-yard-field goal that never had a chance.

Thompson completed 20 of 32 passes for 347 yards and two touchdowns – both of which went to Pharoh Cooper, who finished the game with eleven receptions for a career high 233 yards.  Cooper also threw a 30-yard touchdown pass to Wilds.

It wasn’t enough, though … not with South Carolina’s porous defense giving up a whopping 645 yards to the Volunteers.

Losers of four of their last five, with one more defeat the Gamecocks (4-5, 2-5 SEC) will have lost as many games this season as they lost in the previous three seasons combined.

That would mean a team that began the year ranked No. 9 in the nation might not even make a bowl game.

No wonder Spurrier was at a loss for words …

Reece: The State Of Gamecock Football