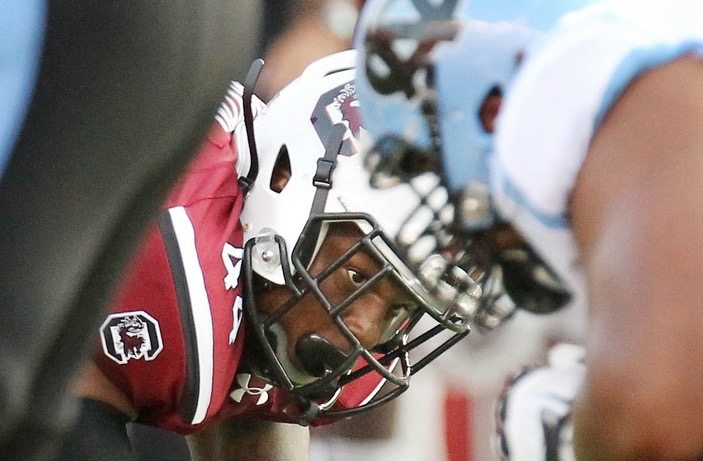 The game – scheduled for September 3 in Charlotte, N.C. – will pit a pair of teams looking to reverse recent fortunes.

Under head coach Steve Spurrier, South Carolina enjoyed a period of unprecedented success from 2010-13 – winning an SEC East championship and scoring three consecutive Top Ten finishes (including a No. 4 ranking at the end of the 2013 campaign).

Of course the Gamecocks fell apart in 2014 …  completely … losing fourth quarter leads against SEC East rivals Missouri, Kentucky and Tennessee en route to a 7-6 record.  Spurrier’s recruiting has fallen off in recent years, too … which is one reason his team is being written off by pundits heading into 2015.

North Carolina stumbled to a 6-7 mark in its third season under head coach Larry Fedora – who is under tremendous pressure to put together a successful season after watching the Tar Heels get progressively worse after posting an 8-4 record in his first season in Chapel Hill.

So yeah … something’s gotta give.

As for Belk?  The company – which recently shuttered a Columbia, S.C. retail storefront – saw overall sales climb by five percent to $4.11 billion last fiscal year.  In addition to sponsoring the Charlotte kickoff classic, the company also sponsors a postseason bowl game at Bank of America Stadium.

Belk took over title sponsorship of the game in 2011 from Meineke Car Care Center – and is under contract to host the game through 2019.

North Carolina enjoys a 34-18-4 advantage in the series, although South Carolina has taken two in a row – including a 27-10 win in both schools’ 2013 season opener.